The beeping of horns and revving of engines meld into the background of our conversation. Hurtling through the multi-lane traffic, wind roaring at 30 kilometers per hour, with no barrier between my skin and the outside world, I did not anticipate that a motor-taxi driver in Ho Chi Minh City would become my primary teacher on the history and identity of the Chinese Vietnamese, or Hoa (华, “Chinese”).

“Chị là người nước gì?” he asks as soon as we started driving: Where are you from? Though I’ve had to answer the question over and over growing up in America, it’s the first time I had such a conversation on the back of a motorbike. At my language school in Hanoi, I studied the vocabulary for countries, asking my teacher the words for “Chinese American,” and, eventually, rehearsing the simplest phrase that allowed me to articulate my identity—“Mỹ gốc Trung Quốc,” literally, “America China.” But it turns out, my driver already understood these complex questions of home.

“Ah, zung gok?” he responds in Cantonese. “Where in China are you from?” We were speeding through District 11: Unlike Hanoi in the north, which has virtually no Chinese population, there are four districts in Ho Chi Minh City—still often known by its original name Saigon—populated by the Hoa, their temples, food stalls, and restaurants. We were headed towards District 5, the epicenter of the community and location of Chợ Lớn, one of the world’s largest Chinatowns.

In Chinese, this neighborhood is known as Di’an (堤岸), or “embankment,” while the Vietnamese name translates into “Big Market.” The names speak to the multiple histories of the neighborhood: In 1778, the community was begun by Hoa loyalists of the Nguyen lords, fleeing the Tay Son rebels in the Biên Hòa region. Settling beside the Saigon River, the Chinese built high embankments, founding Chợ Lớn.

Today’s Chinatown has undergone numerous reconstructions in its history. Formerly a city in its own right, Chợ Lớn was eventually merged with Saigon to form Vietnam’s most populous metropolis. The Hoa make up over half a million of its population today—the largest Chinese community in Vietnam, already home to one of the world’s largest Chinese diaspora.

During the American War in Vietnam, Chợ Lớn was the crux of a thriving black-market trade courtesy of the the US Army. Today, the area’s central market is lined with booths selling clothes, household items, and dried Chinese herbs. Each year it attracts thousands of tourists, joining more than 2.5 million annual visitors to Vietnam. However, it’s uncommon for travelers to stay in Chợ Lớn, since most prefer the high-scale restaurants, shopping centers, and attractions of District 1.

“My parents are from Guangdong; Toisan,” I tell my driver. With that, his story too began to unfold: His parents also came from Guangdong in the 1930s, a time when China was so poor there was barely enough to eat. “Do you know how much a kilogram of rice would cost?” I realized that his parents are the same age as my grandfather, who has told me about growing up under Japanese invasion and war in China.

“A lot of Chinese are here in District 11 and District 6,” he observes, and points to a white building with clothes drying on every balcony: “That’s the apartment I live in, on the third floor. There is especially a lot of Teochew people in these districts.” The Chinese diaspora in Vietnam includes Cantonese, Teochew, Hokkien, Hainanese, and Hakka minorities, each with their own temples and associations dispersed throughout the different districts. Yet, because the prevalence of the Guangdong diaspora, many Hoa learn to speak Cantonese by immersion. There are even unexpected similarities between words in Vietnamese and Cantonese; as a Cantonese speaker with limited Vietnamese, I could puzzle out certain meanings. Mỹ gốc and mei gok (America), Trung Quốc and zung gok (China) are just the tip of the iceberg. 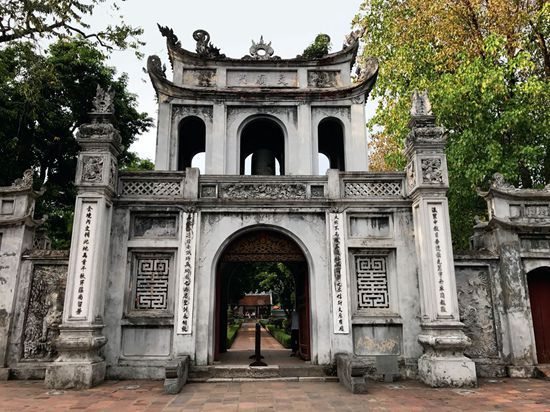 Many of these loanwords were absorbed into Vietnamese from China’s 1,000-year administration of its southern neighbor, starting with Emperor Qin Shihuang’s conquest of the Tonkin region in the second century BCE, followed by a temporary period under the Ming in the 13th century.

Some Chinese in the Tonkin region are descended from the ancient migrants and refugees. Later immigrants came as court officials, merchants, and even ancestors of Vietnamese ruling clans. In the early 20th century, half a million Cantonese arrived in French-ruled Vietnam as laborers and businessmen, and were eventually joined by refugees from the Japanese invasion and conflicts among Kuomintang, Communists, and warlord armies in China.

Prospering from their business networks and global connections, the Chinese minority gained political influence, even while they incurred occasional retaliation from the Vietnamese majority, including the massacre of over 10,000 Hoa and destruction of the newly built Chợ Lớn in 1782 , as well as the confiscation of Hoa property and expulsion of suspected Chinese sympathizers by the Communist government in the 1970s. Today, the communities have achieved a shaky truce, with centuries of shared history.

Over the hum of engines, entering a roundabout where dozens of motorbikes weave through traffic together like a school of fish, my driver tells me he has tried to leave Vietnam seven times by boat.

“Since I was 13 years old. But every single time they caught me and I was turned back.” I let the wind fill the silence that followed his words, until he continues. “Back then, there was barely any food to eat. People ate saa, mai, and guk”— sand, rice grain, and rice husks. “Do you understand what that means? It’s sand mixed with rice and the shells.” He laughs at how absurdly difficult it was.

He’s vague about times and places, but I deduce that his story is situated in the greater one of the American War, when an estimated 250,000 Hoa fled as “Vietnamese Boat People” after the Fall of Saigon, with emigrants heading to Hong Kong, Malaysia, and Indonesia, even as far as the US, France, and Australia. Today, Chinese Vietnamese form a sub-demographic of their own in the diaspora, while descendants of the million or so refugees who eventually settled in the US are active chronicling their unique experiences and nuances of identity.

The driver turns right and pulls up outside a temple, where an elderly Hoa vendor prepares rice noodles. Soon, there will be parents and children stopping by his stand on their way to the adjacent public school, where Fujianese, Cantonese, and Mandarin classes are held each week. I slowly slide off the bike and hand the green helmet back to the driver.

There was no way to appropriately end our conversation; we thank each other and continue on our ways. In such a large a diaspora, two members momentarily meeting to exchange similar yet different stories could be a common coincidence—though perhaps one that doesn’t usually take place on the back of a motorbike.

Of Motorbikes and Memories is a story from our issue, “Vital Signs.” To read the entire issue, become a subscriber and receive the full magazine. Alternatively, you can purchase the digital version from the App Store.