Viral Week is our weekly round-up of the weekend’s trending memes, humor, rumor, gossip, and everything else Chinese netizens are chatting about. Think of this as an antidote to tariffs and trade talks.

This weekend, netizens were re-assessing the Beijing Olympics legacy, wondering what happened to Reddit, and casting a cynical eye over the entertainment industry’s crackdown on exorbitant fees. But first…

Ten years after the controversy, opening ceremony architect and film director Zhang Yimou revisited the topic of Lin Miaoke’s singing performance, later revealed to be a recording of another girl, Yang Peiyi, to express his regret. Not long after his response in Tencent’s documentary show 十二邀, the topic became viral in Weibo. Some expressed their sympathy for Lin and Yang, while some netizens mentioned that “it doesn’t matter whether the singing was fake or real, the video still brings me to tears.” 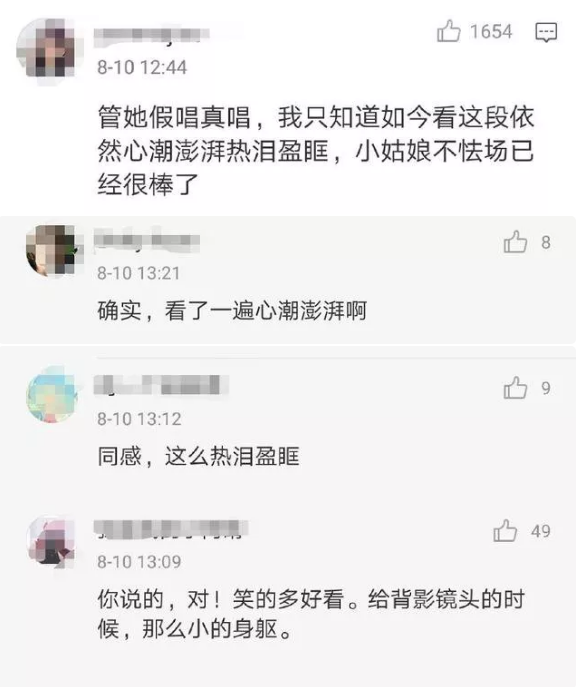 The video still brings me to tears (Zaker)

Meanwhile, netizens are also apologizing to Liu Xiang, the now-retired hurdler who pulled out from the 2008 Olympic due to an injury. Ten years after expressing their anger and disappointment, netizens’ apologies to Liu Xiang are stacking up. 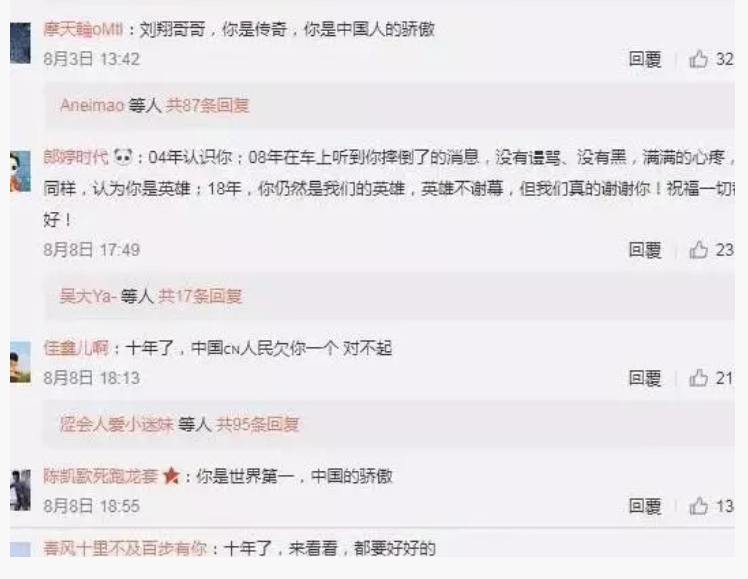 Some of the apologetic comments (Sohu)

The self-styled “front page of the internet”—aka Reddit, the world’s 10th most-popular website—is no longer accessible in China. News of the block, which apparently occurred over the weekend, has confused many Reddit users, who point out that the site has never been particularly popular with Chinese, who have their own forums and BBS on which to rant and rave about various topics.

A Fudan University professor puzzled over the ban, which seems to reflect a recent trend for blocking overseas websites which were never particularly popular in China anyway: “Not many people use Reddit in China…Decisions like this make many people uncomfortable. There nothing positive to be gained from it.” Unfortunately, that post is also now no longer with us…

A controversy over tax evasion that overspilled into a debate over the allegedly exorbitant fees paid to big-name actors for their film and TV work has resulted in a multi-corporate statement vowing to cap their fees.

Streaming sites, including iQiyi, Youku and Tencent Video, banded together with various production companies to cap fees for leading roles at 1 million RMB per episode, with contractual terms limiting any total payments over 50 million RMB. The statement, entitled “Resisting Unreasonable Pays & Rejecting Unhealthy Industry Trends” (抑制不合理片酬，抵制行业不正之风) is something of an easy win for the entertainment industry, who get to pay less for the same, while virtue-signalling their support for the government’s anti-vulgarity campaign, which includes materialism and idol-worship among its many, many targets.

It appears to be a popular move. “Producers tend to take advantage of celebrities’ fame for profit,” movie critic Cheng Qingsong told the Global Times, adding that the sky is blue and “companies are not into art appreciation.”

A 19-year-old high school graduate in Zhenjiang, Jiangsu province is paying a high price for his decision to “punish” six wrongly parked cars.

According to the Yangtse Evening Post, the student (known only as Huang) keyed the doors, hoods and trunks of six cars that were illegally parked, snapping their windshield wipers for good measure, after growing irate at the vehicles for blocking traffic. But his vigilantism landed Huang with 15 days’ detention, a fine of up to 1,000 RMB, and a bill of around 100,000 RMB to repair the cars, which included an Audi, Mercedes Benz, BMW and Land Rover.

While his university enrolment may now be in doubt, Huang is now considered a hero to some for bringing parking violators in their fancy foreign sedans down to size, if only temporarily.

Blind dates often go wrong, whether it’s down to bad fashion, dull conversation, or awkward restaurant choices. But a Chongqing man blames a waitress for his shattered dreams, after ordering a kung pao chicken and a discounted plate of crayfish. According to the angry review he left on Dazhong Dianping, the “date was totally destroyed by the restaurant” when the waitress pronounced “here is your crayfish special, enjoy” when serving the 38 RMB dish. That was enough to outrage his female companion, who accused him on being stingy (dates and discounts are, naturally, incompatible).

The restaurant avenged the review with a 1,000-word public letter (“To the netizen named as ‘Xizhuang Baotu’: You behave like this and want to find a wife?”) which they hung outside their entrance. “There was nothing wrong with our service, but you gave us a low rating and scolded all of us,” the letter fumed, adding, “You are the worst!”

The reviewer remains unmoved. “It’s bad judgment for the girl not to accept me,” he told a journalist. “And what the restaurant did was just a publicity stunt. So I will just leave my bad comment up.”

The tragic story of a Mr. You has highlighted, once more, a pervasive culture of discrimination toward health issues in the workplace. A senior manager at a Xiamen logistics company in Xiamen for the last 24 years, You had 25,000 RMB a month until he was diagnosed with liver cancer in 2015. The following month, the company slashed his salary to 1,200 RMB a month, a decision the company justified by pointing to local regulations. Their decision was backed by a labor dispute arbitration committee, which rejected his claim, but You has already filed a lawsuit in response, and online opinion is backing him.