“Marry a foreign woman,” suggested the stencilled signs, which circulated on Weibo last month. “Certifiable by Civil and Foreign Administration.” The kicker: “One Belt, One Road Project.” More than just a belt, more than just a road, President Xi Jinping’s flagship infrastructure initiative is now being embraced by services exploiting a relatively new market: overseas brides.

Companies offering “foreign matches” have long existed, often in a legal gray zone, but their confident resurgence represents a small, if growing inclination toward interracial marriage in China—from none in the Mao era to tens of thousands today.

Although many still conform to a common stereotype (Chinese female, Caucasian male), pockets of diversity are beginning to appear—not just within China, but in its growing expat communities, especially countries like Uganda, Ethiopia, and Ghana, where Beijing has invested in multiple infrastructure and mineral extraction deals.

In 2011, various images showing Chinese men with their African partners began going viral. “What a great Shandong man! A great Chinese man!” enthused commenters. “A wealthy Sichuan businessman who married last year’s Miss Kenya!!!” wrote another. “Strongly recommend!!!” Many of the observations from netizens displayed excitement at the idea of their compatriots “conquering” women abroad; other views ranged from the odd to offensive to downright deluded: “Large-scale marrying of African women can effectively solve China’s male-female sex-ratio imbalance problem!”

This uptick was not always viewed so positively. In Uganda, according to the Uganda Investment Authority, China accounts for almost 50 percent of foreign investment, and Chinese investors, traders, and contractors all look for local wives. Ugandan immigration officials believe that an increasing number of these expats are simply using these unions to gain residency, and expand their business. Some are deported; others simply desert these families when they return to China. “Even our Ugandan women are accepting to [reproduce] with these men,” one official lamented to a parliamentary committee. 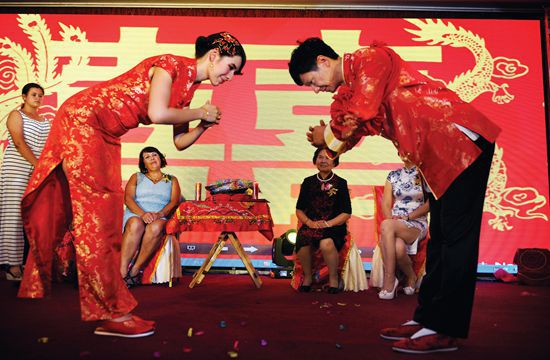 A Chinese-Bulgarian wedding held in Urumqi in 2015 (VCG)

Back in the motherland, though, the ratio is reversed: African men are mainly seeking relationships with Chinese women, especially in southern cities like Guangzhou, which has a district so populous with sub-Saharan traders it is known as “Little Africa” or “Chocolate City.”  There are no firm figures for these Afro-Chinese unions, but anecdotes of visits to markets and wholesale warehouse in the vicinity suggests that, at the least, thousands of foreign businessmen are (or hoping to be) married to Chinese women. For some, it’s love; for others, such as those who prefer women who don’t fit the traditional beauty standards of Chinese men, there’s an element of mutual serendipity. And of course, for many, it’s a matter of good business.

Around 20,000 to 200,000 male migrants, from countries like Nigeria, Kenya, Angola, Guinea, and Somalia, have helped sire a sizeable generation of mixed-race children in Guangdong province—one large enough to have its own community leaders and international schools. Some wonder at the promise this population could bring to future Sino-African relations, or even domestic politics (“Will China Ever Have a Black President?” an optimistic op-ed on a Chinese news site recently asked). But the vagueness of the figures highlights a host of issues which affect this burgeoning interracial community.

One is economic: Although Sino-African trade reached a peak 198 billion USD in 2012, and African heads of state are regularly courted in Beijing as “old friends of China,” there are many on the mainland who do not share such a positive view of Africans, and even regard the continent’s relative lack of economic progress as indicative of a racial failing. Former University of Hong Kong professor Adams Bodomo has pointed out that this view is outdated, at the least: As many as 40 percent of Africans in Guangzhou have university degrees or PhDs; many speak Chinese, run their own business, and pay taxes. Moreover, those who treat China as a place to “disappear” run the risk of detention, a large fine, and having to pay their airfare home.

Nevertheless, some of this local attitude has seeped into official policy. While state media regularly celebrates the “win-win” diplomatic relationships, local officials are not always so friendly. No one knows exactly how many foreigners there are in Chocolate City, partly because many overstay their visas. This has prompted police to crackdown on illegal immigration; in turn, some Africans view having a Chinese partner as a form of “protective umbrella,” a term for corruption typically applied to businessmen seeking official backing.

For immigrants, marriage to a local is a ticket to success, if not actual citizenship—in 2011, a raft of measures was introduced to control immigration in Guangdong, and the Guangzhou Public Security Bureau decided not to grant married Africans spousal visas. 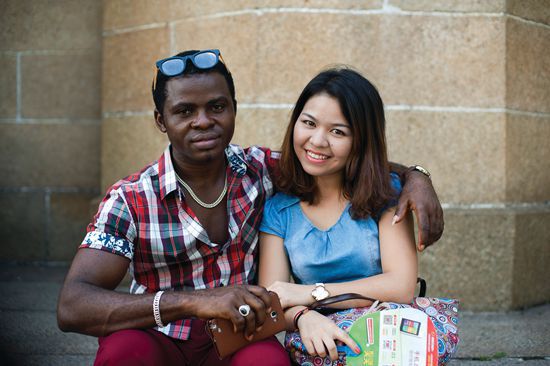 Chinese relatives don’t always subscribe to the view. “I know three or four relationships where the couple had expected it to lead to marriage, but as soon as the Chinese family met the African boyfriend, they had to end it,” One Nigerian husband told a researcher for the University of Witwatersrand’s China-Africa Reporting Project. Unless the bride is from a particularly poor rural area, “Marrying a black person is still marrying down in China.” Mixed in with mainland society’s general ignorance toward Africa are cautionary tales: Bigamists with wives and children back home; deadbeat dads who go on “business trips” only never to return.

Despite (or perhaps because of) this distrust, many Sino-African unions are based on a hard-nosed mutual interest in social mobility: the African partner might supply capital and contacts overseas to open an export business, while their Chinese spouse deals with local officials and suppliers. For most of Guangzhou’s huge population of internal migrants—as many as eight million, according to some estimates—judgment from prejudiced relative or neighbors at home can be safely ignored. For various cultural reasons, though, Chinese men rarely date African immigrants, according to research by Gordon Matthews, anthropology professor at the Chinese University of Hong Kong—even if they show far less aversion to using East African sex workers.

Instead, Chinese seeking foreign wives have a preference (or, at least, aspiration) for Caucasian women. At the top of their wish-list are North Americans and Western Europeans; many would be more than happy to settle for a leggy Russian or blonde Ukrainian, though. More than 800,000 follow “Ulove,” the Weibo account of the recently rebranded and purportedly successful matchmaking website “Ukrainian Love.”

Ulove was founded by “Max” Mei Aisi, a xuezha (“academic dreg”) who flunked his gaokao then moved to Ukraine aged 18 in a desperate attempt to find a university to issue him a degree, a prerequisite for marriage among traditional Chinese families (Mei admitted to Chinese media that he’d confused the countries, and originally thought he’d be studying in Uganda).

Mei’s subsequent rags-to-riches tale went viral after it was amplified by publication in the People’s Daily: After finishing his studies, Mei met a 16-year-old called Dasha and quickly made a move. Now married with a child, Mei’s pitch on Ulove is that if he can do it, anyone can (really). Client only need pay between 69,000 to one million RMB (10,800 to 157,000 USD) and one million RMB for Black Gold Membership (flight to Kharkov not included) to join the interracial love train.

Mei’s pitch has raised considerable eyebrows, aside from the fact that the cheapest package buys only single “mixer,” with sushi buffet, plus an array of potential female Ukrainian wives and their translators—in effect, little more than a speed date. Some have suggested that Mei’s marketing is better than his matchmaking, and his “successful business” and “400,000-dollar luxury apartment,” described in credulous reports by state media, are simply a Chinese restaurant and regular Ukrainian home. But there’s no denying the enthusiasm many men expressed online at the idea of scoring a young white wife (prominently displayed on Ulove’s Weibo page, reclining in a bikini) and mixed-race child, or their wish to replicate such supposed success.

For some men in China, under the cosh of unrealistic marital expectations—houses, cars, high income, a “bride price”—the idea of diaosi nixi (“the nerd strikes back”) is a potent incentive for interracial marriage, says a reporter for business site Jiemian News. Raised on an educational diet of “national humiliation”—the Sino-Japanese and Opium Wars, followed by invasion and occupation during World War II—but ill-prepared for equal interaction with the opposite sex, some see “the conquest of a Caucasian woman [as] an antidote to this still-pervasive [anxiety] and a trophy conferring on her husband not only the ability to continue his Chinese family line…[at] his prowess, his triumph over history.”

What’s at stake, then, may be less romance than revenge. The phenomenon is emphasized by China’s indomitable economic rise, and the materialism it has engendered: On Ulove, clients refer to potential brides as jipin or “high-end products.” Marriage, as ever, aligns itself with money—and politics. Touting the company’s plans to expand into Russia and Belarus, Mei often ventures that his business is another pioneering piece of the motherland’s “Belt and Road” initiative—a tentative claim, at best.

Less palatable realities are generally not included in this vision. For centuries, human trafficking has been an internal issue, with daughters sold or kidnapped to service the nuptial needs of less populated rural regions. It’s hardly unique to China: “The farmer needs a wife” is practically an international folk song. In the last decade or so, the urgency of this need has led to many marriages between women from poorer Southeast Asian countries, such as Vietnam and Cambodia, and Chinese men who can’t find or afford a village bride. Some are consensual arrangements; others are evidently not, as there have been numerous cases of police breaking up trafficking gangs operating as “international matchmaking” services.

The idea of marriage and lineage is deeply ingrained in Chinese society, even as it is thwarted or complicated by matters such as gender and wealth inequality, skewered birth rates, and unrealistic societal pressures. Local bureaucracy is not helping: On birth certificates, parents are offered 56 options to register their child’s ethnicity with authorities; none include “mixed-race.”

Perhaps the biggest impediment to a more progressive view of international marriages is sexism. The “Belt and Road” matchmakers will no doubt flourish, but only “marrying foreign women is patriotic,” as an overseas Chinese student observed on Twitter. “Marrying foreign men is treasonous, because women are considered property of men in the patriarchy.”

One Belt, One Love is a story from our issue, “Modern Family.” To read the entire issue, become a subscriber and receive the full magazine. Alternatively, you can purchase the digital version from the App Store.