For a country that likes to emphasize “Chinese characteristics,” China’s national flag appears to be remarkably free of any—with no dragons, plum trees, or pandas in sight.

Instead, design of the famous “five-star flag” (五星旗) is rooted in communist ideology and old-fashioned political wrangling. When the defeated Kuomintang army retreated to the island of Taiwan, the “white sun, blue sky, and red earth” (青天白日滿地紅) flag of the Republic of China went with them.

To organize the newly inaugurated People’s Republic under a fresh national banner, the Chinese People’s Political Consultative Conference (CPPCC) advertised a competition for new designs in the July 15, 1949 edition of the People’s Daily.

By September, 38 remarkably similar designs had been approved out of more than 3,000 submissions, with the leading contender showing a large yellow star (symbolizing the “yellow race”) atop a horizontal yellow stripe, which represented both the Huang He (Yellow River), known as the Mother River of the Chinese People, and their unity under Communism, over a red background—a traditional Chinese color, symbol of Communism, and the blood of its revolutionary martyrs. 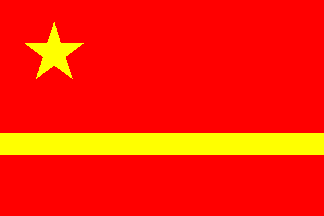 One of the original leading designs for the flag

But there was a hitch. A sizable minority of CPPCC members saw inauspicious meanings in the apparently innocuous yellow stripe: It showed “the red flag of revolution cut by the stripe,” illustrated the limits of the revolution, and evoked a sense of disunity.

An alternative design, by Wenzhou economics major Zeng Liansong, was deemed far less problematic: the design, based on the proverbial idea of “longing for the stars, longing for the moon,” again included a main yellow star (the Communist Party) half-encircled by four others, each representing the official classes of the Chinese people under the PRC:  gōng (工, workers), nóng (农, farmers), shì (市, intellectuals, or bourgeoise), and shāng (商, businessman, petty bourgeoisie).*

On September 27, 1949, the flag was formally approved by the CPPCC. When the design was published across China, Zeng did not at first believe it was his—the hammer and sickle design, which had its origin in the Russian Revolution as a symbol of the proletarian alliance, had been removed. Mao Zedong would rather his new country new flag be a display of independence, rather than deference to their Soviet allies.

A previous flag, devised during the brief Chinese Soviet Republic (中华苏维埃共和国, 1931-1937), had explicitly evoked the Sino-Soviet alliance. The Chinese Soviet had been an unrecognized mini-state mostly composed of the mountainous regions of Jiangxi and Fujian provinces controlled and led by Mao and Marshall Zhu De, and sponsored by China’s Leninist neighbour; after forming an uneasy “united front” with the Kuomingtang against the Japanese invaders, Mao agreed to formally dissolve the republic, but elements of its flag seems to have inspired some of Zeng’s design. The official flag of the unofficial Chinese Soviet Republic (1931-37)

According to reports in Chinese media, Zeng was only convinced that the design was really his when a missive was sent from the General Office of the People’s Government, bearing the words: “Mr. Zeng Liansong, your design of the national flag has already been adopted.” Zeng also received “CPPCC membership and 5 million yuan [500 new yuan, or RMB], in thanks for your contribution to our country.” Given that Mao’s official monthly salary was only 404.8 RMB, this was a rich reward indeed. Zeng was the subject of many articles following his death in 1999, aged 81

Today, while the flag has come to mean many things—from a simple reminder of home for overseas China, to an indicator of a product’s country of origin—the Party continues to treat it with extraordinary reverence and symbolism. It is raised daily in Tiananmen Square by an honor guard of 96 soldiers, representing 9.6 million square kilometers of Chinese territory, in exactly 2 minutes and 7 seconds, the same time the sun takes to rise over the Beijing horizon (consider that in Mao’s early years, this job was originally performed by two museum workers). It remains a potent symbol with meanings to many across the globe, whether or not Chinese.