Even in China, “Iron Man” is famous. There are now whole websites dedicated to the armored American industrialist-turned-warrior. But in another era, the title belonged to a homegrown hero—a brash, plain-spoken “model worker” and amateur poet named Wang Jinxi (王进喜).

“I would give up 20 years of my life, if it means China can produce oil in its own land,” Wang once famously declared. “I want to be a willing ox, working conscientiously for the Party and the people in my life.” It’s a fitting encapsulation of Wang’s career—and an apt description of the laodong mofan (劳动模范, “model worker”) or laomo (劳模), the honored yet precarious life of the folk idol in Maoist China.

Predating the People’s Republic itself, the Chinese Communist Party’s laomo program was based on Soviet Stakhanovite program. Whereas Stakhanovites were chosen for record-breaking productivity, and appeared in state media extolling the food and perks they received, the criteria for laomo reflected the Party’s grassroots beginnings.

Members who cut costs, recycled materials, and were loyal and selfless were the frontrunners for Model Worker status. Yet the work was itself the reward, and laomo who turned down material rewards were respected all the more.

It’s hard to separate hagiography from truth in the story of Wang’s life: Born to a poor peasant family in Yumen county, Gansu province, on October 8, 1923, Wang began begging at the age of 6, and was tending cattle for landlords by 10. At 15, Wang started working at the Yumen Oil Field, and later became one of the PRC’s first generation of oil workers.

In 1956, he joined the Communist Party, and his team was honored as the “Iron Drilling Team” two years later for setting a national record in monthly drilling depths. Wang’s real achievement, though, was arguably to live near a soon-to-be famous oil field in Heilongjiang, China’s north-easternmost province.

In September 1959, Wang was honored as a national laodong mofan, and  attended a conference with fellow model workers in Beijing. While wandering around the capital, so the story goes, Wang was ashamed to see public buses toting packets of coal on their roofs due to a lack of petroleum—at this point, the official record has it, the hardy driller from the Northwest “squat down on a street corner near Peking University, and cried.”

There was good news, though, later that year: A massive oil field had been discovered in a frozen swamp in an uninhabited part of Heilongjiang. At the time, almost all oil in China was imported—a “longstanding slavish dependence,” said Premier Zhou Enlai—and a recent rift with the Soviet Union was hitting the country’s supplies hard. Named Daqing (大庆, “Big Celebration”) in honor of the 10th anniversary of the PRC’s founding, the new field was central to Chairman Mao’s order for a “massive battle” to boost domestic production.” 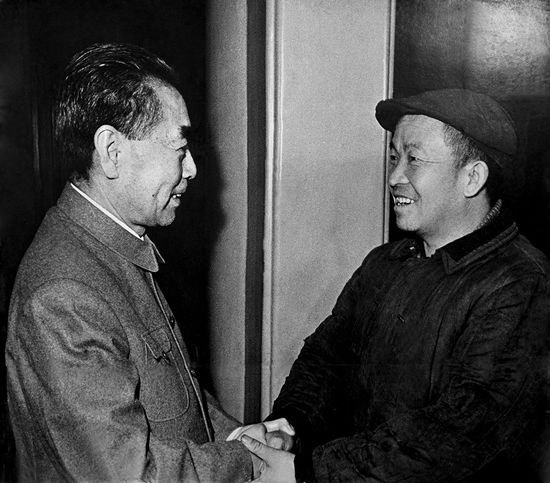 Wang was among the first volunteers for the arduous task. When Wang’s No. 1205 Team arrived in Daqing in March 1960, the temperature was below -40 degrees, and there was no plumbing; the team collected water by breaking ice. Their rig was erected without mechanical tools. In April, they were 700 meters into drilling a well when a blowout occurred. As the oil workers hurriedly threw cement into the pit, Wang, despite suffering a leg injury, tossed aside his crutches and plunged into the well to stir the mud with his body, inspiring the others to (literally) pitch in for a three-hour battle against the blowout—“Iron Man” was born.

Ironically, becoming a laomo was one of the few means for a worker to leave behind manual labor. After his Daqing assignment, Wang quickly rose through the ranks, first as director of drilling brigades and revolutionary committees, then reaching deputy chief of the CPC at Daqing. He attended the First Session of the Third National People’s Congress in 1964, visited Albania with the China Petroleum Delegation in 1966, and got extra rations along with his desk job and international travel.

Meanwhile, he had gained a cult following at home. At a 10,000-person rally for the Party’s birthday in 1960 in Daqing, Wang was a bona fide celebrity, arriving on horseback with red banners, flowers, and a color guard holding flags bearing his family name—much like how military generals were honored of old, a fact that would not serve him well during the Cultural Revolution.

By the 1960s, the famous photo of Wang in the mud was in Chinese textbooks, and his admirers kept faithful records of his visits with Chinese leaders: A total of 31 with Premier Zhou in his lifetime, and 13 with Chairman Mao, including a tete-a-tete on the Tian’anmen rostrum.

The former oil worker was encouraged to write poetry (an anthology of which has been published by the Daqing Wang Jinxi Memorial Museum), perhaps building on the narrative that he had learned to read and write from the Party’s literacy program for workers. Without formal education, Wang’s unpolished style and single-minded selection were exactly suited to the mythology of an ordinary worker achieving recognition through sheer effort and devotion to the Party.

“The drill bit runs to the earth/ Crude oil gushes to the ground/ Support the Vietnamese, drown the Yankees!” is indicative of one verse written during the war in Vietnam. Another was quoted by Chairman Mao, who told the American journalist Edgar Snow what China’s opponents should consider: “One of [Daqing’s] drilling workers said: ‘The oil worker lets out one mighty roar, and the earth shakes three times with fear.’”

Fame, though, could be dangerous in Wang’s day. While fellow cult hero Lei Feng, who died in 1962, was safely ensconced as a model of Mao Zedong Thought, the tides quickly turned against the living Iron Man during the Cultural Revolution. At a mass gathering  on December 23, 1966, “Gang of Four” member Zhang Chunqiao alleged that “Wang Jinxi’s performance had not been good…his change of status makes him influential. He is a beneficiary of his reputation, money, and status. What further revolutionary desire does he have?”

All around the country, former heroes were being forced to confess crimes. Beijing’s “Night Soil King” Shi Chuanxiang, a sanitation worker who once shook hands with Liu Shaoqi, was branded a “scab” and “fake laomo,” and eventually died after enduring over 100 “struggle sessions”—a fate similar to disgraced former president Liu himself. Iron Man was also brought to such sessions and tortured. According to The Soul of China, a 2007 book on the history of the Party, Wang was beaten, branded with a hot iron, and his head forced into a chimney flue full of gas make him to confess that, “The red flag of Daqing is black; Iron Man false.”

Remarkably, Wang refused, declaring, “It doesn’t matter whether I am an iron man or a clay man. No one can topple the red flag of Daqing. Whoever dares…let’s smash him into the earth with one fist.” Threatened at knifepoint to sign a confession, he shouted, “I can’t read well, but I know these words. Put the knife at my throat, and I still won’t make a single mark!” By this time, the country had all but descended into chaos, with factions of Red Guards leading raids on rivals and pitched battles being fought between troops and revolutionary youths. Wang was eventually rescued when Premier Zhou ordered the PLA to bring Daqing back under military control, but it would only be a short reprieve: Stomach cancer claimed his life in 1970.

It was a strange end for a laomo famous for his disdain of personal privilege, saying “I am a driller. When I work as a cadre I am still a driller. Position has changed, but the true quality of the working people cannot be changed.”

Rehabilitated, like many disgraced laomo and rusticated officials, after the Cultural Revolution, Wang was eventually named one of China’s Top 10 Figures of the 20th Century by Xinhua News Agency in 2000, along with Sun Yat-sen and Mao himself. Iron Man’s story has been resurrected several times by the Party, most recently in a 1990 TV series and a 2009 movie—all following major upheavals in the country’s political history.

The Party continues to name model workers today, though without the totalized propaganda drives as in Mao’s day—still, some have achieved media fame on their own steam. Post-1979 honorees include Yuan Longping, the “father of hybrid rice,” and Yang Liwei, the first Chinese in space. In 2005, the title was bestowed on Olympic hurdler Liu Xiang and NBA basketball star Yao Ming. The famous oil field even has a “New Iron Man,” scientist Wang Qimin, recognized in 1997 for his achievements as director of the Daqing Institute of Exploration and Development.

But such recognitions remain controversial. “[Athletes’] success and achievements owe not only to their effort, but…to the physical quality they are born with,” Zhou Xiaozheng, sociologist at Renmin University, opined to China Daily. “It is not easy for common people to follow their model.” To an increasingly well-educated, well-off public, though, laomo no longer needs to be synonymous with deprivation, struggle, and slavish devotion.

Indeed, a 2015 survey by Nanfang Daily found that laomo no longer holds much appeal to 95 percent of internet users. “Society’s evaluation of labor has evolved from ‘strength and sweat’ to intellectual, socially and economically profitable work,” the survey concluded. “Laomo in every decade reflect different ideological orientations.”

Chinese Idol is a story from our issue, “Modern Family.” To read the entire issue, become a subscriber and receive the full magazine. Alternatively, you can purchase the digital version from the App Store.

Chen Shaofeng is a contributing writer at The World of Chinese.