Forty years after reform, migrants are trying to define a “Shenzhen Dream” that binds the city together

Ji Yiran was just 23 when she set out to seek her fortune, leaving her native Huangshi, Hubei province, for Shenzhen in 2013. Her story is hardly unique: Less than 10 percent of Shenzhen’s population is native to the city, according to China’s last census.

Now working as head of her department at a media company, Ji attributes her success in part to Shenzhen itself: “Compared with other first-tier cities, I think Shenzhen is fairer and more inclusive,” she told TWOC. “Instead of their background, the city pays more attention to people’s capabilities. Anyone can find a fair chance here.”

Ji could be the poster child for the so-called “Shenzhen Dream.” Although less promulgated by the party-state than the Chinese Dream, Shenzhen’s version is both uniquely powerful and less defined, allowing Shenzheners to stamp their own vision on a city that continues to attract young people from across the country.

“There are a thousand Hamlets in a thousand people’s eyes,” noted Eric Zheng, director for the Information Center of China Development Institute, a Shenzhen-based think tank. “Everyone has their own unique ‘Shenzhen Dream.’ I don’t know how to define it. But it’s amazing to think about what sort of human miracle occurs when 20 million people, full of dreams and restless energy, gather together.”

“Shenzhen is a place where dreams can be realized,” Ji agreed wistfully. Others are more pragmatic. “[The Shenzhen Dream] means that you can live a valuable life here,” said Liu Yu, 38, who came to Shenzhen 11 years ago from Hunan province to work in the consulting industry. “You can achieve financial independence.” In 1978, when Chinese leader Deng Xiaoping pitched a special economic zone (SEZ) on the border of British-controlled Hong Kong, few imagined that the tranquil fishing villages of Bao’an county would become the gateway to a new export-driven economy. During the height of the so-called “Shenzhen migration tide” in the 1980s and 90s, an estimated 300,000 workers moved there each year, hoping to capitalize on a skyrocketing GDP of up to 25 percent a year. Seemingly overnight, the sleepy frontier town of 300,000 became a megalopolis of 20 million.

In the first decade of reform, work opportunities in Shenzhen were mostly in labor-intensive, low-end manufacturing. However, the city had a long-term plan to capitalize on the foreign direct investment (FDI) that was beginning to pour in, and offered preferential policies for cutting-edge industries. This elevated Shenzhen from the manufacturing hubs on the Pearl River Delta, such as Dongguan (the “World’s Shoe City”) and Foshan (“Furniture City”), and created the perfect environment for some of China’s most successful tech companies like Huawei, BYD, Tencent, and ZTE.

This development path, earning Shenzhen the moniker of China’s Silicon Valley, has ensured not only a steady stream of low-skilled workers, but also a highly skilled and well-educated workforce looking to pursue their own “Shenzhen Dream.” According to Eric Florence, director of the French Center for Research on Contemporary China in Hong Kong, divisions within this population were evident as early as the 1990s, when the government decided to promote a new, singular Shenzhen: “Norms of the Shenzhen Inhabitant,” introduced in 1994, provided vague guidelines on how migrants should interact with their host city, with key phrases like “love one’s country,” “build Shenzhen,” and “open up and create.”

This helped create a narrative that portrayed “outsiders” in a relatively positive light, Florence notes; a stark contrast to the situation in other Chinese cities. Instead of money-hungry leeches, Shenzhen’s new workers were envisioned as “builders” or “creators” who traveled to a backward village, seized opportunities, and transformed it into a technological oasis.

In part, this new “Shenzhener” identity was necessitated by the fact that most of the influx were from outside Guangdong province and spoke neither Cantonese nor the Hakka dialect. There was also the fact that Shenzhen was not built on a pre-existing city, unlike most other metropoles, and posed little resistance to assimilating the migrants—an “urban evolution process” that was “compressed…into only three decades,” wrote Hong Kong University architecture professor Juan Du in an essay on Medium.

Indeed, Shenzhen seems to have an identity unique from other Chinese cities, many of which have histories stretching back many millennia. Liu describes Shenzhen as “multicultural…contributing to an open and creative environment.” Ji echoes this, saying that migrants “have brought with them their local culture and contributed to making Shenzhen a more diverse and inclusive city.” Some of her friends have since started families, raising a second generation of Shenzheners. 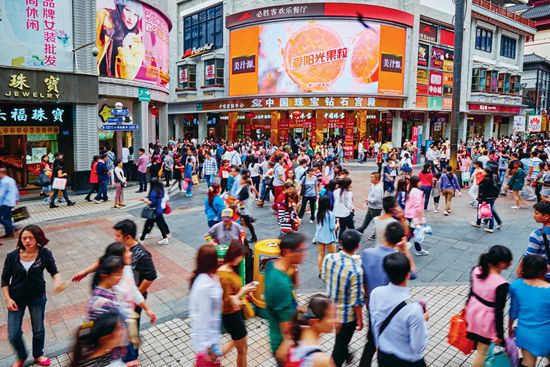 Jiefang Road, one of old Shenzhen’s only two streets, is a busy commercial area today (VCG)

Zheng contributes this inclusivity to favorable government policies. “There is a phrase, ‘When you come to Shenzhen, you become a Shenzhener,’” he explained to TWOC. “Most of China’s mega-cities, such as Beijing and Shanghai, have strict [household registration] restrictions. By contrast, Shenzhen is the mega-city with the least restrictions. This means that it is easier for migrants to become ‘local,’ as well as feel a sense of belonging.”

But there are limits to this inclusivity, sometimes imposed by the outsiders on themselves. “In Shenzhen, if you ask someone older than the age of 35 where they are from, they will always answer, ‘I am from Hubei’ or ‘I am from Jiangxi.’ It doesn’t matter if he or she has been living in Shenzhen for up to 20 years,” Liu noted.

Additionally, more attention is being placed on the needs of skilled workers, to the detriment of the low-skilled migrants now omnipresent in China’s cities. In her essay, Du notes that half of Shenzhen’s population is estimated to reside in dilapidated “urban villages” encircled by new developments, rather in the sparkling high-rises characteristic of the city.

And while there are well-publicized campaigns to formally register these workers as Shenzheners (such as a 2017 hukou scheme that did not place restrictions on education level), critics claim that the scope of these efforts is often too small, and likely won’t benefit the city’s most marginalized populations.

As the SEZ rushes headfirst in pursuit of its nebulous dream, it is still yet to be seen how the city will provide equal opportunities for all of its migrants, besides offering a capitalist haven in which everyone succeeds or fails on their own. Zheng, however, notes that the city is now formulating its own 2035 Vision Plan, “shifting the emphasis from economic development to human development.”

“We need to build a ‘people-friendly city,’” said Zheng, “which means that we need to create a good atmosphere for highly talented individuals, children, elderly, as well as foreigners.”

City of Dreams is a story from our issue, “Curiosities and Quests.” To read the entire issue, become a subscriber and receive the full magazine. Alternatively, you can purchase the digital version from the App Store.