China may have fallen in love with Peppa, but the pig still has a sorry reputation in idioms and proverbs

As the Spring Festival approaches, now is usually the time that TWOC trots out pleasant proverbs related to latest Chinese zodiac animal.

February 5 will mark the start of the Year of the Pig, and despite the viral popularity of Peppa Pig, the animal still has a rather negative reputation in Chinese pop culture. Terms that include the character “pig” (猪) are usually debasing in nature. Below are some pig-related phrases that we, as a moral and civilized publication, absolutely don’t endorse using in daily life.

Even though pigs are as smart as dogs, they still tend to be depicted as stupid, lazy, and dirty. The term “pig brain” is usually used to describe someone with one low intelligence or bad memory. For example:

What a pig brain, you can’t even remember this!

Never mind that pigs don’t have hands in real life: Originating from Cantonese, this term describes acts of sexual harassment, like subway groping. For example, if your (usually female) friend is sitting next to a suspicious character on the bus: 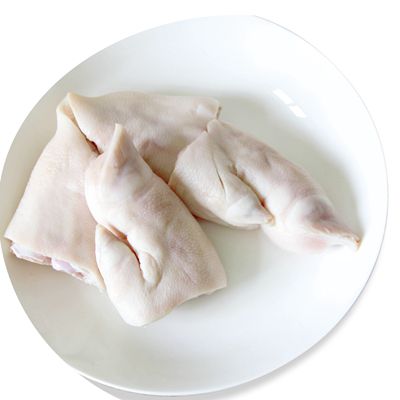 It seems that any part of a pig’s body can be used to curse someone. “Big pig foot,” an expression that went viral due to last summer’s hit period drama The Story of Yanxi Palace, can refer to any type of loathsome man, but especially those who are unfaithful, insensitive, or chauvinistic. Those labeled with this unfortunate description can take comfort in the fact that it was nominated as a Top Internet Slang of 2018 in the Chinese Pandian competition, and no less than Emperor Qianlong of the Qing dynasty (at least, as he is depicted in Yanxi Palace) is considered the epitome of trotter-ish behavior.

You haven’t called me for the whole week! You’re such a jerk!

猪油蒙了心 A heart covered in lard

A person completely without empathy or conscience is known as someone whose heart is drowned in pork fat.

I can’t believe you’d do this to someone who saved your life! Your heart must be covered in lard!

小白菜让猪拱了 The little white cabbage was dug up by a pig

An extremely sexist metaphor supposedly used by parents who are not satisfied with their daughter’s choice of spouse. Here, the cabbage refers to the girl, and the pig…well, you get the point.

How could the little white cabbage we have raised for so many years have been dug up by a pig?

猪狗不如 Worse than pigs or dogs

The current year’s zodiac animal, the dog, fares little better than its successor when it comes to how it’s viewed in popular culture. Even though this Spring Festival marks the transition between the Dog and Pig years, be very, very afraid if you hear the two animals being spoken of together, as in:

This murderer even kills babies. He’s worse than pigs and dogs!

All of a sudden, getting called a “society person” doesn’t sound so bad.