Ah, Spring Festival. Another year over; a new one rolls in—literally, in the case of anyone choosing to welcome the lunar year with a spring roll (春卷).

Despite their name, spring rolls are not a snack associated specifically with the season (unlike, for example, jiaozi, dumplings, or tangyuan, glutinous sweet rice balls), but this is partly because these culinary traditions reflect the dominance that northern Chinese culture enjoys over what the world considers Chinese New Year fare.

Down in the south, in places like Fujian’s Fuzhou, the spring roll is both a popular year-round snack and a Spring Festival staple. About the length of a middle finger, it’s made with a golden-brown wrapper and fillings dimly glimpsed beneath the semi-transparent skin. The dainty appearance is typical of southern delicacies (the American-Chinese version tends to have thicker, crispier skin). A perfect roll tastes of the combined crispiness of the deep-fried wrapper and the tender textures of its filling.

Nonetheless, spring rolls, also called “spring pancakes” (春饼) or “spring plates” (春盘), are descended from a traditional northern snack during the Jin dynasty. Today, spring plates, generally consisting of seasonal vegetables in pancakes, are eaten on the first day of the solar term Lichun (立春, “spring begins”) to pray for a good harvest year ahead. In comparison, the spring roll has a more versatile role.

In southern regions like Jiangsu and Zhejiang, the rolls are made with the year’s first batch of Chinese chives to welcome the spring. In other places, like Fuzhou, they are consumed on Spring Festival. Many Fujian folks have the dish before the Qingming (“Tomb Sweeping”) Festival, when the main ingredient, oysters, are considered at their yearly best. Down in Guangzhou, Guangdong province, the snack is a common breakfast choice. 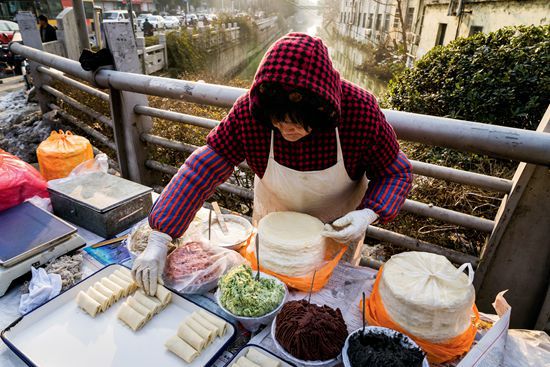 According to folklore, the spring roll dates back to the Song dynasty (960 – 1279), when a 30-year-old scholar was so engrossed in study for the imperial examination (which he had failed several times), he often forgot his meals. His concerned and supportive wife came up with a solution: a thin and semi-opaque wheat-flour pancake, wrapped around cooked vegetables and fried, which her husband could eat without putting down his books. Her efforts were well-rewarded—the man passed the exam that very year.

The earliest verified record of the spring roll or pancake emerges in Collections of Indispensable Household Items and Matters, a guide to running one’s courtyard during the Yuan dynasty (1206 – 1368). The recipe was remarkably complicated, demanding the use of sliced or chopped mutton, lotus root, walnut seeds, and several other nuts, “bruised” ginger, and scallions. Everything is seasoned with honey, icing sugar, and salt, wrapped up, and fried.

Fujian’s roll has a different origin story. In the waning days of the Ming dynasty, General Zheng Chenggong guarded what was left of the Ming’s territory against the Manchu army that would eventually install the Qing dynasty. Households grateful to General Zheng’s protection offered him a variety of dishes to eat. Unable to finish such a feast, yet unwilling to offend the kind locals, Zheng took a sample of each dish and wrapped them in a pancake to eat.

Despite General Zheng’s full stomach and fine manners, the Qing would eventually prevail. Yet the roll would become one of the “nine imperial snacks” in the 128 dishes that made up the “Manchu-Han Imperial Feast.” The Qing recipe collection Tiao Ding Ji recorded three different variations: with ham, chicken, or seasonal vegetables, rolled in a dough wrapper and fried; with minced bacon, scallion, black date, walnut seeds, and sugar, wrapped in a pancake, then cut into small chunks; and with mashed dried persimmon, and cooked bacon, also cut into small chunks.

Modern recipes vary, with more filling options. The biggest division lies in the salty-sweet contest defined by the different culinary palates in southern and northern China: vegetable, meat and seafood fillings in the south; white sugar or sweet bean paste in the north; and both flavors mingling in places like Shanghai. Many gourmands are astonished to discover the other region’s flavor for the first time.

When made inside the home, spring rolls can take any filling. Take the common “salty” recipe as an example: First, vegetables and pork are sliced; the meat is mixed with soy sauce and starch, and left to marinate for 10 minutes. The vegetables and meat are stir-fried separately, then mixed together, with water and starch, to create the filling. Once cooled, the filling is stuffed inside homemade or store-bought wrappers (commonly dough or tofu skins), and the roll is fried to a golden-brown hue.

The key to making an intact roll is to start folding in the filling from one corner, keeping space reserved on three other sides, then apply egg white to affix the last edge after wrapping. If done right, as the Qing poet Lin Lanchi once wrote, “it rolls the whole spring in (春到人间一卷之).”

Spring it on is a story from our issue, “Home Bound.” To read the entire issue, become a subscriber and receive the full magazine. Alternatively, you can purchase the digital version from the App Store.

From ancient times to now, Chinese have had their favorite locations to escape the summer sun Learn how to make the ‘Sweet Dew of the Willow Branch,' a delicious sweet summer treat