As Chinese cities compete to build the world’s next iconic opera house, here is TWOC’s Top 5

“Every city in China wants to be seen as modern and cultured, and an opera house is considered the best way to project that image,” The New York Times noted back in 1999,  accurately predicting the competition among provincial officials to build outlandish opera house over the next two decades. By 2013, there were an estimated 50 in first, second, and even third-tier cities, most constructed to international standards.

When the Shanghai Grand Theater opened in 1998, it was French designed, German constructed, and outfitted with a Japanese stage and American acoustics. But according to the Times, the majority of opera houses still lack “the administration, musical leadership, or human capital to take off,” such as a resident orchestra or troupe, and instead rely on touring performances. Here are some of the most creative attempts to be China’s answer to the Sydney Opera House: 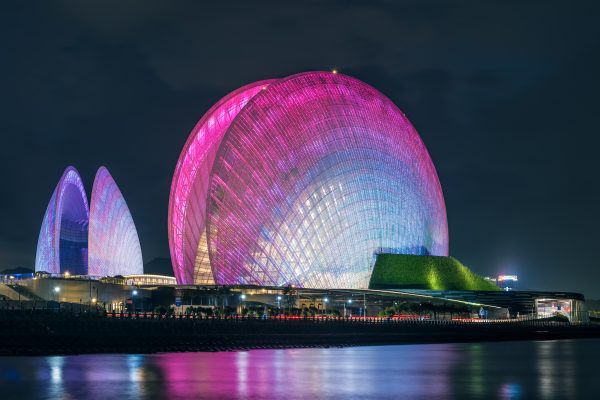 A balmy white by day, the Zhuhai Grand Theatre turns purple and pink at night. (VCG)

In the midst of the saga over Huawei CFO Meng Wanzhou came a video of children literally singing the praises of Huawei phones in front of two massive circular structures: Zhuhai’s Grand Theater. Built in the shape of the Asia Moon scallop shell, the seaside theater cost an estimated 1.7 billion RMB, is housed on reclaimed land, and lit with dynamic LED lighting at night. It is also seen as a vanity project that it is unlikely to be profitable, according to Macau Hub: “Zhuhai has a resident population of 1.57 million and only a small percentage of them will be able to afford the tickets.” Built by Beijing-based MAD architects with white aluminum panels, to resemble the snowy slopes that surround it in winter, CNN deemed the opera house a “force of nature” and ArchDaily named it the 2016 Building of the Year. Although advertised as an attraction for the city’s winter ice festival, TripAdvisor reviewers are skeptical of its viability. Not only does the theatre’s website still only advertise performances from 2017 and 2018, visitors say that the venue “is closed” with “no tours and no performances [going] on.” 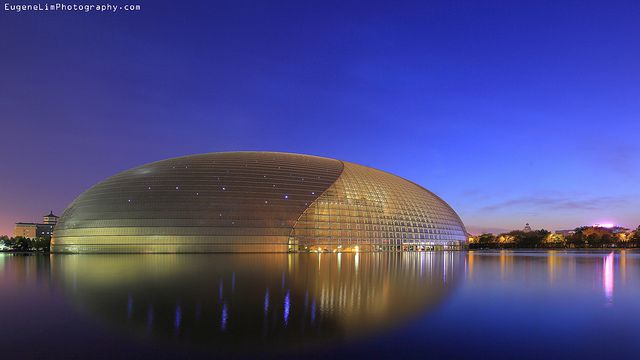 Aged 81, Jiang Zemin became the first performer of Beijing’s National Centre for Performing Arts (affectionately known as “The Egg”) when he burst into Western and Peking opera classics during a VIP tour before opening in late 2007.  Costing over 3.2 billion RMB, the over-budget Egg was mired in controversy. Its architect, France’s Paul Andreu, was also responsible for the collapsed futuristic terminal at Charles de Gaulle airport in Paris, leading Chinese leaders to worry about the structural integrity of the Egg. Some criticize its anachronistic structure (it is next to the Forbidden City and the Great Hall of the People), while others complain it resembles “a Chinese tomb.” The grayish-green walls of the theater brighten up the night sky. (Wikipedia / Oliver Ren)

Funded by the infamous Poly Group, the concept of Chongqing’s Grand Theater was originally “sails lost in a boundless sky.” However, some say that it looks more like a 19th-century ironclad ship or a spaceship, especially lit up at night in green and gray hues. With a 1.59 billion RMB price tag, the opera house is located where the Yangtze meets the Jialing River, making it a staple for the city’s riverboat tours. As AFAR notes, “Whether you think it’s ugly or amazing, it looks like the Grand Theater will become a central part of Chongqing’s identity.” 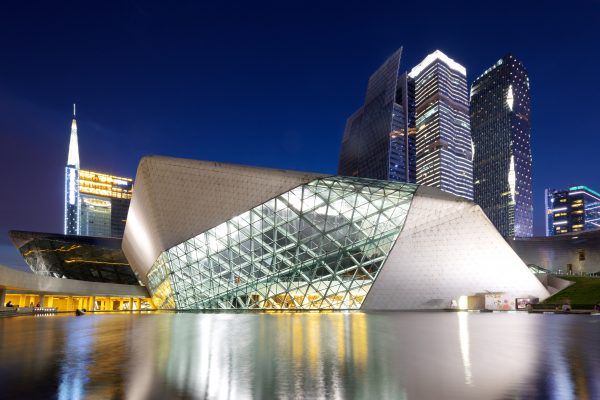 At one point, China had an obsession with architect Zaha Hadid, who designed Beijing’s new Daxing airport as well as a plethora of buildings by developer SOHO. But Hadid’s mainland fame began with her entry for a 2002 competition to design Guangzhou Opera House. Hadid wanted the “double pebble” to look like two rocks from the Pearl River, but the building was plagued by problems due to shoddy construction. According to The New York Times, by the time of opening, exterior stone panels were “already being replaced” and some plasterwork looked “as if it was done by an untrained worker who had never picked up a trowel before.”