Once considered a rogue offshoot of basketball, streetball enjoys a growing grassroots popularity in China

Sixteen-year-old Wu You was robotically flipping channels one evening when he saw it. It was the summer of 2001, and Wu was exhausted from a day of basketball practice, when his gaze landed on the Nike “Hip Hoop” commercial.

Wu recognized the faces of the famous basketball players, but not their moves; it was nothing like he had ever seen before. The way they spun the ball off the tips of their fingers, passed it behind their backs; how they dribbled it between their legs, all to the rhythmic squeak of sneakers and the drumbeat of the ball against the court—it was magic in the teenager’s eyes.

Since he was unable to record the clip, Wu spent that summer glued to the screen. Every day at 6 p.m., he meticulously studied the moves as they flashed by in the two-minute advert—memorizing three seconds each day.

Today, Wu’s name is synonymous with street basketball, known as “streetball” or jieqiu (街球) in Chinese. For the past 15 years, the Beijing native has organized tournaments around the country that deliberately eschew the format of professional or “association basketball”: short, snappy games; no over-priced tickets; and a revolving door of players, many selected from the rowdy spectators who often crowd inside the court’s foul lines during the game.

“During the early 2000s, many Chinese players and coaches misinterpreted streetball,” Wu tells TWOC. “They’d profile me as a showboat with no fundamentals.” 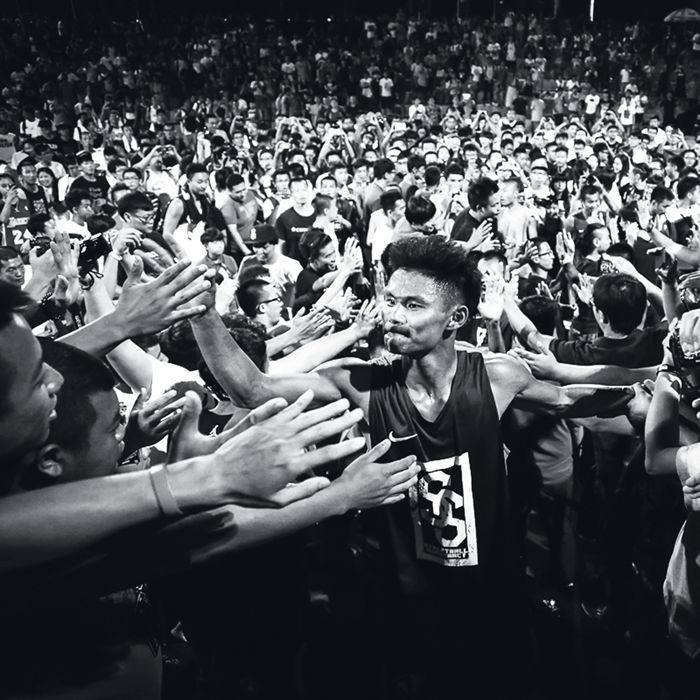 Wherever Wu You goes, fans come up to him for a picture or autograph—even in neighboring countries like Vietnam

Streetball, thought to have been invented in New York’s African-American neighborhoods in the 1970s, is an urban variant of basketball. It is typically played on outdoor courts with an entertainment focus and fewer formal rules. In the early 2000s, it was the nexus of its own culture war in the US, as the NBA tried to curb the spread of hip hop culture among players.

Fans of the sport, though, wholeheartedly embraced streetball’s rebel animus. Even as a student, Wu was soon sporting Allen Iverson-style cornrows that clashed with his uniform, and baggy clothes on the courts.

He even adopted a name for this new persona: MoreFree, a play on the title of Wu’s favorite song, Michael Jackson’s “Morphine,” and the freedom that Wu believes his sport represents. This goes beyond just a raucous disregard for tradition. While most pro ballers are taller and stronger than the average Chinese, streetballers make up for their physical shortcomings with skill and grit.

Fans appreciate their relatability. At under 5-foot-7, Wu is the shortest Chinese basketball celebrity ever, yet throws thunderous dunks with theatrical charisma, which he says was the result of childhood insecurity over his stature. Fellow player Zhao Qiang, who has 245,000 followers on Weibo (where he’s known as “ISO”), is famous for a stick-thin physique that allows him to dodge opponents with quick dribbling, while Yan Shuai (“Yeser”) has won over 211,000 Weibo followers with his Mohawk, broad body, and stereotypically “northeastern” hot temper.

Wu organized his first tournament in 2008, when China’s nascent streetball movement was in danger of premature extinction: The Beijing Olympics had drawn Nike sponsorships away from amateur tournaments towards Olympic athletes, and Chinese fans would rather watch NBA legend Yao Ming lead their country to victory against European powerhouses than cheer at undersized amateurs. Moreover, for this first generation of streetballers, all in their early 20s, love of the sport often had to take a backseat to the pressure of finding a stable job.

Wu decided that radical measures were needed to revive the grassroots movement, and gambled on making his tournament the biggest in China. Without a single sponsor, he emptied his savings account—around 6,000 RMB, earned through TV appearances—and spent two weeks, running around Beijing with his friends, sticking hundreds of posters on outdoor courts, and spamming internet forums. 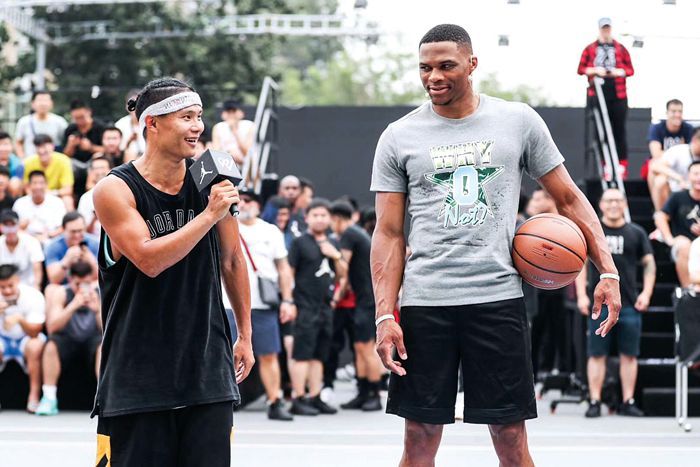 But his struggles weren’t over: Two days before the June 21 tournament, hailstorms descended on the city, making cancellation likely as the organizers couldn’t afford to rent an indoor court. “By the evening of the 20th, it was still hailing and I went to bed praying that a higher power would come to my aid,” recalls the now 33-year-old Wu. “The next day, I opened the curtains to glorious sunlight. I broke down in tears of joy.”

From then on, everything fell into place. Thousands of spectators flocked to see the tournament, and the organizers sent a tape to Nike, who were so impressed they offered to cover all the costs the following year. More recently, social media has allowed streetballers to make a living as “influencers”: Live streaming, ads, and sponsorships from clothing brands are all sources of revenue for Zhao, Yan, and Han Chao (“HC”), who has 418,000 Weibo followers, as well as Wu himself, whose following is well over 1.7 million.

These days, the highlight of the streetball season is indisputably Wu’s “Sunset Dongdan” tournaments, held in Beijing’s Dongdan Courts between May and June, often attracting NBA stars curious to experience China’s basketball culture. Off-season, Wu’s team takes streetball to dozens of other cities, leading to a proliferation of crews and intercity matches. Thousands of amateurs try out each year.

In 2018, Yao Ming, now president of the Chinese Basketball Association, invited Wu to the annual association meeting—for a nominal contribution, granted, but the gesture counts.

Even TV producers have jumped on the bandwagon, grafting budding streetball talents into a reality show called Dunk of China, which quickly gained a record number of subscribers on Youku.com after premiering in September 2018. Using a formula borrowed from televised singing contests, such as The Rap of China, the show pits amateur ballers against each other under the guidance of four celebrity judges: music idol Jay Chou, actor Li Yifeng, and basketball stars Jeremy Lin and Guo Ailun. Seemingly, the only name absent from this accomplished line-up was MoreFree himself.

Instead, while the show was filming its first season, Wu was battling taller and stronger competition on the Dyckman, a New York court with legendary status in the streetball world. Over the past few years, Wu, Zhao, HC, and other streetballers have led teams to play in Paris, LA, New York, and other global hubs, hoping to seek new challenges and raise the bar for Chinese streetball. These efforts paid off: On September 22, Wu was signed by the Zhuhai Warriors of the Asian Basketball League, becoming China’s first ever streetballer-turned-pro.

“Fans follow many documentaries made about us, but no one sees what goes on after the cameras go off…I’m still on the court, working on my craft,” Wu explains, then adds, with characteristic cockiness, “I think I’m better than everyone on Dunk of China—why waste time filming that show, when I can go to New York, and lose by 30 against Americans?”

Hoops and Dreams is a story from our issue, “China Chic.” To read the entire issue, become a subscriber and receive the full magazine. Alternatively, you can purchase the digital version from the App Store.