We are on a road that has never been trod, and destined to be lonely, destined not to be understood for the time being,” declares Jiang Yang, chairman of Shanghai’s newly inaugurated China Securities Museum.

In this role, Jiang is refashioning the 30-year history of China’s stock market, looking past the speculations of financial reporters and the fortunes of millions of investors toward a narrative of poetic destiny.

The museum venue, the former Astor House (or Pujiang Hotel), still carries traces of its original ritzy purpose. In one room, the furniture has been replaced by black leather chairs, but there remains a faded yellow plastic door hanger for requesting room service in Chinese, English, and Japanese, as well as a private bathroom.

Located in the former French Concession district, the Astor, which was officially closed to guests on January 1, 2018, has hosted illustrious figures such as US Presidents Ulysses S. Grant and William Taft, Bertrand Russell, Charlie Chaplin, and Albert Einstein. It was home to Shanghai’s first electric lamp and telephone, and the venue of Qing dynasty Empress Dowager Cixi’s luxurious 60th birthday party in 1897. It also became the hiding place of later PRC Premier Zhou Enlai during the 1927 massacre of communists.

During the 1920s, the Shanghai Security Goods Exchange found a temporary home at the Astor. Although the hotel later fell into a disrepair—one 1992 China File article noted it was “distinguished only by its sooty exterior, grimy windows and gloomy interior decor of dark wood paneling and peeling plaster”—its first-floor Peacock Hall was chosen to become the locale of the Shanghai Stock Exchange, China’s first computerized exchange, in 1990.

Only seven listings were offered on the first day of trading, yet the market grew so quickly that the Astor’s ballroom could no longer accommodate it. By 1997, the Shanghai Stock Exchange had moved to a new building in Pudong around Century Park, surrounded by farmland. However, the Astor, at least according to Jiang, remained the “spiritual home” of the exchange despite its Baroque architecture and colonial history. Today, exhibitions at the appointment-only museum are spaced out over several floors of its former ballrooms and restaurants, which have been immaculately refurbished—and are almost more absorbing than the displays. 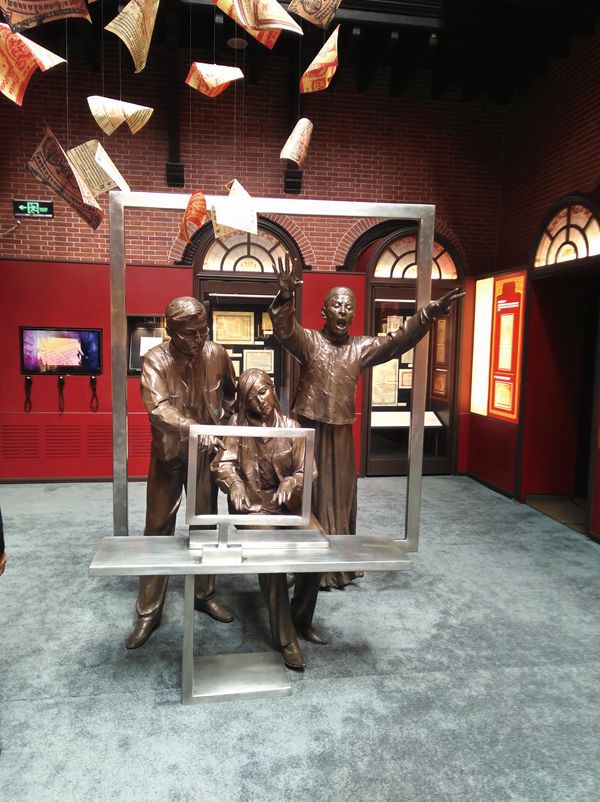 In one exhibit, placards about stock exchanges in the “Belt and Road” countries are set among intricately patterned wood floors, original chandeliers, and wall murals of Victorian-era balls. An old restaurant’s dark wood panels frame the display of historic securities—from 19th century Qing bonds to local government stocks during the early years of the PRC (contrary to popular belief, stocks were issued between 1949 and 1957).

The Peacock Hall is, without a doubt, the crowning feature, with stocks-related artifacts, photos, and dioramas recreating scenes from the trading floor throughout the market’s brief history. Jiang notes that the stock market’s digitalization represented a unique challenge to curation. “There are few physical objects [associated with the stock market], but a lot of electronic data. It is not easy to find a way to present them,” he tells TWOC, explaining that he is in the process of collecting oral histories for major events in the history of Chinese stock trading.

One source is Gao Zhikai, now vice president of Beijing-based think tank the Center for China and Globalization, who interpreted the fateful meeting between paramount leader Deng Xiaoping and New York Stock Exchange (NYSE) chairman John Phelan in 1986, an event long believed to be the foundation for China’s first stock market.

Gao remembers the meeting as something monumental: “Two or three dozens Americans were stuffed inside the Fujian Room in the Great Hall of the People…You know how Wall Street guys are; they were tall, burly, and quite loud. But everyone was quite cheerful and excited.”

However, few were prepared for what happened next. Most attendees believed the meeting was a mere formality, the finale of a cooperative visit to the People’s Bank of China, Gao claims, “No one expected Deng to say that he wanted China to develop its own stock market.”

The creation of capital markets represented a huge change to China’s financial ecosystem. “At the time, there were few insurance options and even fewer stocks and securities, let alone an exchange for them,” Gao tells TWOC.

To prepare for the meeting, Gao had holed up in his room for two days, devouring every book on financial markets he could find in the Ministry of Foreign Affairs’ library, trying to understand the underlying financial principles deeply enough to translate them from one language into another. “I had to grapple with alien terms and alien concepts like ‘stock,’” he laughs. “How could a stock be traded? Why would a stock sometimes go up and sometimes go down?”

Jiang also grew up without a finance background. “In elementary and high school, I was taught that I should rather die of hunger than accept anything capitalist,” Jiang comments, noting that his generation did not even know about stock and bonds until they attended university. After working as a financial reporter, he went on to become vice chairman of the China Securities Regulatory Commission (CSRC), the authority tasked with the (at times conflicting) duties of supervising and creating capital markets.

Jiang recognizes that this development has been sometimes tortuous, with fierce infighting and opposition among multiple quarters in its brief history. In the early years, some provinces would allow under-qualified enterprises to be listed simply to fill their quotas. During the 2008 global financial crisis, there were several newly-listed Chinese enterprises which did not fully understand the risks of working with international investment banks, and incurred enormous losses, requiring the CSRC to step in and defuse the situation.

Nevertheless, “China is the very first socialist country in the world to develop its own capital market and stock exchanges,” Jiang boasts. “If we had relied solely on the banking industry for financing [the 4,000 companies listed on China’s stock exchanges], we would have faced a major challenge in our economic development.”

But the benefits exceed economic development, according to Gao, who notes that cooperation in finance increasingly became the diplomatic cornerstone in US-China relations. After obtaining his J.D. from Yale University, Gao spent over a decade in investment banking.

Only 11 years after interpreting the Deng-Phelan meeting, Gao was ringing the opening trading bell at the NYSE in 1997 for the initial public offering of Morgan Stanley and China Construction Bank joint-venture. “It’s true that China’s capital markets have benefitted from America’s help, but so many Chinese companies have gone to America to list their companies. This cooperation has made both countries wealthier.”

Taking Stock is a story from our issue, “Funny Business.” To read the entire issue, become a subscriber and receive the full magazine. Alternatively, you can purchase the digital version from the App Store.

China’s first stock market and how it went belly up