The Miscellany of Youyang is a Tang dynasty book well-known for its records of weird and uncanny tales of the supernatural. Read Part 1 of our translations from this spooky work here. 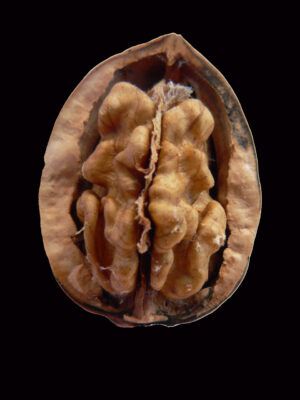 Once upon a time, a scholar from Weinan [present-day Shaanxi] suddenly died in Chang’an. His wife, surnamed Liu, still lived at home. One summer’s night, their son felt too anxious to sleep. At the third watch, he suddenly saw an old man who wore white robes and had two teeth that stuck out of his mouth, watching him. After a while, the man approached the bed, before which a maid was soundly sleeping. Grabbing her by the neck and tearing up her clothes, the man devoured her noisily until her bones showed, and then removed and swallowed her organs. Seeing the old man  open his mouth as wide as a dustpan, the boy screamed. At the moment, the man vanished, and there was nothing there but the bones of the maid.

Nothing happened for a few months. On the first anniversary of her husband’s death, at sunset, Liu sat in the yard cooling herself, when a wasp began buzzing around her face. Liu slapped it to the ground with her fan, and discovered it was a walnut. As Liu turned it over in her hands, it grew to the size of a fist, then a bowl, and then a plate, as Liu watched in fright. Suddenly, it grew two wings and began to circle in the air, making sounds like a swarm of bees. It smashed itself against Liu’s head, which split open, spattering the tree nearby with her teeth. As the creature has disappeared, nobody knows what kind of demon it was.

Night of the Zombies

When the hermit Zheng Bin was visiting Hebei, the chief of the village where he was staying lost his wife, but she wasn’t yet entombed. One day at sunset, her children, who were guarding her body, heard the sound of music filtering into the courtyard. When they looked again at their mother, they saw her move. By this time, the music had reached the room. The corpse got up from the bed and began to dance.

As the music passed out of the room, the corpse fell down. But quickly, it jumped up again, and followed the music out the door. The family was terrified. It was already dark; nobody wanted to go out and search. At the first watch, the village chief returned home. On hearing what happened, he caught up a mulberry branch as thick as an arm, gulped down some wine, cursing, and rushed out to search. Walking five or six li into the wooded cemetery, he heard the sound of music again in a copse of trees. Approaching, he saw a blazing fire, and the corpse dancing beside it. The village chief raised his stick, and the corpse fell down. The sound of music ceased, and he carried the corpse home on his back.

A Bite in the Night 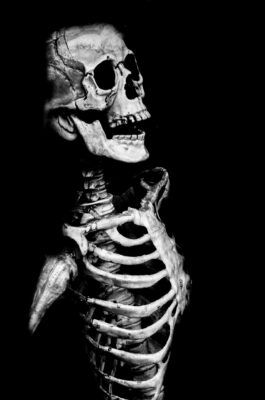 A medical monk once told this story: in Fuzhou, there once was an eminent monk named the Reverend Hongji who lived frugally. One day, he picked up a human skull in the riverbank, and brought it back to his temple in his laundry basket [editor’s note: in ancient times, bones could sometimes be used as bedside candle-holders]. One night, as he lay sleeping, the Reverend felt there was something biting his ear, and swatted it away with his hand. There was the sound of something shattering, and he suspected it was the skull. In the morning, the skull was indeed found smashed into six pieces under his bed.

The Reverend put all the pieces in the tile ditch [a sluice for draining water between the roof tiles]. That night, balls of flame the size of chicken eggs appeared one after the other under the tiles. Lighting a candle, the Reverend scolded, “In life, you did not do enough good deeds; thus, in death, you cannot ascend to heaven. As a skull, what more mischief do you wish to do?” After that, the strange occurrences ceased.