As China faces a looming crisis in pork supply, a Guangxi farmer named Pang Cong has come up with a headline-grabbing solution: breeding gigantic pigs that tip the scale at 500 kilograms, comparable to the size of polar bears.

Breeding bigger, though, is not necessary better. Alongside supersized animals, a growing market for meat substitutes in China may point to a healthier and more environmentally friendly path to food security.

Fake meat is not new to the Chinese palate; tofu and seitan have been substituted for animal proteins in Chinese dishes for centuries. The country’s longstanding vegetarian traditions largely stem from the Buddhist reverence for the lives of animals. Historically, eating meat was also a symbol of wealth and a luxury that few Chinese could afford until recently. 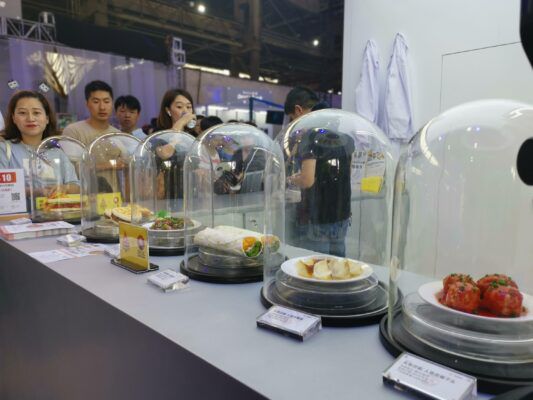 Artificial meatballs, tacos, and other meat products at the 2018 Taobao Creation Festival in Hangzhou

Meat has become more available to the masses due to China’s rapid economic development. At present, meat consumption is at an all-time high—in 2018, China consumed 46 percent of the world’s pork. Concerned about the health and environmental risks related to overindulgence in animal products, China’s Ministry of Health released a nationwide plan in 2016 to reduce meat consumption by 50 percent.

In a 2017 study by the New Zealand Institute for Plant and Food Research, 39 percent of Chinese consumers were making conscious efforts to reduce their meat intake with vegetable and meat substitutes; 63.5 percent cited health reasons and 40 percent cited environmental reasons as their motivation to cut down.

Technology is also advancing rapidly to create hyper-realistic meat substitutes. Over this year’s Mid-Autumn Festival, Beijing-based startup Zhenrou sold over 3,000 orders of substitute meat-filled mooncakes on Taobao. Its millennial founder Lu Zhongming, who was inspired by the infamous “Freshman 15” that his peers gain due to unhealthy lifestyles, promotes a recipe using wheat powder and pea protein to closely replicate the taste of pork. When Zhenrou’s products were pitted against pork-filled mooncakes in a taste test in Shanghai, many participants allegedly couldn’t tell the difference between the two.

The meat-free diet has become an economic incentive as well. The African Swine Fever epidemic has cut China’s pork supply by at least 21 percent, and pork prices are rising. Demand for animal meats remain high, and plant-based protein could be the more sustainable and affordable answer to a scarce supply. 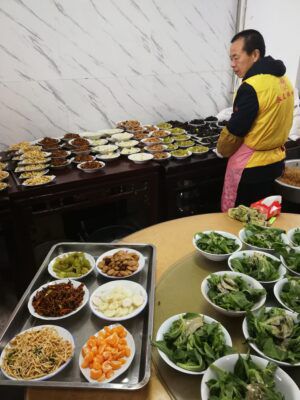 Despite all the benefits it brings to the table, though, fake meat still has its critics. Tang Li, founder of the Chinese Vegetarian Association, advocates a plant-eating diet for ethical reasons and doubts the appeal of mock meat. “I think for true vegetarians, fake meat won’t be really attractive. It is just like when children want the moon, and their parents give them a small mirror…to satisfy them,” Tang tells TWOC. A true vegetarian, he believes, adopts the diet “out of consciousness, out of great love, to quit eating other living things.”

Long-time vegetarian Xing Lihong, though, enjoys eating fake meat on occasion. “Since I know it’s not real [meat], I don’t feel guilty,” she says. “I gave up meat for health reasons and over concern for the quality of today’s meat, like whether there are antibiotics or hormones. If fake meat can avoid all these and use good materials, I think it’s good to cook with and satisfy our appetite.”

While awareness and consumption of artificial meat has increased, the movement remains confined to niche communities and cities. China has strong cultural ties to meat—the character for home, 家, depicts a roof over a pig, after all—and animal protein has become an integral part of people’s diets. Converting an increasingly carnivorous population to a plant-based diet is a mammoth undertaking on culinary as well as cultural lines—but alternative meat-makers seem ready to sink their teeth into the project.