Donkey meat may not be a regular option at deli counters in Western countries, but in China, it’s food fit for the gods, at least if one folk saying is to be believed: “In heaven, there is dragon meat; on earth, there is donkey meat” (天上龙肉，地上驴肉).

This is high praise for the humble animal often associated with farm labor. Though the origin of donkey consumption is contested, records of people eating the meat in China date back to the Ming dynasty. According to Howie Southworth and Greg Matza in Chinese Street Food: Small Bites, Classic Recipes and Harrowing Tales Across the Middle Kingdom, in the 15th century, famished soldiers and villagers began eating their horses during a food shortage caused by a rebellion led by Prince Zhu Di against Emperor Zhu Yunwen. But because horses were deemed valuable for warfare, the less-prized donkeys gradually came to be eaten as substitutes.

Although not as common as pork, beef, and chicken, donkey meat isn’t too difficult to find, particularly in northern provinces such as Hebei, Henan, and Shandong. Donkey can be eaten stir-fried or in a variety of dishes, including donkey entrails soup (驴杂汤,  lǘzá tāng), donkey hot pot (驴杂锅仔,  lǘzá guōzǎi), donkey intestine (板肠，bǎn cháng), and the most popular, donkey burger (驴肉火烧, lǘròu huǒshāo).

The donkey huoshao typically consists of braised donkey meat and green peppers placed within a crispy bun. Gelatin from the animal’s hooves is also added to enrich the mixture. The origin of the burger is disputed, as the Hebei cities of Baoding and Hejian both lay claim. The Baoding version of the burger is circular, while in Hejian a rectangular bun is used. In 2017, Hejian appeared to have won the debate when the China Hotel Association declared it the official home of the huoshao. Each year, the town hosts a donkey burger festival to celebrate. Donkey meat is known as a high-protein alternative to pork and beef, rich in omega-3 fatty acids, and is considered a blood and kidney supplement in traditional Chinese medicine. First-time eaters find the taste to be tender and rich. “I honestly thought I was eating pork or beef tendons that were slow roasted in a crockpot,” says Liang, a Chinese-American student who had her first donkey burger at her campus dining hall in Beijing without knowing what type of meat it was.

But the consumption of donkey does not come without controversy—China’s demand for the animal has caused a worldwide donkey shortage. The popular ejiao (阿胶) traditional Chinese medicine is a gelatin created from donkey hide and is believed to cure all manner of ailments, from baldness to aging to menstrual pain. Demand for the medicine has soared in recent years. Along with the desire for donkey meat and the diminishing number of families raising donkeys for farm work, this has seen China’s donkey population plummet.

Donkey populations in parts of Africa have also begun to struggle as the animals begin to be exported to satisfy Chinese demand. There have even been instances of donkeys being stolen from farmers in Kenya to be sold to China. 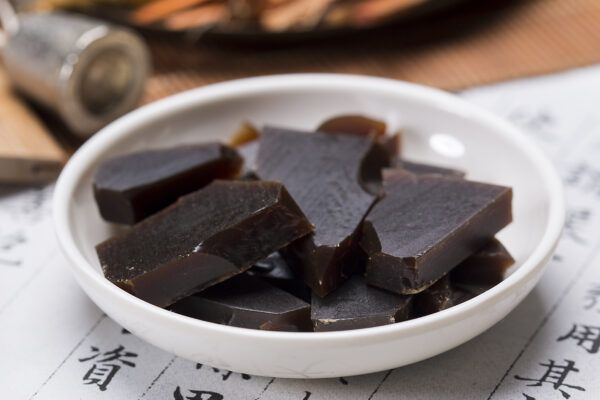 According to Traditional Chinese Medicine, donkey hide gelatin can cure a number of illnesses

But with pork prices soaring more Chinese restaurants and consumers are turning to alternative meat sources, potentially driving even more demand for donkey meat. For consumers like middle school teacher Hong Li, taste is still the biggest attraction: “I don’t see it much at the market…so I don’t eat it very often, but it is very delicious.”

Not everyone can stomach the meat, though: Li’s 17-year-old daughter, Lucy, refuses to touch it. “I like little animals,” she says, “so I probably won’t try it.”

Liang, though, was converted after her first bite of  huoshao, and still wanted to have it again after learning the truth of its contents. “I actually went back the next day to get another one because it was so good,” she says.

“Try everything once,” she implores TWOC.