Ten years ago, a skinny Chinese-Canadian teenager arrived at the Vancouver stop of Global Auditions, a televised talent-search organized by South Korea’s SM Entertainment, and earned himself a spot in one of Korean pop’s most successful boy bands to date.

Kris Wu may have since abandoned EXO and its kitschy music to pursue his passion for rap in China, but his story is still a model to thousands of young Chinese hoping to make a career in the global cultural phenomenon that is K-pop.

Li Yachu, a 17-year-old from Taiwan, is one of them. Two years ago, on her first visit to Seoul, Li and her friends stumbled upon a photo shoot for finalists on Idol School, another reality show in which aspiring K-pop artists compete for a spot in a nine-girl group.

When a smiling producer from the shoot approached her, saying something in Korean she didn’t understand, Li concluded that she was being scouted for the show’s next season, and became one of thousands of teens trying their luck at auditions held throughout the year in Chinese cities by Korean production companies seeking the genre’s next stars.

“It wasn’t just that one man—many other Korean chingu tell me that I look like an idol,” Li claims, using the Korean word for “friend.” The high-school student began taking language classes after returning to Taiwan, and now frequently intersperses Korean words in her Mandarin. K-pop group (G)I-DLE, which debuted in 2018, included one member from Beijing and one from Taiwan

Chinese fans are drawn to K-pop’s tight choreography and its stars’ powerful personalities, as well as the presence of their own compatriots in some of the genre’s most successful groups. Heilongjiang-born actor and singer Han Geng, who debuted as part of Korean boy band Super Junior in 2005, is credited as the first mainland entertainer to get their start in Korea. Others who followed—including Wu, and his fellow EXO graduates Lu Han and Zhang Yixing—have shot to super-stardom after returning to further their careers in China.

The industry’s unique “trainee” system adds to its appeal: Getting accepted into a K-pop academy affiliated with a company like SM Entertainment is a guaranteed fast-track to a singing career, though not always as superlative as that of Wu or Lu. Some companies invest as much as five years into preparing a K-pop group for its debut, and sign contracts for as long as ten years.

So far, most of Li’s efforts have ended in swift rejection. “When we did the group choreography, the studio mirrors didn’t lie,” Li admits after one audition. “I was the only one who didn’t have the sexy, girly style that entertainment companies look for in trainees.”

Fortunately for hopefuls like Li, the K-pop industry has been responding to rising interest from China, and opportunities have consequently risen. As early as 2008, SM Entertainment looked to maximize Super Junior’s Chinese fanbase by creating a sub-group, Super Junior-M, based in China and singing mainly in Chinese, a tactic that EXO would mimic a few years later.

Some Chinese companies have even started to make inroads into the ultra-competitive South Korean market. Yuehua Entertainment, Han’s manager, and one of China’s first K-pop agencies, opened its first office in Seoul’s central Gangnam district in 2014, and already co-manages award-winning acts such as Chinese-Korean girl group Cosmic Girls. 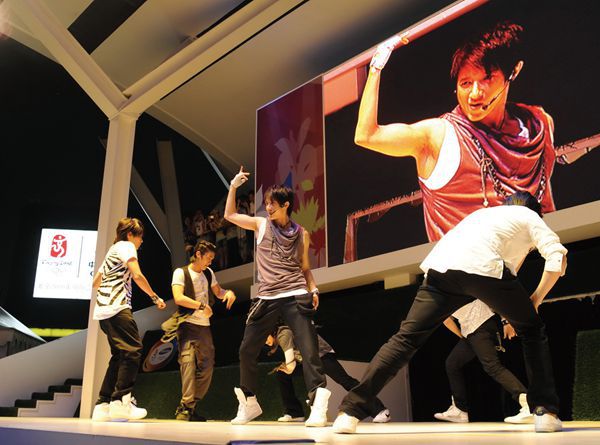 Conversely, some Korean agencies are now running their own operations in China, capitalizing on the lack of homegrown expertise. “You need a bunch of people to produce a K-pop star, from makeup artists to producers,” explains 55-year old Kim Gyeong-sik, founder and CEO of entertainment startup W-1. “The issue is China does not yet have these kinds of professionals working behind the scenes, especially when it comes to music videos, so we have to bring them over from South Korea.”

W-1 has yet to produce a star, but the resources Kim has poured into his academy are drawing droves of hopeful students to Beijing’s “Koreatown,” Wangjing, where the company is headquartered.

“I was at a Chinese company before, but the training was too lax,” says 21-year old Jiang Moxi, one of around 100 part-time and full-time trainees, at the academy. “W-1 takes everything seriously, they are excellent in every aspect,” she adds in the presence of a W-1 supervisor.

TWOC was not allowed to sit in on a rehearsal, but according to Jiang, they take place daily, and cover the four basic skills required from any trainee: dancing, singing, acting, and Korean language. Full-time trainees spend a minimum of two hours practicing every skill. Free time is allowed, but most of it is spent in the gym.

Jiang, unlike Li, was no fan-girl before turning towards K-pop. Rather, she believes that K-pop is the most likely avenue for achieving a childhood dream: to live off her passion for dancing and singing. “There are more than enough entertainment agencies in Beijing and Shanghai for any driven Chinese looking to pursue K-pop,” she believes.

Away from her W-1 handler, though, the Shaanxi native opened up about some of the struggles she has faced in her K-pop journey.

“My parents called me back home after I announced my plan of joining W-1 full-time after graduation,” says Jiang, who is currently a final-year law undergraduate at the China University of Political Science and Law. “They told me I shouldn’t let a hobby wreck my future. We argued a lot.”

Jiang’s enthusiasm belies some of the perils her career path holds: Both Han and Wu left their respective groups after growing tired of having their public image strictly managed by SM, which forbade them from building solo careers in China. Jiang has been considering plastic surgery to increase her standing within the company’s trainee hierarchy, which defines who will represent W-1 in talk shows, competitions, and eventually a debut girl group.

Trainees’ value also diminishes with age—Li believes this was what cost her at another of her auditions, where the majority of those selected were 15 or under. When Korean entertainment titan JYP debuted its first all-Chinese boy band, Boy Story, a few months later, its members were all between 11 and 14, perhaps inspiring their first single “How Old R U.”

W-1 trainees are also contractually obliged to re-audition every year against new contenders, and the company reserves the right to kick out any trainees over 25 deemed to be “underperforming.”

Jiang insists that she isn’t fazed by either the gruelling training process or the uncertainty of her career. “I don’t think about these things,” Jiang says. “I’m very stubborn and prefer to be positive rather than pessimistic.” Her W-1 supervisor was back in the room, staring at her intently.

Seoul Train is a story from our issue, “Funny Business.” To read the entire issue, become a subscriber and receive the full magazine. Alternatively, you can purchase the digital version from the App Store.