In the spring of 1868, as the snow melted on the rugged peaks of the Sierra Nevada, local newspapers reported a chilling sight: the emergence of the frozen bodies of Chinese railroad workers, some with tools still in their hands.

This was not unusual. The winter prior, as temperatures hit 0 degrees Fahrenheit and winds swept 100 miles per hour, a workforce of up to 20,000 Chinese continued to blast tunnels and pound in the tracks of America’s first transcontinental railroad; sometimes, entire teams were swept away by avalanche.

In all, 90 percent of the 1,912-mile railroad’s treacherous western portion were laid by Cantonese laborers mostly from the county of Toisan, who were then decisively denied the right to American citizenship by the Chinese Exclusion Act of 1882, and left out of history. “Who else but Americans could drill tunnels in mountains 30-feet deep in snow?” US Secretary of Transportation John Volpe infamously demanded at the 1969 centennial celebration of the railroad’s completion.

Today, the nation’s memory, too, has begun to thaw, revealing silhouettes of these long-buried figures. Academics, artists, and community organizers have begun to recover Chinese railroad workers’ fragmented histories, assembling a body of work in celebration. This year, for the railroad’s 150th anniversary, Chinese Americans are showcasing these legacies in lively parades and archival exhibitions—replanting seeds of ancestral memory amid the gradual snowmelt of political amnesia.

To the chagrin of scholars, not one of the diaries or letters has yet been recovered from the original railroad workers. In the absence of first-hand voices, an international team of over a dozen scholars comprising the Chinese Railroad Workers of North America Project has spent the past six years scouring records, reports, archeological findings, remittance contracts, song lyrics, and the oral histories of descendants’ families to reconstruct the workers’ daily lives.

Their findings are summarized in Ghosts of Gold Mountain: The Epic Story of the Chinese Who Built the Transcontinental Railroad, compiled by project co-director and Stanford history professor Gordon H. Chang ahead of the railroad’s May 10 anniversary. The most comprehensive book to date on the subject, Chang recast railroad history from the perspective of the worker himself. “It could not be a traditional historical recovery,” he tells TWOC. “We needed people from different disciplines, such as history and archeology, but also from different places in the world, whether that would be China, Canada, or elsewhere.” 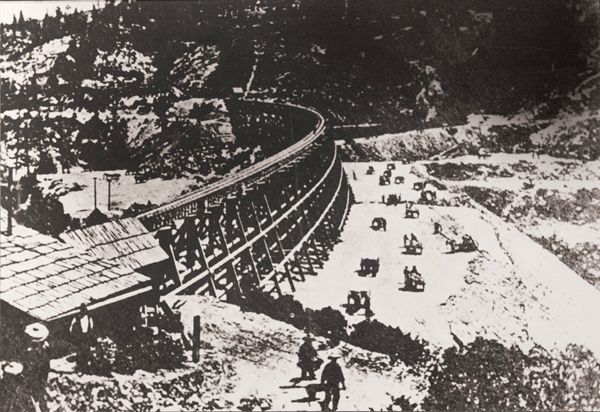 Tunneling through granite mountains required the dangerous use of handmade explosives

Far from being a mass of obedient workers, many Chinese organized and innovated in face of an unfamiliar land and systemic racism. California governor Leland Stanford, who became one of the richest men in America by financing the railroad, had reluctantly hired Chinese—originally a handful, then thousands—when he was unable to convince Congress to send black slaves out west, or persuade European immigrants to do the backbreaking work. Though he’d once complained that “Asia, with her numberless millions, sends to our shores the dregs of her population,” Stanford soon flipped face, characterizing the Chinese as “quiet, peaceable, patient, industrious and economical,” and—crucially—“contented with less wages.”

To Stanford’s surprise, these men later organized what was then the largest strike against a private employer in America, according to Chang. Along 30 miles of track, 3,000 laid down tools for a week in 1867; panicked executives “voluntarily” raised wages by 13 percent. In other shows of their extensive community networks, Chinese contractors hired cooks to travel with them, sourcing bok choy and even beloved fragrant pork sausage (lap cheong) to keep familiar recipes alive. However, these leaders also trafficked thousands of Chinese women to serve as sex workers, whose “horrible and short” lives are memorialized in six brief yet informative pages in Chang’s book.

Across China, teams of academics recovered poetry and folk songs composed by left-behind families: “How could you bear parting with me?” a young wife sings to her absent husband. “Sailing across the Pacific Ocean/ Leaving me alone, cold, and inconsolable on my pillow.” An aging father pleads his son to come home: “If you return home too late/ We may only meet in the after world/ However rich you may be at that time/ You will be facing our tombs alone and with only your sobs.” Yet remittances sent home funded entire schools, village halls, and diaolou guard towers in China. The story of Chinese railroad workers neither began nor always ended in America.

On the eve of the railroad’s completion, writer Daniel Cleveland expected “China and the United States will then strike hands, and feel more nearly drawn together in sympathy and interest than ever before.” Instead, Chang writes, any “glimmer of possibilities…eroded steadily and then violently.” In 1871, a mob of 500 mutilated, shot and lynched 18 Chinese in Los Angeles’s Chinatown; none of the perpetrators were convicted. In 1880, Denver’s Chinese community was attacked and burned by a 3,000-strong mob; city officials put 200 Chinese in jail for their own “protection.” Writing here, Chang, a fourth-generation Chinese American, loses his scholarly cool while describing a “deep anguish and anger…yet to be fully acknowledged” for “the blood contribution Chinese have made to America.”

Chang tells TWOC, “I am both angry and proud. The country is diverse and so too must be our understanding of the past.” This year, that deep anguish bloomed into profound and creative acts of remembrance across the US in honor of the railway workers’ legacies.

Connie Young Yu, the great-granddaughter of a railway foreman, strode up to the podium to give opening remarks for the 150th centennial at Promontory Summit, Utah. Fifty years prior, the speaker representing the Chinese American community had been bumped from the official program to accommodate the actor John Wayne. “We take this opportunity at the 150th to reclaim our place in history,” declared Yu.

As a young child in San Francisco’s Chinatown, Yu heard former railroad workers tell stories of being sent by district associations to look for the remains of the deceased along the tracks. They would retrieve from the ground a glass bottle, which workers would bury with the deceased’s family information written on a piece of cloth placed inside.

A bag of bones was all that was left of many workers; a shipment of reportedly 20,000 pounds of the remains to Guangdong in 1870 were the silent weight of their collective story. This May, their private longings were given flesh and song in playwright and composer Jason Ma’s Gold Mountain: The Musical. 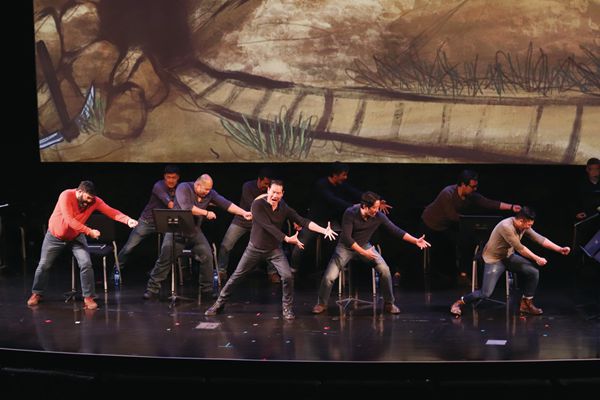 Jason Ma’s Gold Mountain: The Musical sings the story of a young man who lights fuses for a living

The protagonist, Lit, is a young railroad worker given the job based on his sprinting abilities: “Imagine you’re a young man whose job is to light fuses and run as fast as you can to stay alive… and then, do it all again,” reads the program. The idea came to Ma while working on Broadway musical Miss Saigon in 1994; he scribbled out the libretto, and 15 musical numbers, within months. After rejections from producers who worried about the marketability of the story, Ma realized that “back then…this kind of story was not welcome.”

The script finally came to life in 2015 when Ma showed the script to Broadway soprano Ali Ewoldt. The story hadn’t changed, but the world around it had: Hamilton was all the rage, and Crazy Rich Asians had swept Hollywood. “Every decade I pulled it out of its box, I’ve seen the reaction to it evolve. People began to hear it. All the criticisms that it wasn’t what they thought a Chinese story should be, started to fade,” Ma tells TWOC.

With the Utah State Commission’s official support, Ma’s story proved a hit in railroad country, where it premiered before audiences in Salt Lake City and Ogden, including around 150 descendants of workers, many of whom ran down the aisles screaming in excitement as the curtains fell.

The great-great-grandson of a Toisanese worker, Wilson Lee was another who wished to honor his ancestors’ labor—in the form of a 95-foot-long float, “Harmony Through Union,” at Pasadena’s annual New Year’s Parade of Roses, viewed by millions.

When Lee learned “Harmony’s” proposal had been accepted from hundreds of applications, he phoned his wife, Esther, to transfer the 6,000 USD deposit before they’d even secured donors. “The only thing I was more certain of is when I asked you to marry me,” Wilson told her.

On January 1, “Harmony” emerged onto the city’s crowded streets, remaking a famous 1869 photograph showing financiers and foremen grinning at the meeting point of the eastern and western railroad, where workers had driven the final spike into the ground. “There were no Chinese in the [original] picture,” notes Lee, who co-founded the Chinese American Heritage Foundation with Esther. “I wanted to correct the outrageous omission in American history.”

As a Vietnamese American lion dance group circled the trains to the jubilant clamor of cymbals and drums, the celebration was, says Lee, “a piece of art; a symbol of hope; a symbol of 150 years of struggle by all immigrants, of Americans of all colors, religions and backgrounds.”

Tracks Across Time is a story from our issue, “Tuning Up.” To read the entire issue, become a subscriber and receive the full magazine. Alternatively, you can purchase the digital version from the App Store.