Hubei-born artist Wang Renzheng, better known as “Nut Brother,” rose to international fame in 2015 after he walked the streets of Beijing with an industrial vacuum cleaner for 100 days and transformed the accumulated PM 2.5 particles into a physical brick—turning, in his words, “an invisible problem into a clearly visible object.” A mastermind of jarringly symbolic performances, he has grappled with issues from environmental protection to education for migrant workers’ children.

“It’s nerve-wracking,” Nut Brother says with a soft laugh. When he spoke with TWOC, he had recently been released from 10 days’ detention, and was still dodging invitations from public security officers to “have tea.” Nevertheless, the subversive artist shares what it is like to work within “the cracks of this larger ecosystem” to “reveal the hidden side of things.”

How did you begin as an artist?

Between graduating from university in 2004, and starting to do art in 2011, I was in advertising for many years. It was pretty painful. The goal of advertising is to encourage spending. Often, you take people’s weaknesses and enlarge them, and endlessly expand people’s desires. I find that art is a reverse process that can criticize these very things. Can you talk about your piece last year on water pollution?

Residents of Xiaohaotu village have complained of polluted drinking-water for many years. While the Shaanxi Environmental Protection Bureau admitted that the levels of heavy metals exceeded the standard, they wouldn’t admit that it was related to the natural gas and coal operations in the area.

So I went there with friends and investigated for around 10 days. We exchanged 10,000 Nongfu Spring water bottles with the villagers for their polluted drinking water. We brought the bottles filled with dirty water to exhibit in Beijing and Xi’an, creating a “supermarket” in the 798 Art District. It became a trending topic on Weibo. After around 10 days in Beijing, we were shut down for copyright infringement, so we got a van and continued to exhibit. The police came to us again and told us that we had parked illegally.

What has been the result of your piece? 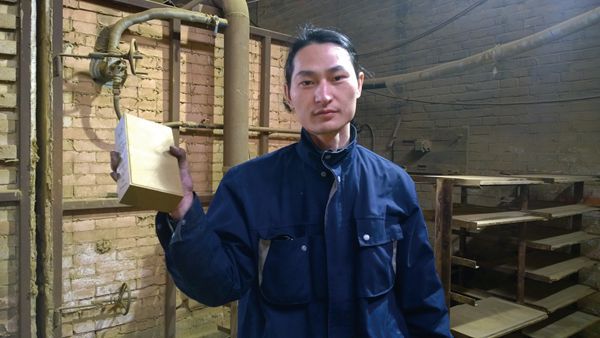 The water in Xiaohaotu hasn’t improved on the whole, but there are some steps forward. The government put forward money to make a deepwater well. The China National Coal Group strengthened the leaking base of their wastewater reservoir, and spent some money to treat the water. But Sinopec gave no response. They directly pour their wastewater deep underground. There’s still not a single person to stand up and say how we are going to clean it up.

Would you consider the piece a success?

We can’t say. There are small improvements, but to do this kind of work, failure is a foregone conclusion. What is success? For governments and businesses to admit that they do have a responsibility.

How is art related to society?

Art can’t be separated from society. Art should be on the scene of action, and connected to the people living on this Earth right now. Some art within the system is a vain production; it has no relation, no resonance—like the scenery atop the surface of a bubble. Sometimes I will do this kind of art, too. But I hope to work within society to observe, find and address problems, and call out to others. There are so many problems I know, they know, we all know, but we all pretend. We know that it may only be a gesture, but it’s important to push the issue forward. Even if the room for discourse that exists is like the sound of a rustling skirt.

Visible Darkness is a story from our issue, “Tuning Up.” To read the entire issue, become a subscriber and receive the full magazine. Alternatively, you can purchase the digital version from the App Store.