With growing numbers of Chinese suffering from sleep disorders, can medicine or the markets offer the best cures?

While most people spend around a third of their lives—around eight hours a day—fast asleep, there are plenty of others who feel they spend just as long trying to nod off.

Ji Jun, a 31-year-old employee in a Shanghai trade company, is among many who’ve struggled with insomnia. Her problem began about five years ago, when she began spending entire nights tossing and turning. There was no obvious reason. “Many times I just thought, ‘I won’t be able to [sleep] again tonight,’ and then I really couldn’t,” recalls Ji. “It was a vicious cycle. The worse I felt before going to sleep, the harder it was for me to sleep. Then the next day, I would be very drowsy at work.”

Ji is one of millions of insomniacs in China. It’s by no means a new issue—a proverb from the Warring States Period described a king as being “unable to sleep soundly in bed” (寝不安席) due to anxiety over matters of state—but nowadays, modern problems such as pressures of work, noise pollution, and the constant use of digital devices are more often blamed for sleeplessness. 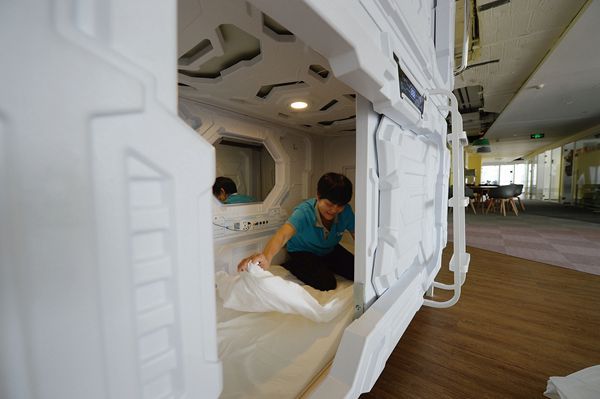 Statistics vary, but according to a 2018 report issued by the Chinese Medical Doctors Association, over 300 million Chinese have some form of sleep disorder, and the problem disproportionately affects the young—over 60 percent of the “post-90s” generation feel they don’t get enough rest. It’s not just a matter of feeling tired at work the next day: Ji has experienced an increase in related symptoms like migraine headaches, depression, memory problems, and hair loss.

A 2017 survey, conducted by Tencent and the French pharmaceutical multinational Sanofi, found that 80 percent of respondents had experienced sleeplessness. Two-thirds of sufferers said they needed more than 30 minutes to fall asleep, and more than half woke up at least twice during the night.

All of these symptoms can be classified as “sleeplessness” according to Dr. Sun Wei, head of the Sleep Medicine department at the Peking University Sixth Hospital, who divides the cause into three categories: “predisposing factors” such as hereditary conditions and personality; “precipitating factors” like a physical or mental disorder; and “perpetuating factors” such as treatments or responses that “aggravate the situation.”

Ji has tried a number of methods to tackle her condition, including herbal supplements, alcohol, and apps that claim to promote healthy sleep cycles, all without success. As the final resort, a psychiatrist prescribed sleeping pills but, she says, “When I took the pills, I just slept like I was dead…when I woke up, it wasn’t very comfortable, feeling lethargic.” Ji adds, though, that if she didn’t take the pills, she wouldn’t sleep at all. 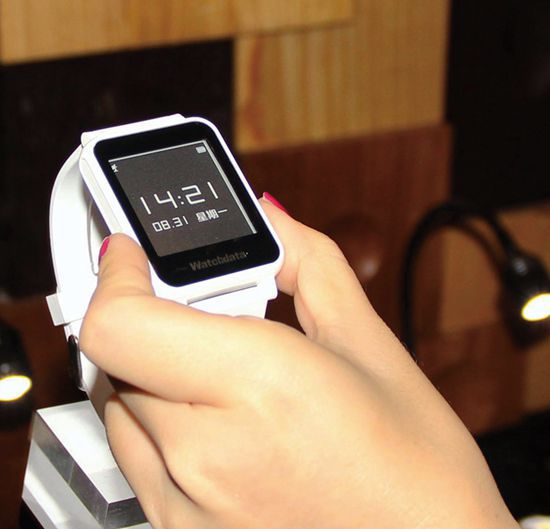 Prescription medicine isn’t a popular option among most insomniacs: Only 4.5 percent respondents to the Tencent survey stated they would go to the hospital for treatment, and more than 57 percent of sufferers would refuse to take any medicine at all. “I just don’t think it’s a big deal,” a 50-year-old accountant from Liaoning province, surnamed Chen, tells TWOC. Chen has endured insomnia for about four years, believing it is linked to menopause. “People at the change of life often can’t sleep well. It’s painful, but I don’t think I need to treat it specially. And I don’t want to become dependent on sleeping pills.”

“Not believing sleeplessness can be a disorder, and overestimating the side-effects of sleep medication, are both common misunderstandings among people,” says Dr. Sun, adding that some sufferers are simply resigned to thinking that the condition is incurable. Psychiatrist Liu Aimin adds that many patients feel shame about even admitting to having trouble sleeping: “Some people may think, why’s it me who has insomnia? Does it mean I have problems?”

Medication is not actually most doctors’ first recommendation, asserts Dr. Sun. Before treatment, almost all Dr. Sun’s patients first undergo Cognitive Behavioral Therapy for Insomnia (CBT-I), which involves a routine of going to bed at 10:30 p.m., getting up at 5:30 a.m., taking no naps, doing an hour’s aerobic exercises every day, and taking at least an hour out of each day to calm down and relax. “Basically, doctors will prescribe pills only when they have to,” says Dr. Sun, “meaning when the consequences of insomnia are more severe than the side effects of pills.” 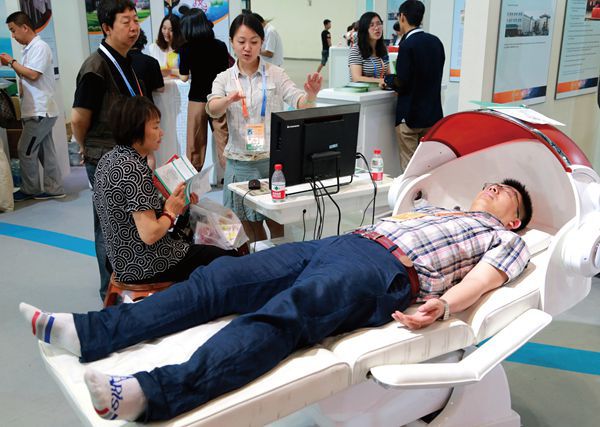 Despite this, Chen has little desire to see a doctor, preferring to draw her solutions from China’s growing sleep-aid market. Some months ago, Chen started taking melatonin, a hormone that helps regulate the sleep cycle, and bought a pillow stuffed with Chinese herbs designed to ease anxiety. She says now she’s sleeping better, if not necessarily longer. Whether or not that’s simply a placebo effect, Chen is also planning to buy a better mattress to further improve her rest.

Thanks to customers like Chen, the sleep-aid market had grown to around 280 billion RMB by 2017, according to the Bosi Data Research Center, with health supplements valued at 12.8 billion RMB, sleep-monitoring and assisting devices at 250 billion RMB, and sleep medication at 13.4 billion RMB.

Data from Tmall show that during the shopping site’s 2019 “618 Shopping Festival,” sales in imported snooze-inducing commodities grew 530 percent over the previous year, with melatonin jellies, essential oils and sprays, high-end bedding, and eye masks among the most popular items.

On Apple’s App Store, there are dozens of apps that claim to monitor sleep quality or assist one’s rest with soothing music, many of which have been downloaded tens of thousands of times; both Ji and Chen use them. A recent bestseller on e-commerce websites is the “Gravity Cover,” a heavy quilt weighing over 10 kilograms that claims to give users “pressure stimulation” to induce sleep. 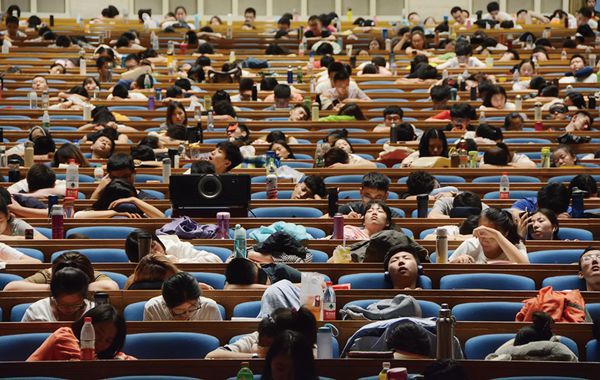 University students take a nap between classes in Shandong province

Also now popular in some first-tier cities like Guangzhou and Shanghai are “sleep experience” stores, which measure customers’ sleep quality with machines, and purport to identify the most suitable mattresses and bedding for their age or body type. Operators of “rental sleep pods” have set up in office buildings in Beijing, Shanghai, and Chengdu, charging red-eyed white-collar workers just under 10 RMB a pop to nap in a two-square-meter cabin during work hours.

But along with this booming “sleep economy” come concerns with the long-term effects and safety of some of these products. Last month, the phrase “melatonin may cause infertility” began trending on Sina Weibo, provoking widespread discussion over the popularity and use of such products. Sleeping pod services, too, have been suspended in all cities due to safety and privacy concerns. 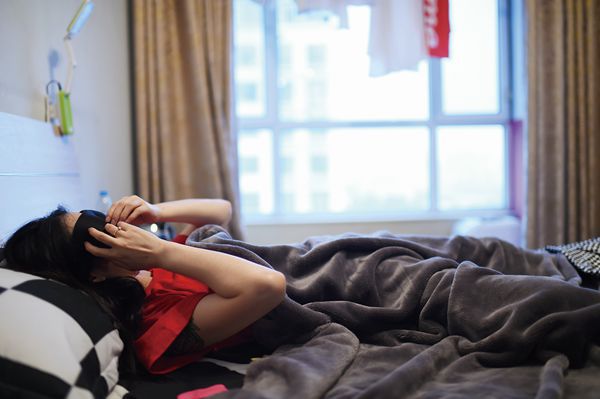 Doctors Sun and Liu both have reservations about these consumer products: Dr. Liu, the psychiatrist, worries that “there are no strict standards of how [sleep apps] deal with the data” they collect, which include users’ sleeping hours and quality, while Dr. Sun says that the effects of sleep aids are “unproven. They’re definitely less reliable than therapy prescribed by doctors.”

Ideally, insomniacs should seek professional help instead of trying to weather the condition by themselves, warns Dr. Liu. “In some cases, if people let sleeplessness develop uncontrollably, their health condition may all of a sudden ‘fall off a cliff’ at some point.”

The stakes of ignoring the symptoms may be great. According to the US National Institutes of Health, insomnia can increase risk both for physical conditions—including stroke, heart disease, diabetes, high blood pressure, and more—and mental illnesses, including depression, anxiety, confusion, and frustration. There are even economic costs to sleeplessness: A 2013 RAND Corporation report suggested that lowered worker productivity caused by insufficient sleep cost the US 411 billion USD a year, about 2 percent of its GDP. 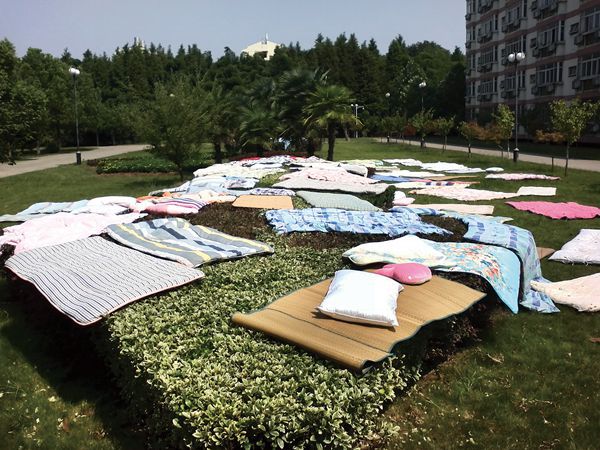 Although the country’s first specialized center for treating sleep-related disorders was founded in 1982 at the Peking Union Medical College Hospital, sleep is not a specialization offered at most medical schools, and sleep disorders have begun to receive recognition from the public only in recent years. Dr. Sun estimates the number of sufferers at nearly 400 million, but points out there are only around 10,000 doctors in China who specialize in sleep treatment, and many are simply transferred from other hospital departments. “Sometimes, patients know they need professional help, but don’t know where to find it,” says Dr. Sun.

Of course, not all sleeplessness can be classified as a medical condition: Only sleeplessness that occurs more than three times a week over a period of three months or more can be called insomnia, according to Dr. Sun; many so-called “insomniacs” probably just have irregular or unhealthy daily routines.

Liu Anqi, a 27-year-old bank employee in Liaoning province, is typical of the latter. Liu says she hasn’t had a good night’s sleep in nearly a year, but admits to suffering “stay-up-late compulsive disorder,” a tongue-in-cheek name for being a night owl. “Every night I tell myself I should go to bed early, but I just can’t,” she tells TWOC. “If I go to sleep, I will soon have to face another day of work.”

Liu Anqi’s “condition” is common among the younger generations, according to the CMDA report, which found that over 27 percent of post-90s don’t sleep until after 1 a.m., while 48 percent go to bed between 11 and 12 p.m. Over 30 percent need more than 30 minutes to fall asleep. Smartphones, the report notes, seem to be the main culprit: Nearly 60 percent of post-90s use their phones before sleep, and about 37 percent spend more than 50 minutes on them. “I don’t know what I’m doing with my phone, just checking social media, watching videos,” says Liu Anqi. “Then, it’s past midnight, and it’s hard to fall asleep.”

This year’s Tmall statistics showed that 80 percent of their melatonin consumers are post-90s, who also make up 62 percent of imported sleep-aid product consumers. But although Liu Anqi admits to be feeling tired during the day, she doesn’t want to change her habits. “I just want to feel more conscious during the day, not sleep more at night,” she says. “The nighttime is so precious, I don’t want to waste it on sleeping.” She even quotes the 20th century writer Xiao Hong: “What’s the need to sleep long during life? After death, you can rest forever.”

Hopefully, though, China’s insomniacs won’t end up learning the truth of this saying the hard way. “People should adjust their rest time on their own initiative,” Dr. Liu, the psychiatrist, suggests. “Only when you really want to change, can the condition become better.”

Sleepless in China is a story from our issue, “Tuning Up.” To read the entire issue, become a subscriber and receive the full magazine. Alternatively, you can purchase the digital version from the App Store.