Ivory skin, shapely eyebrows, and a full figure: many of ancient China’s well-known beauty standards were based on looks that were hard to maintain in times of hardship and poverty. Likewise, a full, healthy set of teeth was a rare achievement in the days before electric toothbrushes, toothpaste, and dental floss.

Accordingly, oral hygiene was highly valued: The ballad “Shuo Ren,” recorded in the 3,000-year-old The Book of Songs, depicted a (quite literally) toothsome woman as having “teeth like rows of melon seeds (齿如瓠犀)”—that is, white and even. “Song of a Beauty” added another characteristic: “When she sighs, her breath is as sweet as orchids (长啸气若兰).”

The oldest and most widely prescribed way of keeping one’s mouth and teeth clean was gargling. According to The Book of Rites, in the Zhou dynasty (1046 – 256 BCE), “the whole family washes up and rinses their mouths after the cock crows,” indicating that the habit has existed in China for at least 2,000 years.

Sun Simiao, the legendary Tang (618 – 907) physician known as the “King of Medicine,” prescribed salt water as the ideal mouthwash: “Every morning, put a pinch of salt in the mouth, take a mouthful of warm water, and hold it [in the mouth]…it will keep your teeth firm,” he wrote in Essential Formulas for Emergencies Worth a Thousand Pieces of Gold. In the 18th century novel Dream of the Red Chamber, the characters gargled with tea. Ancient nobles sucked on cloves to freshen the breath

Simply rinsing, though, has never been enough, and the Chinese began to brush their teeth quite early in history. In the Tang dynasty, it was common to soak a twig of willow in water every night before bed and chew on it the next morning. The fiber of the willow, protruding like a comb, would scrub the teeth clean. The Chinese idiom “晨嚼齿木 (chew wood at dawn)” concisely described this practice.

In 1984, a toothbrush dating back to the Tang dynasty was unearthed in Chengdu, Sichuan province. It looked remarkably similar to the modern version: a long handle made of animal bone, and two rows of holes drilled into the head, which were to be filled with bristles of animal hair. In the 13th century, scholar Wu Zimu recalled in his memoir A Dream of Millet that shops specializing in manufacturing and selling toothbrushes had become prevalent in the capital Lin’an (Hangzhou).

Toothpaste had emerged even earlier. Known as “tooth medicine” or “tooth powder,” ancient toothpaste shared ingredients with many other traditional remedies. According to the Song physician Zhang Gao, a popular tooth medicine in the fifth and sixth centuries was obtained by boiling honey locust fruit, ginger, foxglove, lotus leaves, and several other herbs into a paste that could whiten the teeth, reduce inflammation of the gums, and ease toothache. 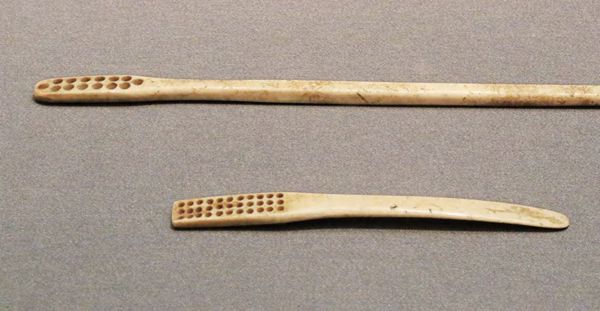 In order to “吐气如兰 (exhale like an orchid),” some people sucked on oranges, parsley and Sichuan pepper before social visits. The most effective breath-freshening agent was said to be cloves, an expensive spice also known as “chicken tongue fragrance” (鸡舌香) in ancient times. According to The Rituals of the Han Palace, a Han dynasty (206 BCE – 220 CE) official once reported work with cloves in his mouth. His supervisor, impressed, spread his fragrant reputation to others, and it soon became fashionable among high officials and nobility to suck on cloves while speaking.

Despite these efforts, dental disease was unavoidable. The earliest record of dentistry practice in China was found in the Han dynasty’s The Records of the Grand Historian, in which the physician Chunyu Yi used acupuncture and kuh-seng soup to cure an official’s tooth decay.

Zhang Zhongjing, the “Medical Sage” of the Han dynasty, prescribed a tooth decay remedy that called for crushing realgar, a ruby-colored mineral, and whitlow grass into a powder, then melting it lard. A cotton swab was dipped in the mixture, then “[lit] on fire to burn the affected area with.” (People now speculate that Zhang’s method simply killed the dental nerves.) Historical records from the Tang dynasty also showed dentists using pewter, silver foil, and mercury to fill in cavities.

When all other remedies failed, the patient had to face tooth extraction. This painful solution could be deadly in the days before modern antiseptics—as indicated by China’s earliest recorded dental surgery in the year 329. According to Records of the Three Kingdoms, a 42-year-old prefectural governor named Wen Qiao had to have a diseased tooth pulled. Unfortunately, this caused a stroke, and Wen died within 10 days of the surgery. Doubtless, his tragic tale would have been used by future generations of parents to remind their children to chew more tree branches, and gargle with saltier water and stronger tea before bed—lest they be faced with a dangerous trip to the dreaded dentist’s chair.

Teething Trouble is a story from our issue, “The Good Life.” To read the entire issue, become a subscriber and receive the full magazine. Alternatively, you can purchase the digital version from the App Store.