Since the start of the global Covid-19 pandemic, tens of thousands of employees of the cruise and shipping industries have been stranded on the sea and in ports around the world, unable to return home due to border closures and sailing bans. Li (pseudonym) is a cruise liner employee who had been sailing in the Caribbean and is now en route to the UK, from which she hopes to be repatriated to China. She has consented to share her story with TWOC.

Today is the 79th day that we have been adrift on the ocean. As a ship employee, my whole life during the pandemic has been contained within a cruise liner of a dozen or so decks; no port, no land, no city life; no birdsong or the smell of flowers.

Of course, I’m not alone. As the novel coronavirus spread across the US, there are tens of thousands of crew members like me who have been stranded on everything from passenger ships to cargo ships, from many different companies.

I work on a cruise ship, as part of the hospitality team. The ship I work on can carry 4,900 customers at the most, with around 1,600 staff. On a normal route, the number of customers is normally around 4,500 to 4,800, so it’s basically full. My contract began on December 1, and finishes on July 1, when I can start my vacation. The liner I worked on has its home port at Bayonne, New Jersey, half the time, and cruises an itinerary on the Caribbean; the rest of the time its home port is in Southampton, UK, when it runs a European itinerary. In the Caribbean, most customers come from the states of New York or New Jersey, and there are two types of itineraries, seven days or 11 days. 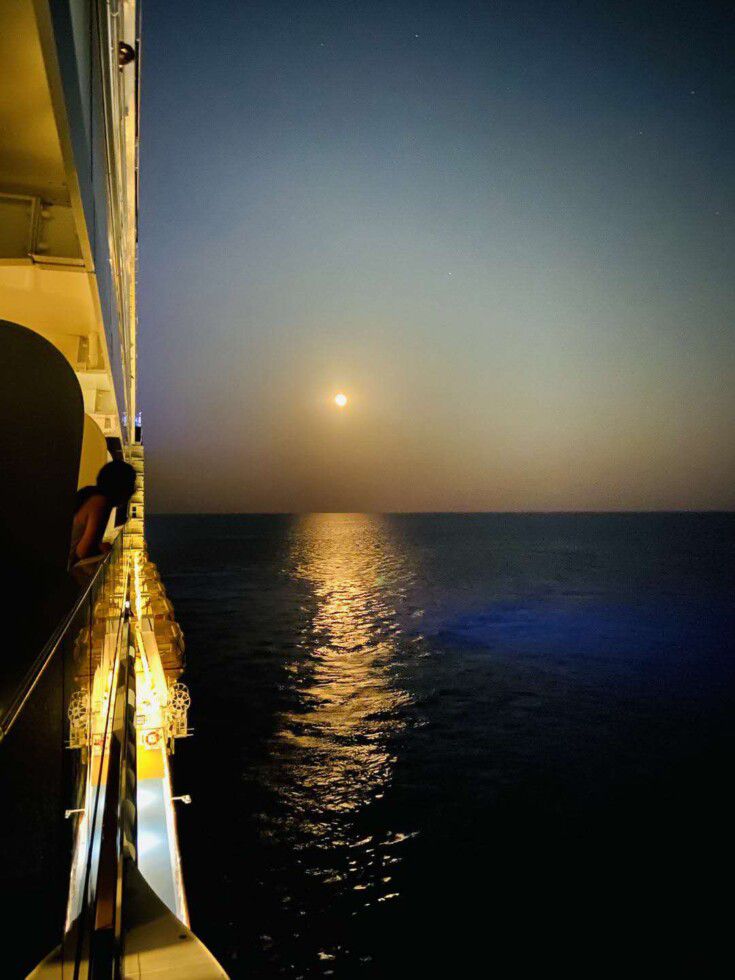 When it’s winter in the US, all the routes are extremely busy, as people want to escape the winter and enjoy the Caribbean heat and warm sea. This busy period should have continued until the end of March or beginning of April, when it’s spring break in the US. But everything came to an abrupt end on March 15.

My last seven-day itinerary before the cruise liners stopped running took place from March 8 to March 15, and on the surface, everything was normal. But the staff was already in a state of anxiety because the number of Covid-19 infections in the US was climbing. The pandemic was getting more and more serious, but as long as customers hadn’t cancelled their trip, our company stated we would sail as normal. Yet if a customer got infected, then sooner or later, all of us living together in such close quarters would likely get infected en masse, and we would become the next Diamond Princess.

Matters developed more quickly than we expected. More and more customers cancelled. Although the company still hadn’t said we would stop sailing, we all knew it was getting serious. Lots of ports started to refuse ships to dock, and big amusement parks on land began to close, so it was inevitable that we would stop sailing. Finally, on March 11, US President Trump announced a formal ban on travel, and specified that cruise ships must stop sailing for 30 days.

Everyone heaved a sigh of relief once the sailing ban was announced. At 6 a.m. on March 15, after we arrived in Bayonne, customers and all the staff whose contracts were up left the ship. We set sail again from Bayonne at 4 p.m. in the afternoon as normal, except without any customers. Everyone was optimistic; it was only 30 days on the sea, and as long as we were healthy and there was no virus, these 30 days were nothing. At this time, we were still getting our salaries as normal.

After we stopped operating, there were just 1,600 of us staff on a ship that could accommodate up to 6,000. Every night we had a themed party, DJ, and (limited) free alcohol. In the theater, performers would put on a show for all the staff every day; the activities department set up all sorts of activities for us, like bingo, themed quizzes, Latin music and dancing, yoga, fitness classes…The company and all the crew were optimistic, as though the virus had simply put our lives on pause.

Soon after, the US Center for Disease Control extended the ban from 30 days to 60 days, then to 100 days. This was proof that matters weren’t going to turn out as rosily as we’d imagined. 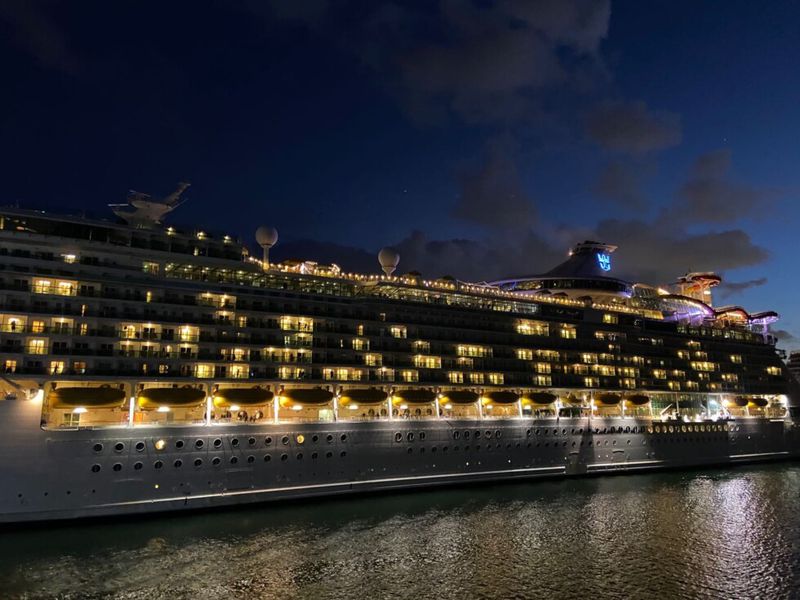 The cruise liner Li worked on occasionally docked in Miami for supplies, but no one was allowed to disembark (photo courtesy of the author)

As the travel ban was extended, the company changed their policy. For most staff, there was no more work, and no salary. On March 24, all staff on board received an email from the CEO: only essential facilities on the ship would be kept open, and have their staff retained. All other staff will have their contracts terminated early; March 25 was to be our last day on the clock. Depending on the length of our original contract, we would receive at most one additional month’s salary, and the company would try to book flight tickets home for all staff whose contracts they terminated.

As infection numbers in the US climbed each day, the CDC announced more virus prevention standards. We were moved from the staff dormitory to what were originally passenger cabins to start our 14-day isolation. Our temperature was taken twice a day, and only those who performed essential work could leave their rooms.

From that time, everyone’s state of mind quietly changed, from enjoyment to a slow anxiety and panic. Everyone hoped they could get back home quickly.

But the road home was beset with difficulties. Each country’s border controls are frequently changing; lots of countries simply closed their borders. Even though my own country, China, remains open to Chinese citizens, flights are being continuously reduced, and it’s very difficult to get tickets due to the large number of students who are also stranded abroad. I can’t remember how many times the captain announced a plan to get us home, and then, at the last minute, it was changed or cancelled. For the whole of April, they were only able to repatriate around 250 staff out of 1,500 on my ship. A plan to charter a flight home for Chinese nationals on May 12 ran into difficulties and eventually came to nothing.

Suddenly, it was May. Except for docking occasionally in Miami to stock necessary supplies, we’ve spent this whole time floating on the sea. Sometimes we float close to Miami, and I can faintly see the outline of the city and the harbor. But no one can leave the ship.

According to a new update from the company in May, crew members stuck on board of ships will be separated and transferred to different ships according to their nationality.Indian crew members were put on the ship I was then on, and sailed directly from the Caribbean to Goa. Ships carrying other staff (most of them European or American) dropped anchor near Barbados, where they could wait for flights to open up to fly them to their own countries.

Another part of the staff (mainly Asians and Africans, including me) was gathered together on two ships that would sail directly from Miami across the Atlantic to Southampton in Britain, then wait for flights from the UK to return to our own countries. Just like that, we have started to cross the Atlantic Ocean and will soon enter the English Channel, aiming for Southampton.

How do you live in a place that you can cross on two feet, where your movements are so circumscribed? Before, you could put all your mind on your work, and you don’t have to spend too much time thinking about how to arrange your own life.

When all the onboard facilities were open, it was also easy; you had almost too many activities to choose from. Most of us attended a party in the evening, woke up naturally the next morning, and ate. After lunch, when the sun is out, you could swim or sunbathe on the deck, then go exercise at the gym, or catch a show in the theater, or just hole up somewhere with your phone—all the staff could use the onboard WiFi for free after we stopped operating, because the management knew we had to keep in touch with our families back home; it used to cost 4 USD per hour to use.

After the quarantines began, things got much quieter. With most of the facilities closed, our lives slowed down. After we completed our 14-day isolation, all the staff were issued masks that we had to wear whenever we left our cabin. They began to strictly disinfect the entire ship, and we were pulled back into reality. This was no vacation; we were a group of vulnerable people stranded on the ocean by a virus.

But our days aren’t so hard, either. The cafe and bar are still open, and it has become most people’s habit to have a cup of coffee in the morning and a drink or two after dinner. You couldn’t use the gym, but you can work out in your cabin during isolation, or walk on the deck after. There’s a TV in every cabin, and sometimes we organize online activities like bingo and trivia. And after we moved ships, you became surrounded by people from your own country. Even if you had never worked together before, when you’ve been suddenly cut off from land, your shared language, skin color, and habits make you feel like you are a little closer to home.

Text has been edited for length and clarity.

Li Jing is a contributing writer at The World of Chinese.