In 2019, the Organization for Economic Cooperation and Development ranked China fourth out of 68 countries worldwide for enforcing classroom discipline, shocking Chinese netizens—who felt they could have placed even higher.

“I wouldn’t have been surprised if China had ranked first,” says Sun Simiao, a 22-year-old kindergarten teacher in the northeastern Liaoning province. “Chinese students have been made to behave well since kindergarten. It’s written in our genes.”

Over 2,000 years ago, the sage Mencius concluded: “Nothing can be accomplished without rules and order (不以规矩，不能成方圆).” This doctrine seems to have been the gospel of Chinese educators ever since. Though the details may vary by class and teacher, almost all who grow up in the Chinese school system have encountered harsh, arbitrary, and bizarre rules and punishments in their educational careers.

Before every class, Sun repeats three rules to her kindergarteners, aged 4 and 5: Focus your eyes on the teacher, place your hands on the desk, and raise your hand if you want to say something in class. “This is routine for our kindergarten, and I don’t think it’s very harsh,” says Sun.

According to Sun, this discipline is often self-enforced. The children always pay attention to the best behaved members of the class, and become better disciplined out of a competitive urge, because they are often told by their parents and other adults that “the teacher likes the best behaved kid.”

In kindergarten, “you are very obedient (听话)” was a compliment Sun often heard from her own teacher. “We were required to follow many rules—no talking during class, raise your hand before answering a question, eat lunch quickly, and fall asleep quickly during naptime,” she recalls. 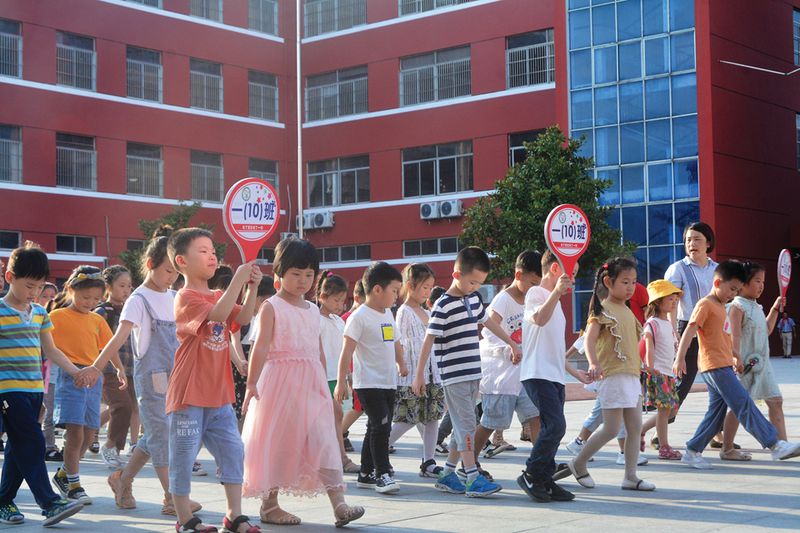 “If the kids did something well, they got a small red flower stamped in their notebook, and the one who got the most flowers could walk hand-in-hand with the teacher at the front of the class when we finished outdoor exercises the next day,” she says.

“Our teacher stipulated that when we raised our hands, the elbow couldn’t leave the desk, in case the heights would be uneven,” reminisces 32-year-old Wang Zhuo from Liaoning province. “When you put your hands on the desk, the right hand should be on top of the left, because you could only raise your right hand.”

This changed in the ninth grade, when Wang was preparing for the high school entrance exam. His teacher allowed the class to answer questions without raising their hands in order to maximize teaching time, but the damage was already done. “As a result, nobody answered questions,” Wang says.

Educators sometimes recognize the harshness of discipline, but feel they have no choice. “I want to give students the freedom to discuss, but I can’t allow them to disrupt the class,” a math teacher from Wang’s former middle school, surnamed Yu, tells TWOC.

“We are not like other countries, where one teacher just teaches a couple of students, and they don’t have to take the high school or college entrance exams,” Yu argues. “There are 50 or 60 students in one class; if everyone just says one word, there will be no time left for teaching.”

Though the Ministry of Education issued regulations in 2002 that capped primary and middle school class sizes at 50, oversized classes are still common; as of 2019, the ministry identified eliminating classes of over 66 students as an unmet goal.

Yu tells TWOC that he only has three rules for his class—no tardiness, no talking, and no distracting others—and has never enforced physical punishment. “I always tell my students, the more time I have to spend on enforcing discipline, the less time we have for study. It will be they who suffer the loss.”

There’s some evidence that good classroom order can improve students’ academic performance. In the 2015 BBC documentary Are Our Kids Tough Enough, five Chinese teachers brought their teaching methods to a middle school in the UK, emphasizing discipline and unidirectional lecturing. The students they taught received better marks in all subjects, including math and science, than their other British schoolmates.

But one of the Chinese teachers admitted on camera that the Chinese approach may “to some extent curb the students’ imagination, freedom of thinking, critical thinking, and creativity.”

Centuries of Confucian morality has led to public acceptance of teachers disciplining students. As a Chinese saying goes, “A teacher for a day is a father for a life,” demonstrating the high level of respect teachers are expected to command.

Many argue, though, that the teacher’s disciplinary power can easily be abused, and some students pay a long-term physical or psychological price. Li Ming (pseudonym), a 31-year-old photographer in Heilongjiang province, can still remember when he was punished by his teacher in middle school because he shouted and ran inside the classroom during the evening self-study period. “She slapped my face in front of the whole class. I was pushed from one side of the podium to the other.”

Li says that 20 years ago, experiences like his were far from rare, though China’s Law on the Protection of Minors, Compulsory Education Law, and Teacher’s Law all have articles clearly prohibiting corporal punishment. “My parents even told my teacher to ‘treat him like your own kid, and feel free to hit him if he doesn’t behave,’” Li says.

Today, the balance is beginning to shift. In 2018, a man surnamed Chang in Henan province ran into his former middle school teacher on the street, beat him, filmed the process, and put the video online, stating it was revenge for being hit and abused by the teacher 20 years ago.

In July 2019, a middle school teacher in Shandong province was suspended from her job after she kicked and beat a pair of truant students with a textbook. She also lost her year-end bonus, and was placed onto her county’s social credit blacklist.

Cases of discipline gone wrong have been causing more and more public consternation. In 2018, 14-year-old Tang Yuxin from Hunan province committed suicide after a teacher criticized her poor academic performance, and her parents asked her to write a “self-criticism.” In 2014, a 10-year-old girl surnamed Zhang from Shaanxi province jumped from a three-story platform and died, after her teacher singled her out for criticism in their class QQ chat group because she brought snacks to class.

Psychologist Zhang Chi has noted that the ignoring of individual difference in the Chinese education system is probably a cause of these tragedies. “Everyone has a different personality, based on different family backgrounds…everyone’s response to criticism is different,” he said in an interview with China Education Network Television. “It’s necessary [for educators] to understand each child’s background, so that you can better help them, or your help will probably turn into harm.”

Chu Zhaohui, a researcher from the National Institute of Education Sciences, told CETV it’s also necessary to alleviate the students’ study and exam pressure and give them room for mental growth. “We need to let children act on their own, so that they can correctly understand the relationship between people, between humans and nature, and between individuals and society.”

Parents are also taking matters into their own hands. In 2017, a parent from Huizhou, Guangdong province sued a teacher who pinched and slapped his fourth-grade son for breaking a classmate’s umbrella, asking for a public apology and 15,000 RMB in compensation from the school. In a more extreme incident, a teacher in Sichuan province was beaten up by the parent of a student in 2018, because he once suspended the student for playing with his phone in class.

China Comment magazine has argued that the conflicts between teachers and parents are partly because teachers are expected to be responsible for everything, from students’ academic success to emotional maturity. “Today’s teachers are taking on more responsibilities than they should, and there are no clear boundaries to their job.”

China’s authorities are currently trying to standardize teachers’ disciplinary power, while ultimately affirming their basic power to manage the classroom. In November 2019, the MOE asked for public feedback on a draft of new rules meant to guide elementary, middle, and high school teachers in enforcing classroom discipline.

The draft forbids the use of corporal punishment, as well as “being made to stand for an abnormal length of time,” but allows punishments like “standing or facing the wall inside the classroom for no longer than one class period” and “requesting parents to sit with their children in class.”

But Yu doesn’t think the new rules will make a big difference. “The climate has already changed. There is already a trust crisis between the teacher, the students, and parents. A responsible teacher ought to discipline students, but nobody likes asking for trouble.”

Class Conflict is a story from our issue, “Grape Expectations.” To read the entire issue, become a subscriber and receive the full magazine. Alternatively, you can purchase the digital version from the App Store. “Some of the teachers are still kids themselves.”