The Yunnan high school that sent 1,600 girls to college

“Educate girls,  and you can change the fate of three generations,” Zhang Guimei, the 63-year-old founder and principal of a girls’ high school in Lijiang, Yunnan province, says in a recent CCTV documentary about her work.

Zhang has spent over 40 years teaching in rural Yunnan, including 24 years in the impoverished Huaping county, dedicating her life to improving the lives of girls from poor backgrounds through education. Her free high school has helped over 1,600 rural girls, many of them ethnic minorities, enter college and university.

Zhang’s story highlights the still vast gulf in education between China’s rural and urban areas, particularly for girls. A stubborn cultural preference for boys means that many families emphasize sons’ education over daughters’, while a lack of resources, low teacher salaries, and poor infrastructure make it difficult for rural schools to retain their students, especially girls.

Sohu News reported in 2017 that the dropout rate for middle school students in rural areas was as high as 63 percent, compared to the 90 percent of urban students who matriculate to high school. According to a 2015 survey of 1,400 children by the state-run China Children and Teenagers’ Fund and the All China Women’s Federation, the dropout rate for girls peaked between the 3rd and 6th grades, much earlier than that of boys, at 9th grade. Whereas boys primarily dropped out due to lack of interest, poverty was the top reason for girls abandoning their education, and girls often lacked time to study at home because they had to assist with housework.

Zhang has spent decades fighting against these trends. In 1996, after her husband’s death from illness, Zhang, originally from Heilongjiang province, signed up to be a volunteer teacher in Huaping county. When she became seriously ill with hysteromyoma in 1997, local villagers raised money for her medical expenses, and she vowed to repay the community by providing education.

When Zhang started her work, much of her efforts were met with frustration. In 2001, she attempted to establish a welfare home for abandoned girls in Huaping, but funding was hard to come by. Zhang went door-to-door looking for donations, but only managed to raise 10,000 RMB between 2002 and 2007.

Zhang finally attracted attention in 2007 when she was elected as a member of China’s National People’s Congress. According to Xinhua, a reporter noted Zhang’s ragged clothing at the formal meeting in Beijing, and began to inquire into her story. News of Zhang’s work spread, and Lijiang city and Huaping county agreed to grant her 1 million RMB to open a school.

Zhang used that money to found Huaping Girl’s High School in 2008, the first tuition-free high school for girls in China. In her years in rural Yunnan, Zhang witnessed countless abandoned, orphaned, and neglected young girls drop out of school due to financial need, a lack of encouragement, or family pressure. “We often say, every child should have an equal starting line, but these girls don’t even have the opportunity to make it to the start of the race,” Zhang told Xinhua. 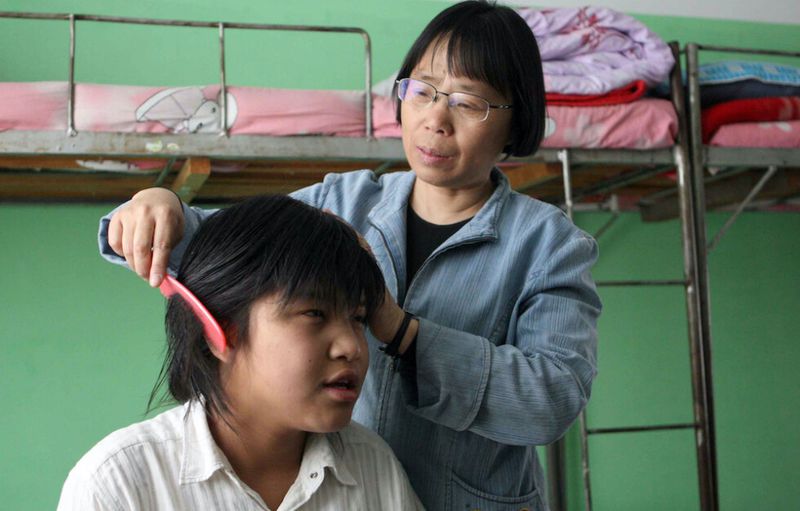 In its first year, the school recruited 16 teachers and enrolled 90 students. The school set no minimum grades for admission, instead welcoming any girl who wished to study.

But the students’ poor fundamentals and the harsh campus conditions caused nine teachers to quit within six months. Zhang and the remaining staff persisted, and to persuade wavering students and families not to drop out, Zhang has reportedly travelled a total of 110,000 kilometers to visit the homes of over 1,300 students over the years, often braving difficult mountain roads. Remarkably, in 2011, Huaping Girl’s High School graduated 100 percent of the students in its first-ever class.

The testimonies of graduates from Zhang’s school suggests real life-changing impact. “If I hadn’t attended the girl’s school, I would not be a police officer, but might be someone whom the police enforces laws against,” Chen Fayu, a Huaping graduate who is now a public security officer in Lijiang, told Beijing News. After primary school, Chen didn’t have the grades to continue to middle school, and was encouraged by her father to return home, work the fields, and find a husband. Zhang complained to Beijing News that some stubborn parents and grandparents still don’t prioritize girls’ education—refusing to let the girl use electricity at night to study, or even visit her at school.

Zhang’s work has begun to bear fruit. Huaping Girl’s High School saw all 159 of its graduating students admitted to higher education, a feat almost unheard of for a rural school. Of these graduates, 70 were admitted into China’s “first-tier” universities, the most of any high school in Lijiang. The school has achieved a 100 percent acceptance rate to university or technical college for nine consecutive years, compared to a province-wide average of 54 percent for science courses and 32.6 percent for the liberal arts.

Its principal, though, hopes to achieve even more. “We still lag behind many schools in big cities,” Zhang told CCTV. “I wish all my students to enter key universities, and take Peking University and Tsinghua University as their highest goal.”