How the 2,000-year-old Dujiangyan irrigation system solved flooding in Sichuan

“The divided water of the Minjiang River boons a vast land, and cultivates creatures in the Land of Abundance,” goes a line by poet Huang Yu in his poem Dujiangyan (《都江堰》), praising an irrigation system that has helped nurture the Chengdu plain since the third century BCE.

Before the completion of the Dujiangyan system, named because of its location in what is now the city of Dujiangyan, the Sichuan basin was frequently devastated by flooding. The ancient Shu kingdom, which covers the same approximate area as today’s Sichuan province, was referred to as “the inundated land (泽国)” and the “red basin (赤盆),” as its lands were frequently submerged under water from the Minjiang River.

The Minjiang starts high in the Min Mountains, flowing fast through narrow and steep stretches, eventually reaching lower ground. During the springtime, when melting ice from the mountains would increase the flow of water, the Minjiang would often burst its banks as it reached the heavily silted and slow-moving water in the Sichuan basin. Guan county (about 60 kilometers from Chengdu), where Dujiangyan is located, was particularly hard hit by the annual floods.

After the Qin state conquered the Shu in 316 BCE, the king of Qin hoped to better control the flooding in the hope of using the area as a military base for further conquest into the neighboring Chu kingdom. Qin official and engineer Li Bing (李冰) was dispatched to investigate the flooding and devise a solution, assisted by his son Erlang (二郎) in some historical records. 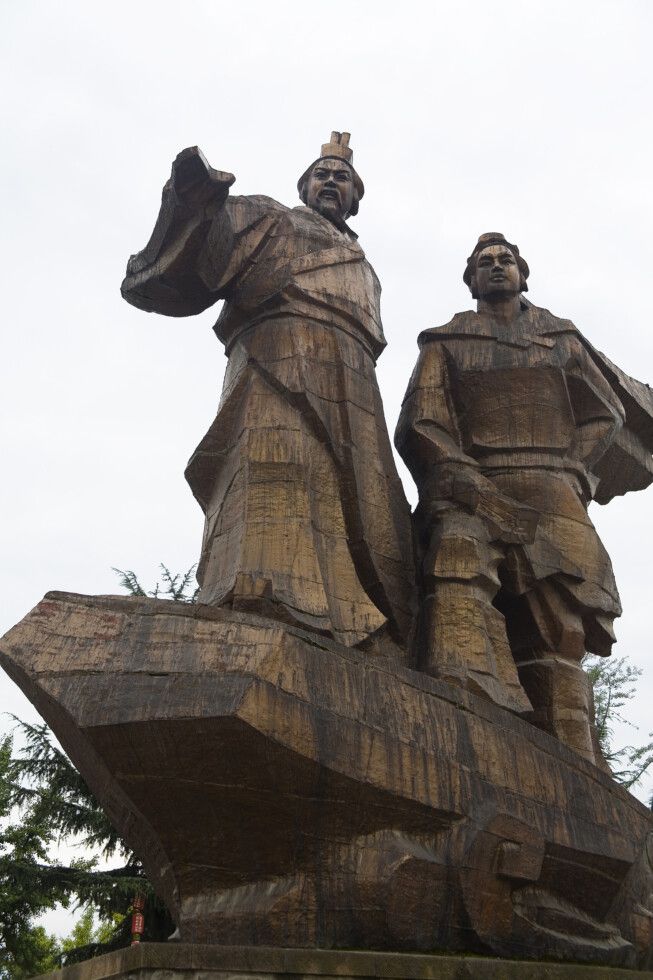 Statues of Li Bing and his son, who devised the irrigation system at Dujiangyan (VCG)

The solution, the Dujiangyan, is considered one of the largest and greatest engineering projects in Chinese history. Completed in 251 BCE, it was one of the earliest river diversion projects achieved without the use of dams, and is still in use today.

Li’s water diversion system was made up of three main parts: the “fish-mouth levee,” the “flying sand spillway,” and the “bottleneck channel.” The fish-mouth levee was an embankment built to split the Minjiang into an “inner” and an “outer” river. The inner river was built deep and narrow, and was used for irrigation, while the outer river was wide and shallow, and drained away excess water and much of the silt. In the dry season, the inner river carried 60 percent of the river’s flow for irrigation, and 40 percent in the rainy season, tackling the problem of seasonal flooding. 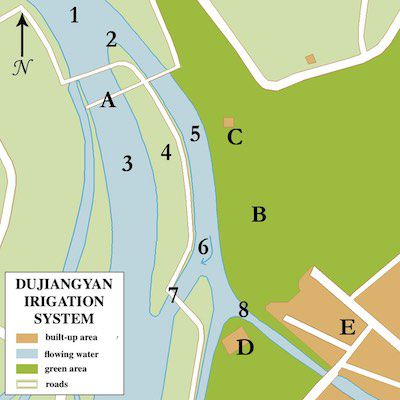 Map of the Dujiangyan irrigation system showing the “fish-mouth levee” (2), the “flying sand spillway” (7), and the “bottleneck channel” (8).-(Wikimedia Commons/Translated)

The bottleneck channel was a carved through the mountains as a run-off for excess flow and to distribute water to farmland. Smashing a channel through the mountains was no easy feat in the third century BCE, and would have taken perhaps 30 years of work using human labor, hammers, and drills. But Li instead pioneered the use of thermal expansion and contraction techniques to crack the rock by heating it with fire and then quickly cooling it with water. The channel cut through the Yulei Mountain and was completed within eight years, diverting water for irrigation to the east and relieving water pressure elsewhere.

The flying sand spillway functions for sluicing, desilting, and regulating water flow. The spillway connects the inner and outer rivers. When the water from the inner river reaches maximum capacity at the entrance to the narrow bottleneck channel, excess water flows into the outer river. During Li’s time, bamboo cages were used as a fence in the spillway to help regulate the flow of water; this has now been replaced with a concrete version. The swirl of the water created by the bottleneck channel and the spillway help to remove silt and sediment. When facing a catastrophic flood, the dike will break to discharge the water into the main current of the Minjiang River.

“After the completion of Dujiangyan irrigation system, people who lived in the Chengdu plain would no longer suffer the harassment of the Minjiang River. Thereafter, people here can live in huge abundance away from starvation,” Sima Qian wrote in his Records of the Grand Historian (《史记》) in the first century BCE. Li Bing’s ingenious irrigation system at Dujiangyan paved the way for the Sichuan basin to become one of the most fertile farming regions in all of China, nicknamed the “Land of Abundance (天府之国).”

The irrigation system was awarded the status of World Cultural Heritage Site by UNESCO in 2000. Statues of Li Bing and his son have been erected at Erwang Temple near the irrigation site. Now the area is a popular tourist destination, where vistors can, in the words of distinguished writer Yu Qiuyu, “experience the water culture in Dujiangyan and worship the Daoist culture in Qingcheng Mountain (拜水都江堰，问道青城山).”