Long before China’s mission to Mars, ancient history deemed the “fire planet” an omen of disaster and the downfall of emperors

Despite daily chaos on Earth, 2020 is a big year for Mars exploration. During the once-every-two-year launch window from July to August, when Earth and Mars move into favorable positions, three separate missions have launched to the red planet: UAE’s Hope orbiter, NASA’s Perseverance rover, and China’s first independent Mars mission, the Tianwen-1.

Scientists believe that the study of Mars may hold the key to a brighter future for humanity, space travel, or even space colonization. The red planet, though, hasn’t always been a symbol of hope. While ancient Romans named the planet after the god of war because its rusty red surface resembled blood, the ancient Chinese also believed that the planet would bring trouble, disease, and tragedy.

Ancient Chinese associated Mars with fire, one of the five elements in Daoism, and called it 火星, “Fire Planet,” the name it still holds today. An even older name for the planet was Yinghuo (荧惑), according to Master Lü’s Spring and Autumn Annals (《吕氏春秋》) and the Records of the Grand Historian (《史记》): ying describes the dim, flickering light of a distant fire, while huo indicates confusion and disorder.

China’s first Mars probe, carried by Russian’s Phobos-Grunt mission, was named Yinghuo-1 (萤火一号, “Firefly-1”). The similar pronunciation was a reference to Mars’ ancient Chinese name. Unfortunately, the mission failed to leave Earth’s orbit after launch in 2011, and later crashed into the Pacific Ocean.

Scientists now know about the apparent “retrograde motion” of Mars, when the planet seems to stop and orbit the Sun in the opposite direction relative to Earth. This phenomenon, actually an optical illusion, takes place around once every two years when Earth passes Mars in orbit. For early skywatchers, though, Mars was like a strange wanderer: usually moving eastward, but sometimes seeming to stop and reverse its course. To make things more confusing, the apparent patterns of Mars retrograde are far from fixed.

Ancient Chinese astronomers interpreted this unusual phenomenon as a harbinger of disaster. “Yinghuo forecasts chaos, cruel rebels, disease, death, hunger, and war,” stated the Records of the Grand Historian, written by Sima Qian (司马迁) around the 1st century BCE. “When it moves backward twice and stays unmoved, disaster will strike the state in the direction it travels within three months…If Yinghuo lingers after seven months, the state will fall.”

Yinghuo’s erratic movements were believed to be a punishment from the Heaven, hence Mars’ alternative name, Faxing (罚星), or “Planet of Punishment.” Ancient Chinese emperors, far from being all-powerful feudal rulers, were believed to be checked and held responsible not only by earthly but also heavenly agency.

The position of Mars in the night sky always provided a perfect opportunity for ministers or the populace to direct criticism at the top. “Yinghuo’s appearance represents chaos. [The ruler] should consolidate the army externally, and examine his administration internally,” stated the Records of the Grand Historian. Since the the Han dynasty (202 BCE – 220 CE), emperors even issued public self-criticisms when Mars moved close to significant constellations or stars. 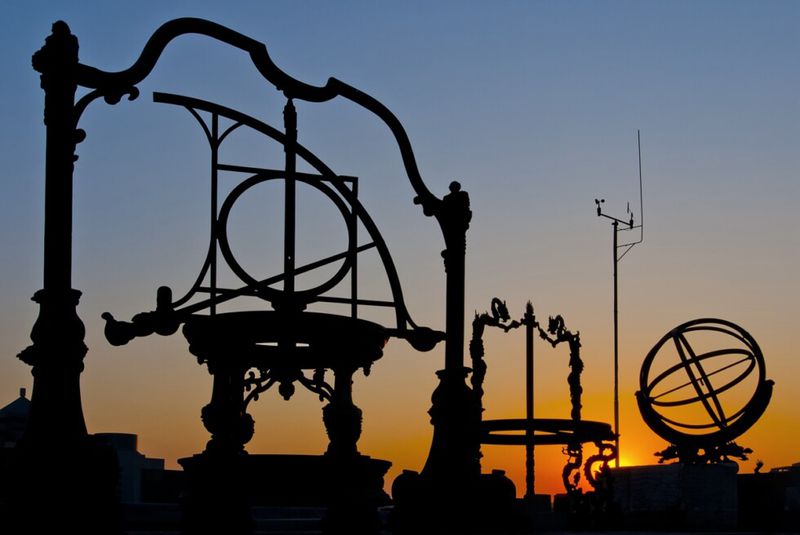 Astronomical instrument on display at the Ancient Observatory in Beijing, first built in 1442 (VCG)

One of the worst readings a Chinese emperor could get from the imperial astrologist was called “荧惑守心,” or “Yinghuo Staying at the Xin constellation.” One of the 28 traditional Chinese constellations, the Xin (“Heart”) constellation partially coincides with Scorpius in Western astronomy. Consisting of three stars, Xin represents the emperor’s ceremonial hall in Heaven, with the brightest star in the middle as the emperor and two stars stars representing two princes by its sides.

When Mars retrograde occurs in the area of the Xin constellation, it was deemed as a portent of critical danger for central powers—namely, a ruler’s death or overthrow. Many cases of “Mars Staying at Xin” were recorded in Chinese history, with varied and intriguing outcomes.

In 480 BCE, Lord Jing of the Song state (宋景公) faced this particular bad omen. His astrologist suggested he could transfer the bad luck to his chancellor, his people, and the harvest that year by performing a sorcery ritual. Lord Jing refused, stating that he would rather die than cause harm to his people. The astrologist then congratulated the lord, for his noble choice had touched Heaven. That very night, Yinghuo moved away from Xin. The story, although essentially a fable, was told in both Records of the Grand Historian and Master Lü’s Spring and Autumn Annals.

Another case, recorded in the Book of Han (《汉书》), occurred in 7 BCE. Emperor Cheng of Han (汉成帝), a notoriously incompetent ruler, faced the same choice as Lord Jing. Emperor Cheng chose to blame his chancellor Zhai Fangjin (翟方进) for mismanaging the state and bringing disaster upon it, and forced Zhai to take his own life. But it seemed that Mars was bent on punishing the emperor after all: He died in less than a month after Zhai.

In these historical fables, Mars appears to be a just and fairly accurate punisher of evil. Ancient historians, though, often fudged the astronomical records for the sake of narrative. Take Emperor Cheng’s case: Taiwanese scholars Zhang Jiafeng and Huang Yinong have calculated that in the year 7 BCE, there wasn’t a case of “Mars Staying at Xin” at all. Cross-referencing historical texts, they proposed that chancellor Zhai was a victim of a political persecution masked as a heavenly disaster.

Scholars Liu Ciyuan and Wu Limin have further collected a total of 25 entries of “Mars Staying at Xin” from official dynastic records, and found that more than half were wrong: either a few years off, miswritten when the records were copied, or completely false. Whether these incorrect records were fabricated for political purposes is still open for debate in academia.

For the ancient Chinese, the observation and interpretation of Mars has been mixed with superstition and political struggles. With today’s technology, though, Mars may finally be able to tell its own story: of its past, its present, and its potential to become a second home for humankind.