Mulan has been a part of my life since I was 3 years old. Growing up as a Chinese American girl in the 1990s, I’d watched Disney’s 1998 animation on VCR so many times that I memorized its musical numbers before my times tables. In elementary school, I dressed up as my favorite Disney “princess” for Halloween, reveling in the fact that she was neither a princess nor needed to be rescued.

Back then, it was a sensation that there was a strong Chinese heroine in mainstream American media, even though the movie never caught on in China for being “too American.” Now, Disney is trying again with Mulan—this time with the challenge of presenting the heroine back to her own culture in a global box office—and fails and succeeds in several important ways.

Directed by Niki Caro, the new Mulan was Disney’s attempt to court the Chinese box office, the second largest in the world in 2019. Disney gave Mulan the highest budget of any film ever directed by a woman, and hired Chinese stars including Liu Yifei (Mulan), Jet Li (the Emperor), Donnie Yen (Commander Tung), Gong Li (Xian Lang), and Tzi Ma (Mulan’s father). It was filmed in China, and the script was even sent to Chinese authorities for approval to ensure that it could be shown in theaters.

The production was Disney’s high-stakes bet that they could tell a story that appealed to a Chinese audience. Since its Chinese release on September 11, that bet has failed to pay off. Mulan garnered only 23.2 million USD in its three-day opening weekend in China, eclipsed by China’s home-grown The Eight Hundred, which grossed 79.6 million USD over its opening weekend just weeks before. The film received a dismal score of 4.9 out of 10 on movie rating platform Douban.

For those rigidly attached to historical consistency, or nostalgic for one’s Disney childhood, the new Hollywood adaptation may disappoint. Nobody bursts into song, and the color palette and mood are distinctly darker than the 1998 version. But Caro’s Mulan offers a new version of a legend that is slightly closer to its traditional Chinese roots, and takes its feminist message to the next level.

It’s not the original sixth century Chinese legend told in “The Ballad of Mulan,” and has marked differences from the cartoon. The folk song’s Mulan goes to war purely out of love for her father, with no dramatic reveal or redemption scene for her gender. Disney’s animated Mulan added the element of self-actualization, as exemplified in the lyrics, “When will my reflection show who I am inside?”

In contrast, the raison d’etre of Caro’s heroine is to live a life that is “loyal, brave, and true,” taking individualism out of her struggle. In this sense, the film cuts closer to traditional Chinese mores. 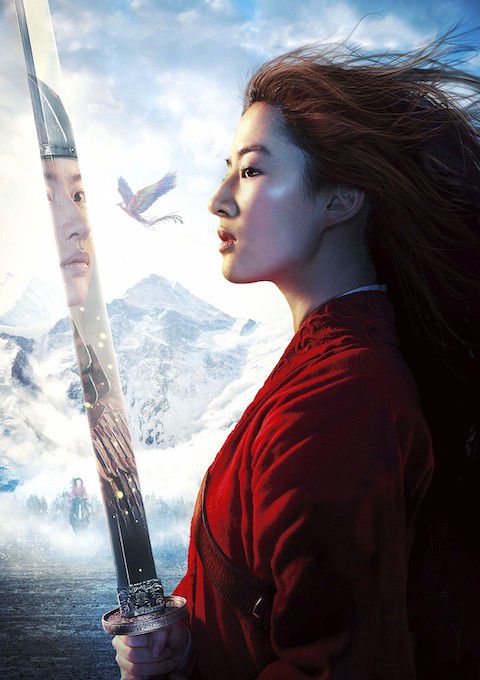 There are moments that clearly distinguish the new Mulan’s hardcore commitment to Confucian ideals from its animated predecessor. When Caro’s Mulan is banished from the army, our heroine barks back, “I’d rather be executed!” This is perhaps inspired by a later Tang dynasty adaptation of the legend, in which Mulan, rather than marry the khan, commits suicide at her father’s grave, swearing her loyalty only to him.

On the other hand, Caro’s Mulan goes on to swear, “I know my place, and it is my duty to fight for the kingdom and protect the emperor.” It is unclear whether the emphasis of loyalty to one’s country and its ruling figure is a cultural concession, or a political one for Chinese authorities today.

Culturally, Caro’s Mulan purged some elements from the 1998 version that wouldn’t fly with a modern Chinese audience, including the ghosts of ancestors playing volleyball with each other’s decapitated heads, and a panda appearing several thousand kilometers from its natural habitat to give Mushu, Mulan’s dragon sidekick, a ride up a tree.

Yet the 2020 production of Mulan employed a director from New Zealand, and none of its four screenwriters are Chinese. Perhaps because of this, the film ended up introducing some new inconsistencies with Chinese history and culture. Mushu as the guardian spirit is replaced by the phoenix, whom Mulan’s father explains has the power of rebirth from ashes. But, although fenghuang (凤凰), the mythical bird translated as “phoenix,” features prominently in Chinese folklore, those attributes originate from ancient Egypt.

The shooting locations in China, albeit beautiful on camera, are famous tourist locations extremely distant from each other. Mulan’s home, a circular residential fortress (tulou in Chinese) traditionally inhabited by the Hakka minority, are in southern Fujian province. From there, Mulan hops on her horse and seemingly teleports thousands of kilometers to the snow-capped mountains of China’s far north to fight. And on the way home, she stops to cry in Zhangye’s Seven-Colored Ridges, way out west.

Although none of Mulan‘s writers were Chinese, three of them were women, and their contribution behind the camera is strongly felt. The film corrects a feminist faux pas from the original Disney version, which includes marriage as part of the happy ending. In the 2020 version, romance takes mostly a backseat, instead the spotlight is on the Chinese concept of filial piety (孝).

The true love story for Caro’s Mulan is respect for herself, love for her family, and love for her fellow soldiers and country—not just a hunk with a nice jawline. Mulan’s romance subplot remains mostly unexplored, and the film instead centers around the relationship between two women: Mulan, and the female villain, Xianniang (Gong Li), who has been spurned by society for being a powerful woman with magical powers. Xianniang is arguably the most complex and compelling role in the film, and she and Mulan fight each other, make sacrifices for each other, and grow from each other.

However, calling Xianniang’s magical powers “qi,” a concept of vital force key to Chinese martial arts and traditional medicine, to allow her to shapeshift into birds and perform telekinesis, deeply confused and offended some Chinese audiences. “I don’t understand why she was in the movie, or what she was doing,” said Mrs. Zhuang, an octogenarian viewer in Beijing. “If you watch it as a completely fictional film, it’s a success. But if you want to say that it’s a combination of fiction and history, it’s still a failure, because too little is true.”

For all its historical and cultural blunders leaving Chinese moviegoers squirming in their seats, the story itself is watchable due to its luscious cinematography, beautiful landscapes, and gorgeous rendition in 3D, befitting of the 200 million USD budget. The acting from Gong Li is so emotive that some wish she were the star of the film, even as they wonder why she is in the story. On the other hand, Liu falls flat on screen, and has been criticized by many Douban movie-goers for her wooden acting.

In the end, it’s natural that a world of global film distribution would turn toward global production. But such a high-profile international collaboration between two powerful countries was a path beset with thorns. Announced in 2010, it took 10 years for the live-action film to come to fruition. The endeavor was full of countless negotiations: for a female director, but not a Chinese one; a message of loyalty to appeal to the Chinese, with just enough hints of the animation’s iconic soundtrack to keep the American audience happy without their favorite dragon sidekick.

Some in the West are boycotting the movie because Liu Yifei’ political stance, while some Chinese swore that they’d support the movie more for it. Four sources alleged to Reuters that Chinese media were instructed not to publicize the movie’s release due to political sensitivities. Some moviegoers feel that it has betrayed the cartoon, while others feel it has betrayed the legend and Chinese history. Finally coming to the silver screen in a time of tense US-China relations, it has not evoked good feelings on either side.