In the summer of 1937, Xie Jinyuan, a military officer in the National Revolutionary Army, wrote to his wife: “I’ve determined to sacrifice myself for my country, seeking no retreat or living in degradation, but instead, our enemy shall pay their price.” Xie would not return from his patriotic but doomed mission in the Battle of Songhu.

Xie’s story, and the heroic last stand of the soldiers he led against the Japanese, is the subject of the much anticipated blockbuster The Eight Hundred. Though delayed from its original summer 2019 release date, first due to alleged censorship and then to Covid-19, the movie made 964 million RMB at the box office as of Tuesday and earned a score of 9.2 out of 10 from viewers on film rating platform Maoyan Movie at the time of writing. The first Chinese production to be shot entirely with Imax digital cameras, and the first big-budget domestic film to hit screens since cinemas reopened, The Eight Hundred has provided a boost to the beleaguered movie industry.

The movie reenacts the true story of Xie (Du Chun) and his ragtag group of 423 soldiers tasked with holding their position at the Sihang Warehouse in the Zhabei district of Shanghai in the face of the Japanese advance. The defenders stayed in place for four days and were eventually able to retreat into Shanghai’s foreign concession with minimal casualties. To intimidate the Japanese, the Chinese Nationalists, or Guomindang (KMT), claimed they had 800 troops in the warehouse, hence their moniker “800 heroes.” 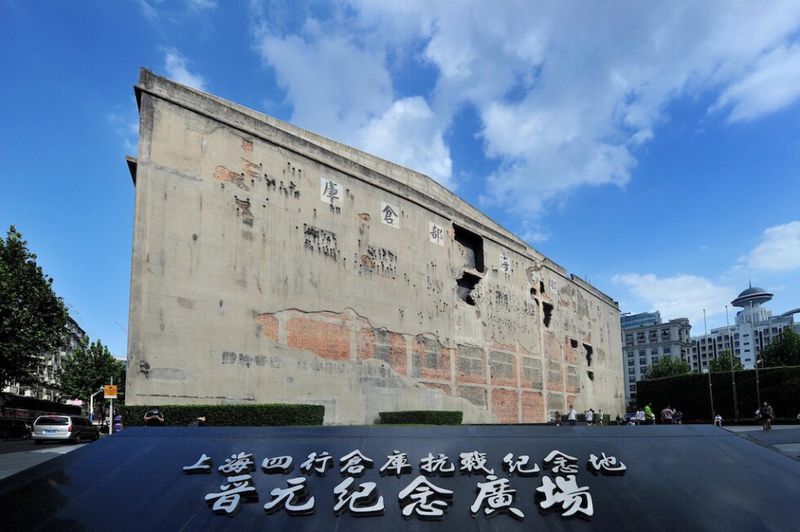 The Sihang Warehouse, now a museum, has seen its average daily visitor numbers double since the release of the film (VCG)

The Sihang Warehouse, which is still standing today, backed onto Shanghai’s International Concession, which was neutral territory in 1937. There, foreign residents continued to enjoy their lavish lifestyles as the city burned around them. “One side is heaven, and the other is hell,” soldier Xiao Qiyue (Zhang Youhao) quips in the film as scenes of song, dance, and gambling in the concession interweave with shots of ruins on the battleground.

Unlike other Chinese war films that generally emphasize the role of the Communist army and play up the deeds of famous generals, director Guan Hu focuses on telling stories of average KMT soldiers. This does not mean the movie lacks patriotic bombast. In one scene, Chen Shusheng (Zheng Kai) bravely jumps from a building in a suicide attack on a Japanese armored division, leaving with the words, “I’m willing to sacrifice myself for the country.” Yang Huimin (Tang Yixin), a 15-year-old cadet, risks her life to escort the Republic of China’s flag to the survivors in order to boost their morale. Rarely have Chinese screens depicted the raising of the Nationalist flag, which is still associated with Taiwan today, and the film’s positive depiction of KMT soldiers has won it praise from some viewers.

Not all soldiers who end up defending the warehouse are heroic to start with. The canny Lao Suanpan (Zhang Yi) and deserter Ti Laotie (Jiang Wu) face internal struggles about whether to run and save themselves or stay and face the enemy. Eventually they rally around the cause after witnessing the selflessness of their fellow troops. Duan Wu (Ou Hao), a peasant who came to Shanghai for a taste of city life, finally sacrifices himself to protect the KMT flag as it is attacked by Japanese bombers. 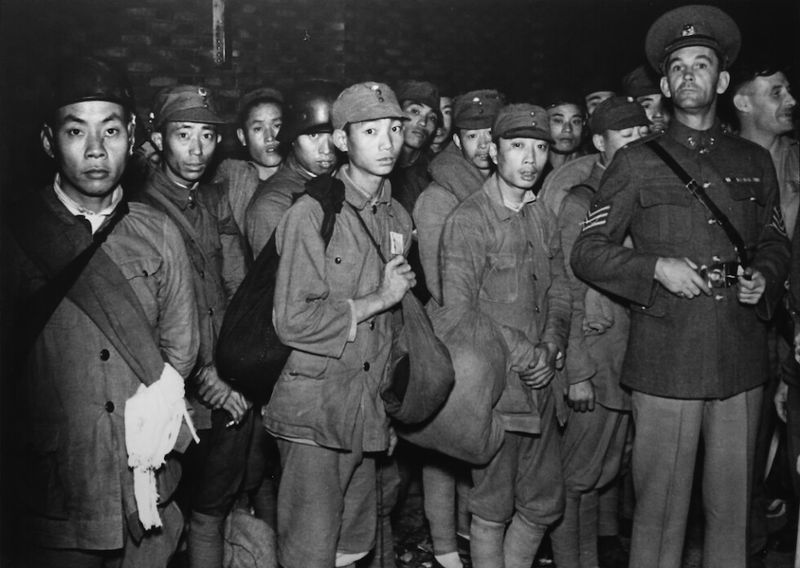 Survivors retreating from the Sihang Warehouse in 1937 (VCG)

In real life, the nearly three-month-long battle for Shanghai saw 300,000 Chinese casualties and 40,000 Japanese. The end result was a crushing defeat for the Nationalists, with up to 60 percent of its best troops annihilated, and its naval force completely destroyed. But the battle brought China’s struggle against the Japanese to international attention, not least because the defense of Sihang Warehouse took place in plain sight of the international settlement. It also showed that China would not simply roll over and let the Japanese forces take over, fracturing the illusion both in Japan and abroad that China would fall in a matter of months.

Not all have praised The Eight Hundred’s portrayal of history. “I think the film is excessively sensationalist,” one netizen commented on Douban, where the movie is rated a slightly less impressive 7.8 out of 10. Many Douban users also complained about the hasty ending, which didn’t tell the story of how the surviving troops were made to surrender their weapons and placed under house arrest in the International Concession. In the film, the survivors are gunned down by Japanese fighters as they stand atop the warehouse, but in reality most of the over 300 remaining troops were able to retreat into the international settlement.

Still, the movie is unique for its portrayal of Nationalist heroism at a time when media control seems to be growing tighter. It would be interesting to know what exactly was changed between the original 2019 release date and the version in theaters now, but with the movie industry on its knees and no domestic releases for months, beggars can’t be choosers.

Cover image of the Battle of Songhu from VCG