The first time Han director Wang Lina laid eyes on Isa Yasan, the Uyghur boy was nursing a frightened lamb with a milk bottle. To calm the beast, Isa laid a kiss on its furry head—a tender act which Wang recreates for the opening scene of her debut film, with Isa playing himself in a script based on his own life.

The child actors “had to be real, and other than that, there wasn’t really any casting method,” recalled Wang in an interview with online magazine Asian Movie Pulse. She had come to Isa’s home after reading one of his school essays, in which he wrote of his love for his mother, who is deaf and mute. The boy’s devotion shines through on screen as he combs his mother’s hair, whispering to her under his breath with gutting gentleness—and he isn’t acting.

Set in Wang’s native Xinjiang, A First Farewell depicts a Uyghur community on the edge of the Taklamakan Desert where age-old lifestyles are challenged by urbanization and modernization. The rich colors, patterns, and soundtrack draw from Wang’s own childhood in Shaya county, as well as a year-and-a-half of field research and documentary filming in the area.

The film is not simply an elegy to childhood; larger forces are at play in the story and in the world, inflicting the types of wounds from which maturity oozes as an inevitable salve. Isa’s mother is sent to a care home; his brother Musa (Musa Yasan) leaves for college; Isa’s best friend Kalbinur (Kalbinur Rahmati) moves to attend a Mandarin school in the city. Caught in the winds of social and economic change, Isa’s family and neighbors negotiate visions of a better future based on whispers of a different life “out there.”

Yet just as the innocence of children cannot survive life’s barrage of aches, Farewell does not float above the spiritually compromising tides of politics. Wang has created a movie like an 86-minute Rorschach test: everybody seems to see what they want to see. For Hollywood Reporter’s Hong Kong-based film critic Clarence Tsui, the movie depicts the pressure on ethnic minorities “to ditch their own culture and conform”; the New York-based indie film review website Supamodu even goes so far as to call the film a “eulogy for the Uyghur world.”

Within China, the movie struck a different chord. The state-run China News Service applauded the movie as “a chance for viewers from different regions to empathize with each other.” Users on film reviewing app Douban raved that “it’s beautiful and rare” to watch Uyghur children and Xinjiang depicted on the big screen. Funded by internet giant Tencent and the state-owned Emei Film Group, the film won the Asian Future award at the Tokyo International Film Festival 2018, and the Grand Prix of the Generation Kplus section at the 2019 Berlinale. It also was chosen as the first new feature film to be shown in theaters across China after months of closure due to Covid-19.

Although Wang has claimed that “humanity is my hometown,” one wonders if the film’s tone would have been different coming from a Uyghur director. Nevertheless, Farewell is among the first major films to humanize an ethnic group that some still associate with well-publicized stabbings at a Kunming train station in 2014.

The film truly stretches itself to project an image of multiethnic harmony and a benevolent, paternalistic government. Some of these overwrought scenes come off flat, and the dialogue feels forced at times. When Isa’s aunt objects to the family’s decision to send Isa’s mother to a nursing home, a family member reminds her, “The government is our father, too. You should agree.” Another adds, “I saw on TV that they take care of those in need.”

Education, and especially proficiency in Mandarin, is shown as a portal to future economic success. When Kalbinur scores 60 in math but only 20.5 in Mandarin, her teacher scolds her. Kalbinur’s mother mutters to her husband as they pick cotton flowers, “Look what [our neighbor] Niyaz does. He takes his kids to learn from the Han neighbors. You could cover a wall with all their awards.”

In another scene, Musa gives parting advice to Isa before leaving for university: “Wash your face more often. Be neat. You should act more educated.” One audience may see an internalized sense of shame, a successful colonization of values, and the desire to assimilate. Another sees a touching sign of social mobility and growing access to higher education among China’s rural poor.

At school, Isa and his classmates recite famous Tang poetry. The scene is instantly relatable to Chinese who grew up memorizing the same poems, reinforcing the idea that Uyghur children are “one of us.” During a morning assembly, lines of students pledge to “be a good student and a good citizen, never forgetting our country, and be thankful for our upbringing.”

Sometimes the injection of politics is so haphazard that one wonders if it is purposely over-the-top. One morning, as Kalbinur slurps noodles and her mother busies with preparing the kids for school, the Chinese national anthem plays muffled in the background, jarringly disembodied from the story and plot. The source of the song is never explained—is it a loudspeaker on the street? A radio?

Wang resists politicized interpretations of her film, stating in interviews that her goal is purely arthouse: to “see the poetic nature of everyday things, to break through that barrier of linear thinking and revive the subtleties, the complexities, and the true meanings in life.” She quotes the Kyrgyzstan writer Chingiz Aitmatov that one must avoid “oppositions between the natural and civilized,” concluding, “I think it’s important to view people and the world this way.”

Spring comes, the clouds are still high in the desert sky, and Isa continues to herd his sheep over the hills. The story ends more or less as it begins, but with a few more shadows adrift over Isa’s heart. Wang paints a colorful cinematic window into one of China’s most vulnerable minorities, representing diversity of ethnic culture on screen—but falling short of a deeper diversity of views. 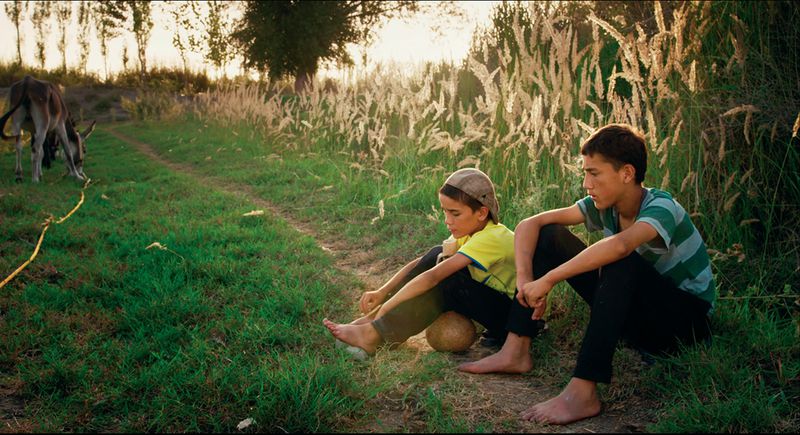 Kalbinur: Can we take Isa too? And all my friends?

Kalbinur’s mother: No. Everyone has to learn how to say goodbye. No two people can always stay together.

Dwelling in the Fuchun Mountains

In the historic town of Fuyang, Zhejiang, known for its natural beauty, four brothers struggle to take care of their 70-year-old mother, who suffers from dementia. Meanwhile, they deal with issues in their own families. Long shots sweep over lush trees and emerald green Fuchun River, casting a sharp contrast with the family’s hardships and the relentless urbanization imposed on the old town. The aesthetics of the film are inspired by traditional Chinese scroll paintings. Spanning over four seasons marked by iconic sceneries, the family goes through tension and breakup, until healing starts in spring. – Liu Jue (刘珏)

A magical hibiscus blooms only in pure hearts, but corrupts those around it, causing entire villages to descend into wickedness and materialism. In this animation aimed at adults, Ding Guo and a cast of wandering martial artists seek to destroy the flower in order to save their society—but at the cost of sacrificing the lives of the innocent. A colorful fantasy and adventure flick with a heavy moral backbone, this debut film of director Li Lingxiao has drawn praise for its meditations on human nature as well as its distinctly Chinese animation aesthetic. – T. X.

The Qius are your typical old Beijing family. Two brothers and their single father live in a hutong courtyard crammed in with several other families, eating zhajiang noodles for dinner while listening to crosstalk on the radio. Old Qiu (Zhao Yanguozhang) is a taxi driver estranged from his troubled younger son, a high school senior who often skips classes to play video games. When Old Qiu suddenly fell ill, his older son, Qiu Lei (Gao Wei) has to step up and take care of the family, but his younger brother just keeps stirring up trouble. Though the plot doesn’t offer much in terms of surprises, the vivid depiction of characters in the hutong and the warm bonds of kinship will certainly move the audience. – L. J.

A First Farewell is a story from our issue, “Disaster Warning.” To read the entire issue, become a subscriber and receive the full magazine. Alternatively, you can purchase the digital version from the App Store.