Ms. Liu surveys what was once a patch of farmland full of sprouting corn, but now resembles a lake. “All the seeds we planted have been submerged…the crops have all been soaked rotten in the fields,” she complains. “It will be very difficult to have a good harvest.”

Liu is one of around 60 million people across China who have been affected by abnormally heavy floods this summer. June saw the largest amount of rainfall since 1961 in the Yangtze River Basin, an area home to over 400 million people and 40 percent of China’s GDP. Across the country, 219 people are dead or missing, and over 4 million have been forced to leave their homes.

Floods aren’t uncommon in Liu’s village in Wuwei, Anhui province, but this year there is palpably more fear in the air. “The water level has been rising like crazy,” says Liu, who has been told by local authorities to move what belongings she can to the second floor of her house, then evacuate to a nearby primary school. “The families here have gone to look at the embankment every day. We’re afraid it will break, then the whole village will be submerged.” Heavy downpours known as the “plum rain” visit China’s southern regions each summer, often breaching the dikes and embankments of the Yangtze River, one of China’s major waterways. This year’s inundations, though, are perhaps the worst since 1998, when over 4,000 were killed across the country.

From 1985 to 2018, flooding caused an average 19.2 billion dollars of damage per year in China, and more than 33,000 deaths over roughly the same period. In 1931, 140,000 drowned and 2 million died from subsequent famines and disease epidemics after Wuhan was inundated due to severe storms.

Floods have been recorded ever since settlements first emerged along the Yellow River in northern China. Part of the founding myth of Chinese civilization is the story of Yu the Great, a king who united the realm over 4,000 years ago by taming the waterways of China’s heartland.

Successive dynasties have sought to harness the rivers that feed China’s fertile hinterland, but also cause devastating flooding. According to research by Liu Zhenhua at Zhejiang University of Water Resources and Electric Power, between 206 BCE and 1936, there were 1,037 major flood disasters in China, or one every 2.07 years.

Archeological evidence suggests that in the 16th century BCE, the Shang dynasty moved its capital at least once due to catastrophic flooding. Kaifeng, located on the Yellow River and the capital of the Northern Song dynasty (960 – 1127), has suffered seven devastating floods since the fourth century, with a new city built on top of the ruins each time.

Floods have even been weaponized: In 1128, Southern Song troops broke levees on the Yellow River in an attempt to slow down the advancing Jurchen army, and in 1938, Nationalist leader Chiang Kai-shek tried a similar tactic against the invading Japanese, killing hundreds of thousands of civilians and creating millions of refugees. In 1931, the streets of Wuhan were turned into canals by relentless rain

The Yangtze River has wreaked similar havoc throughout history. Flooding on the river had increased in frequency since the Tang dynasty (618 – 907), when floods were recorded once every 18 years, to once every three years during the 20th century. Though flooding on the Yangtze has only been recorded in detail since 1153, officials noted 54 severe floods in the river’s middle basin during the Ming and Qing dynasties (1368 – 1911).

Fighting the floods has been a key occupation of rulers ever since the mythical Yu. The irrigation system at Dujiangyan, Sichuan province, was completed in 251 BCE and has been credited with preventing flooding and ensuring adequate water for farming in the Chengdu Plain ever since.

In 1565, an official named Pan Jixun advocated a system of building embankments to prevent breaches and changes in the Yellow River’s course. Those tactics of building ever more, larger, and stronger dikes, levees, and embankments persisted for centuries.

But the system proved unsustainable. During the late Qing dynasty (1616 – 1911), the state paid up to 15 percent of the annual national revenue to protect ever-more valuable land from flooding—a situation that the ailing regime, threatened by internal strife and foreign powers, could not sustain.

The Mao era continued the obsession with large engineering projects. The 1950s saw a frantic campaign to construct dams. In 1952, under Mao’s proclamation “For the great benefit of the people, be victorious in the construction of the flood diversion,” around 300,000 workers completed a flood defense project in Hubei province in just 75 days. They built a series of flood diversion areas and constructed numerous sluice gates to drain water away from densely populated areas.

But these projects were unable to prevent flooding in 1954, and when authorities opened the sluice gates that year, they flooded and devastated thousands of hectares of agricultural land and villages in order to save the cities. In 1975, the Banqiao Dam, completed in 1952 on the Ru River in Henan province, collapsed along with 61 other smaller dams during a typhoon. This released 6 billion cubic meters of water into an area of about 10,000 square kilometers, killing up to 230,000 and sending 40,000 PLA troops into the area for disaster relief.

During these floods, volunteers were sent to repair dikes and to provide flood relief. Over 7,500 workers were sent to bolster the defenses in Wuhan in the summer of 1954.

He Xianhua, a shopkeeper and flood inspection volunteer from Wuwei, remembers working to combat flooding in those times: “In the 70s we went to the Yangtze River to fight the floods. We used poles to carry mud to reinforce the embankment on the river bank. At that time, basically every young person in Wuwei went.”

Today, Mr. He is again tasked with checking water levels and flood defenses in his village. “Sometimes I spend the night [at the flood control station]. You can say I’m on 24-hour duty; at 3 in the morning I get up to check the water level, note it down, and report it.”

The 1998 floods were particularly devastating, and marked a watershed moment in China’s approach to flood management. In Jiujiang, Jiangxi province, a dam collapsed apparently because the concrete walls had no reinforcing steel bars inside. When Premier Zhu Rongji visited the dam site, he lambasted local officials through a loudspeaker: “How can you come up with such a shabby, son-of-a-bitch project? How can you be corrupt to such a degree?”

Corruption and shoddy construction continued to plague flood defense projects. In 2008, Zhang Jianhui, the head of Nanning’s water conservation department, was convicted of taking bribes totaling 26 million RMB over 8 years. In 2011, it emerged that officials in Jingdezhen had spent much of a 300 million RMB flood defense budget on city landscaping instead. 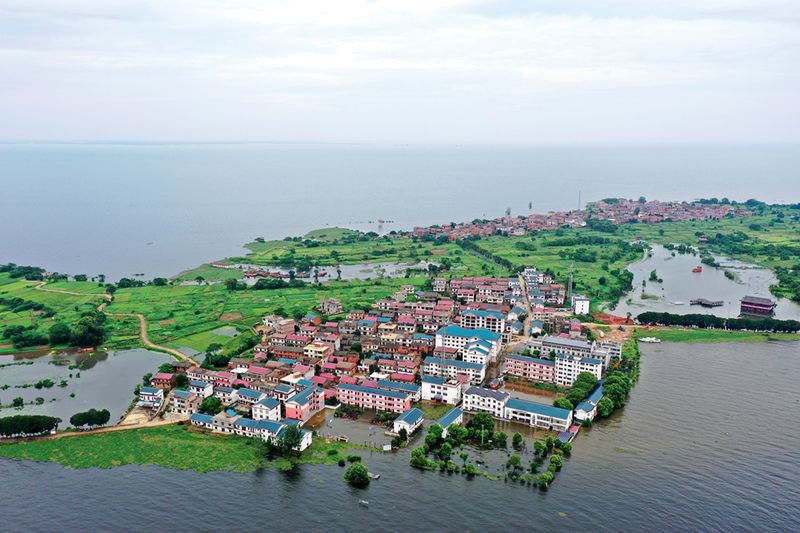 Meanwhile, China’s strategy is changing. “China’s leaders have already realized that China’s flood prevention measures are unfavorable for sustainable development,” says a professor formerly at the Nanjing University School of Geographic and Oceanographic Studies, who wanted to remain anonymous. Future flood management plans should “comply with nature,” she argues.

After the 1998 floods, which cost China nearly 3 percent of its GDP, the government developed a 30-year plan for flood defense that included restoring 14,000 square kilometers of natural wetlands, relocating 2.4 million people away from floodplains, and mass reforestation. The National Climate Change Program has promoted the conversion of farmland back into rivers or lakes, removing some dikes, and dredging rivers where sediment had built up.

These measures tacitly recognized that human activities had contributed to increased flood risks. “Ancient people didn’t have the ability to use massive ‘hard’ engineering projects for flood prevention, so they had to think of measures to suit local conditions; these river management measures were more friendly to the environment,” says the professor. “People nowadays can draw lots of lessons from flood prevention measures throughout history.”

The new strategy may be working. Though the Yangtze rose above 1998 levels this year, there have been far fewer casualties. The death rate this year is more than 50 percent lower than the previous five-year average, and the number of houses destroyed 68.4 percent lower, according to the Ministry of Emergency Management.

Still, affected residents worry about rebuilding their lives once the flood water recedes. In Wuwei, “at the moment, [the authorities] haven’t said if there will definitely be compensation,” says Liu, who has lost 4,000 square meters’ worth of crops and numerous chickens.

Furthermore, climate change is likely to increase the risk of flooding in the future. A joint Oxford-Harvard study estimated that economic losses due to flooding in China could rise by 82 percent in the next 20 years. And the number of Chinese living on floodplains is actually increasing, amounting to 453.3 million as of 2015. “As long as you develop flood plains, there will be a risk of flooding. Any flood prevention project, including those that are based on nature, can only reduce the risk; it can’t eliminate it,” says the Nanjing professor.

Moving away may be the only option to guarantee safety, but most are unwilling. “We’ve already lived here for decades,” says Liu. “I’ll think about it if it happens again. But I hope there isn’t a next time.”

Testing the Waters is a story from our issue, “Disaster Warning.” To read the entire issue, become a subscriber and receive the full magazine. Alternatively, you can purchase the digital version from the App Store.

Tags:
HEAVY FLOODS AND DOWNPOURS FLOODS IN HISTORY DAMAGE OF THE FLOOD TO THE CHINESE ECONOMY CHINA'S HISTORY IN PREVENTING AND CONTROLLING THE FLOOD
SHARE: