When 39-year-old Mose Erti first saw young people in his village holding selfie sticks and gesticulating wildly at their phones, he thought they looked like lunatics.

It was incomprehensible to villagers of his age that people could earn money just talking nonstop at an invisible audience. “How can they have so much to say?” he mused to Beijing Youth Daily in 2018.

“Good morning, sisters and brothers! Today Wu Da is carrying a 50-kilogram bag of rice and oil up the mountain,” the young man yelled into the camera, his face dripping with sweat.

He gripped the railing of a steel staircase in one hand and a selfie stick in another, so that his 1.2 million followers on the video streaming app Kuaishou would not miss witnessing his vertiginous climb up the 800-meter cliff. “It’s really heavy. Hope you give Wu Da a double heart and star, and follow me! Thanks for your support!”

Just four years ago, the closest distance between Atulie’er village and the online world was an internet café 70 kilometers away. There was no mobile network coverage in the village, and few residents had a phone, except members of the village committee. 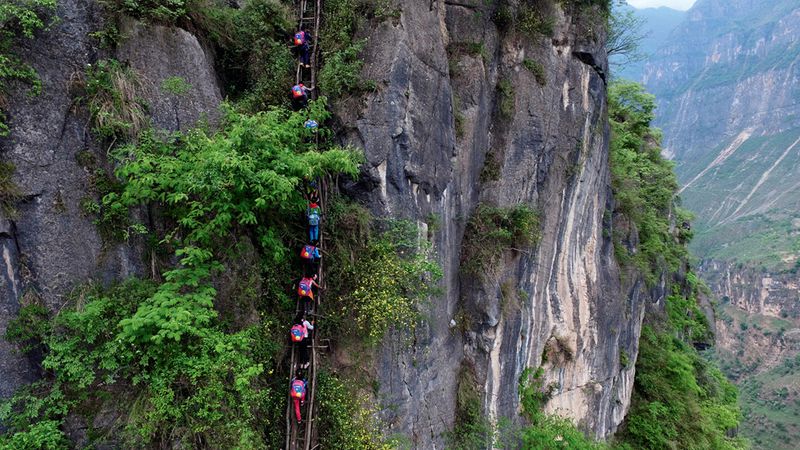 Yet by the beginning of 2020, over 180 people in a village of 500 had made accounts on livestreaming platforms Douyin and Kuaishou with the word “Cliff Village” in their usernames, showing the world their lives at 2,500 meters above sea level in the mountains of the Liangshan Yi Autonomous Prefecture.

The village in Sichuan province first rose to internet fame due to a viral video in 2016 that showed 15 children going to and from school via ladders made of vines, their backpacks strung together with rope for safety as they edged up the sheer cliff. The video shocked millions of viewers, and even President Xi Jinping, before a full assembly of the nation’s leaders at China’s congressional meeting in 2017, said it “made the heart heavy.”

The theme of President Xi’s speech was China’s poverty alleviation campaign, which aimed to lift 70 million out of poverty by the end of 2020. “Cliff Village” quickly became the campaign’s poster child, as a mountainous and isolated part of the country that symbolized a “last frontier” for poverty alleviation. From 2012 to 2020, Sichuan’s investment in transportation infrastructure exceeded 100 billion RMB for nine consecutive years in the final push to connect every last village to a road.

With all eyes on “Cliff Village,” changes came swiftly. The town built a steel ladder to replace the one made of vines in 2016, and erected a cell tower in 2017. The arrival of these physical and digital channels to the outside world transformed village life indelibly.

When the cell tower was completed in 2017, 22-year-old Mose Labo, who was part of the ladder’s construction team, bought a smartphone and asked a friend how to upload videos. He started to shoot gravity-defying footage of himself leaping across steel railings and walking across suspension bridges, becoming known as the “Cliff Village Flying Man.” 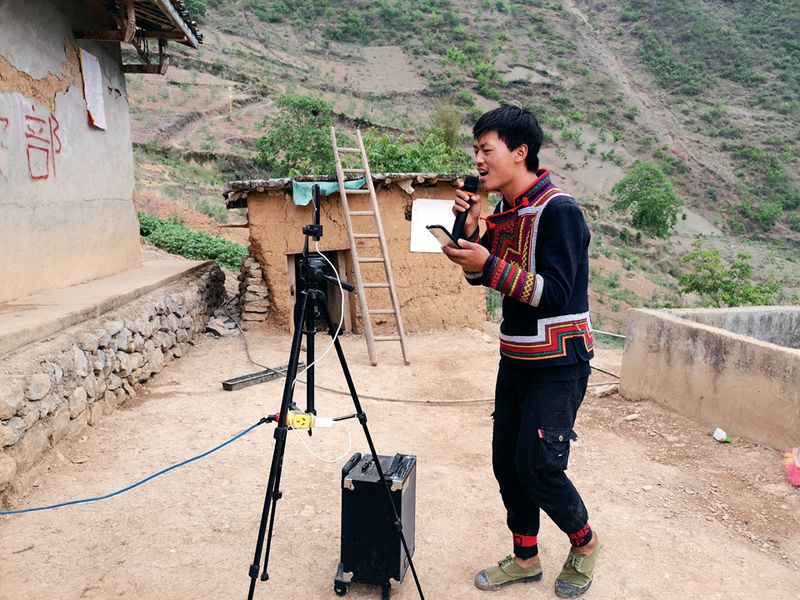 Mose Laji livestreams from his yard in traditional Yi costume

Gaining 126,000 followers in five months, Labo soon discovered that one video could earn him between a few dozen to 500 RMB in donations from fans, credited to his user account and redeemable through WeChat. Previously, his income from farming was less than 1,000 RMB a month.

Many households have eagerly bought smartphones and internet routers. “The elderly people love our internet routers very much. Many covered theirs with a thick cloth to protect it from dust and mice. We had to advise them to remove the covering, as it interfered with the signal,” Mose Erti told Beijing Youth Daily in 2018. “Young people would hold their phones day and night and refuse to leave it, watching videos and chatting.”

However, Mose Erti recounted, the transition was not without rough patches. Unaware of the difference between Wi-Fi and mobile data, many families racked up phone bills of up to 3,000 RMB in the first month, far surpassing the 100 RMB monthly stipend they received under the poverty alleviation project (the village leaders negotiated with the phone companies to drop the charges).

Yang Yang notes that interactions with those outside “have brought big changes in customs in the village. During my broadcast, some netizens asked why we squat when we eat,” he told Beijing News in 2017. “Now, many people in the village have begun to sit and eat.” 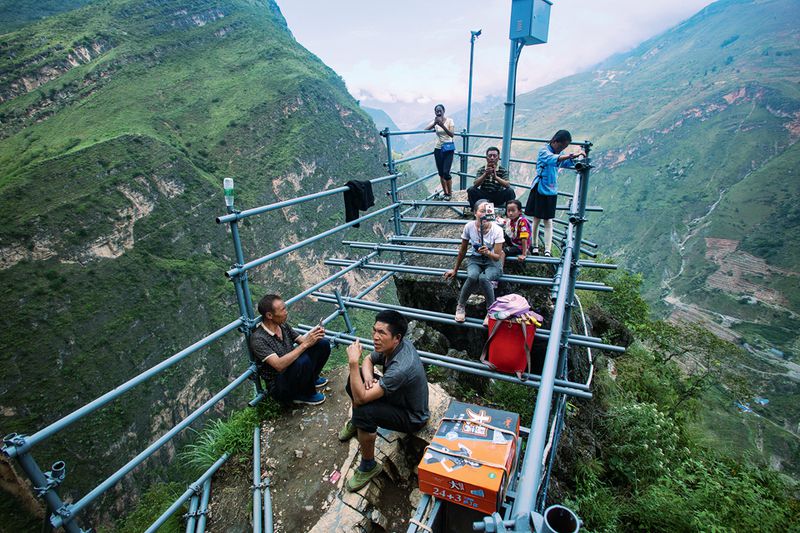 Ah Niu, an Atulie’er resident with 190,000 followers on Douyin, told TWOC that he is the owner of his village’s first dining table, a gift from a netizen who watched his videos last year. The wooden table was shipped to the nearest town, where Ah Niu picked it up and carried it up the mountain on his back.

He has since also paved the dirt floor of his home with cement, and strung flowered cloths to decorate the walls that hang with the backpacks of his four children. “Before, we could only guarantee that we weren’t hungry,” said Ah Niu.

Chen Guji, a 39-year-old collector of wild honey, took to livestreaming in 2018. Selling his honey at 300 RMB per kilogram, he made 7,500 RMB in his first year, and celebrated by slaughtering a 50-kilogram pig for the Yi New Year to share with his family and neighbors.

The pace of change has created a gulf between those fluent in Mandarin, and those who aren’t. On the way up the mountain, a 24-year-old man named Qiongtie told TWOC in broken Mandarin that he is unable to livestream because he can’t read, and doesn’t have the money to buy a smartphone. Instead, he can make 150 RMB a day carrying baggage up for tourists.

Ah Niu, though, pointed out that he only attended school until the second grade. He posts videos by memorizing the buttons, and chats with his followers using voice messaging and speech-to-text functions within the livestreaming app.

Not all of Cliff Village’s residents look positively on the new trend. “Every young person in the village is doing it,” said Lao Ma, livestreamer Wu Da’s uncle. “But 50-year-olds like me,” he clucks to TWOC, “are too attached to our dignity to act like that in front of a camera.” 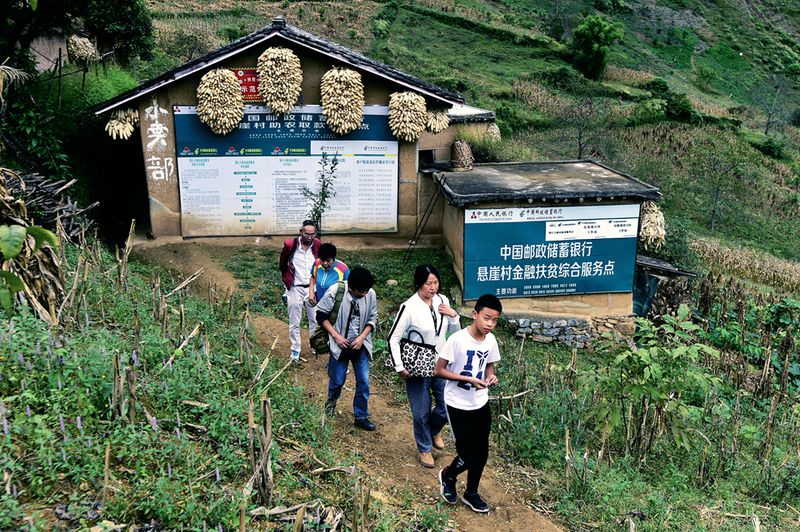 Tourism has doubled the income of some villagers, who serve as guides and homestay hosts

Village doctor Hailai Jiji was even more critical. “To display your suffering to others and elicit their sympathy is very bad,” he told Xinhua News in July. He surmises that audiences may eventually tire of watching young people in the village eat potatoes and climb the ladder, and young people should instead pursue skills or knowledge that can lead to reliable work.

Lao Ma relocated to the base of the mountain 20 years ago, and this year moved into a modern apartment subsidized by the government through the poverty alleviation project. His grandchildren have come down from Cliff Village to attend school, which he hopes will afford them more choices in the future than farming—or livestreaming.

The blogger Peigen insisted in his 2019 vlog “Around China in Ten Years” that “what people in Liangshan need is not injections of money, but education.” He notes there are villages in similar conditions near Atulie’er that cannot rely on internet fame to improve their living standards.

As the poverty alleviation program heads into its last months, livestreamers in Liangshan now face new challenges and divergent fates. Many villagers, including the 84 households officially designated as “impoverished households,” have been relocated by the government to homes below the mountain.

On May 3, Labo livestreamed his departure from Cliff Village into a furnished, 100-square-meter apartment in Zhaojue county seat. Through his lens, lines of villagers descended the steel ladder with bags and baskets for the last time.

Without fields to cultivate, and often without Mandarin and other marketable skills, many relocated villagers have struggled to find a job in town. Thanks to Labo’s numerous interviews on TV from his livestreaming career, though, he has been singled out for a contract with a tourism company.

Some, like Yang Yang, have chosen to stay behind. While many fans comment on his videos that life on the mountain is “too poor” and encourage him to move, he tells media that he hopes to one day open an inn in the village to share with visitors the life and culture of his community.

In the meantime, he continues to promote local products through the screen of his phone. People livestream because they “simply want to showcase themselves,” he told Beijing News. “Some tell jokes, some are cooking. I also want to try and show our mountain because it is beautiful.”

“Live from Liangshan” is a story from our issue, “Rural Rising”. To read the entire issue, become a subscriber and receive the full magazine. Alternatively, you can purchase the digital version from the iTunes Store. Young curators talk to TWOC about transcending stereotypes through art