Tai chi master Ma Baoguo was not a gracious loser. After a match in May 2020, while nursing a black eye after receiving three knockdowns in 30 seconds against an amateur opponent, Ma gave an interview in which he questioned his younger challenger’s virtue: “Young people don’t care about martial ethics. They bully a 69-year-old comrade like me.”

The phrase then went viral online, with Ma’s use of the word 武德 (wǔdé, martial ethics) drawing ridicule from netizens due to the sharp contrast between Ma’s feeble excuse for defeat and the ancient origin of the word in kung fu ethics. Memes and spoof edits of Ma’s videos spread across Bilibili and other online platforms, eventually leading Ma announce via Weibo that he was leaving the world of martial arts for good.

His phrase “Not caring about martial ethics (不讲武德)” lives on, though, with netizens applying it to all manner of news and topics online, to refer to people who resort to tricks or cunning instead of a fair-and-square approach to win a competition.

First appearing in The Commentary of Zuo in the Spring and Autumn period (770 – 476 BCE), wude governed the interactions and behaviors of China’s elite for thousands of years. It emphasizes cultivating a compassionate attitude that transforms an act of violence into a gesture of peace. Fighters with wude are bound to assist the weak, curb the strong, and care for the young, the elderly, and the disadvantaged.

Embedded in this morality are also the Confucian value of 仁 (rén, benevolence) and other positive traits like humility, respect, righteousness, trust, and loyalty. Martial arts practitioners in ancient China attached great importance to internal traits such as will, perseverance, endurance, courage, and patience, instead of just exchanging fists. To follow wude, one must learn the virtue before learning combat skills, and avoid tricks and underhand tactics in a fight.

Chinese history valorized those who followed wude to even to the cost of victory or their own life. Duke Xiang (宋襄公), the leader of the state of Song in the Spring and Autumn period (770 – 476 BCE), was famous for his refusal to attack the wounded, capture the old, or launch an offensive against enemy troops before they’ve finished lining up. When the death of Duke Huan (齐桓公) in neighboring Qi state started a violent succession crisis, Duke Xiang first helped install a new ruler of Qi, Duke Xiao (齐孝公), before going on to start a war with another state, Chu.

Another tale of Duke Xiang’s virtue has to do with a war he waged against the state of Zheng in 638 BCE. Zheng brought reinforcements from the the state of Chu, which had much stronger and better prepared troops than Duke Xiang, but they had to cross the Hongshui River before attacking. One military officer of under Duke Xiang suggested they launch a surprise offensive while the enemy was crossing the river, but Duke Xiang flatly refused. Instead, he waited for the Chu forces to cross safely before engaging them in battle.

Unfortunately, Duke Xiang’s troops were defeated and he was badly hurt. He died the following year. Yet despite his utter failure at expanding his state, Duke Xiang is considered to be one of the renowned “Five Hegemons of the Spring and Autumn Period (春秋五霸)” by some historians for his strong adherence to wude and ren principles.

However, not everyone adhered to these codes of conduct in history. Before Ma Baoguo made the phrase famous, many other historical figures were accused of flouting martial ethics to get ahead. 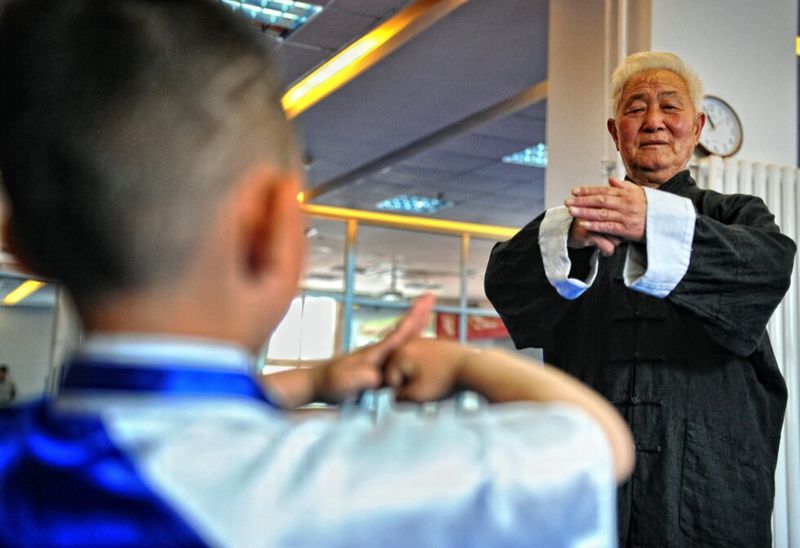 A figure famous for his serious lack of wude is Li Gui (李轨), a general who lived during the seventh century. At start of the Tang dynasty (618 – 907), Li Yuan (李渊), the founding emperor of the Tang, sought to form an alliance with Li Gui, who held great influence in the western regions of the empire. Since they shared a surname, Li Yuan sent a message to Li referring to him as “Younger Cousin.” in response, Li Gui sent his own brother to the Tang capital of Chang’an to meet with the Emperor.

Thinking the alliance was sealed, Emperor Gaozu sent an official to commission Li Gui as Prince of Liang, giving him command over the Liang prefecture. But before the emissary arrived, Li Gui had stabbed the Tang in the back and declared himself emperor of the Hexi Liang state in the winter of 618. Emperor Gaozu was furious—“How dare Li Gui ignore martial virtue!” he cried, according to legends.

Not that Emperor Gaozu was himself a paragon of wude—deciding to fight fire with fire, he sent an official who pretended to surrender to Li Gui, but who instead started an insurrection in the Liang capital at Wuwei, today’s Gansu province. Li was overthrown, handed over to the Emperor Gaozu, and executed.

Even some famous figures who have made great contributions in Chinese history reached their goals at the expense of martial virtue. Zhao Kuangyin (赵匡胤), the founder and first emperor of the Song dynasty (960 – 1279), came to power by staging a coup against the Later Zhou dynasty (951 – 960) with the help of many military generals. Though he is well known for ending the era of warlords and bringing peace to people at that time, Zhao ignored the laws of martial virtue to weaken the power of those allies after he became emperor. At a lavish banquet, he cautioned those generals not to let over-ambitious soldiers “push” them to rebel, then promised they would enjoy high positions and great wealth as long as they accepted his offer to retire. None of the terrified generals refused his terms.

Emperor Gaozu’s son Li Shimin (李世民), later known as Emperor Taizong of Tang, is typically considered as one of the greatest rulers in China’s history, having presided over a golden age when China enjoyed great economic and military might at home and on the Silk Roads. Yet the emperor left martial ethics far behind to claim the throne from his older brother, Li Jiancheng (李建成). In what became known as the Xuanwu Gate Incident (玄武门之变) in 626, Li Shimin ambushed and asssassinated both his older brother and younger brother on their way to see their father, then demanded that his father make him crown prince. Later, he forced his father to abdicate in his favor, and replaced his father’s era name, which was coincidentally also 武德, with his own, 贞观 (zhēnguān, “right view”).

Emperor Taizong of the Tang dynasty is considered to be one of the greatest figures in Chinese history, despite his lack of wude (VCG)

Wude is still sometimes invoked today. Besides the Ma Baoguo incident, it has been used in reference to the finale of Everybody Stand By, a hit reality show in which four directors audition actors to play roles in their new TV drama or film. Allegedly, the directors had all agreed to make their remarks about the opposing teams friendly and constructive, yet in the final episode, director Guo Jingming suddenly turned his back on director Er Dongshen (Derek Tung-Shing Yee) after a performance by Er’s team. Er then vented his anger about Guo’s rudeness, leading his supporters to criticize Guo (who has also been found guilty of plagiarism in the past) for “lacking martial virtue (缺武德).”

As these stories show, wude was far from black and white. A person may be respected for their sheer commitment to chivalry even if it brings them defeat, while history may excuse someone who uses underhanded tactics to achieve great results as “the end justifies the means.”