Buddhist worship, court cooking ceremonies, and other festivities for the eighth day of the 12th lunar month

The festival originated over 2,000 years ago as a celebration of the new harvest, but had no fixed date until after Buddhism spread to China around the first century CE. According to Chinese Buddhist legend, the Buddha had become as emaciated as a fowl after following ascetic practices for many years in his quest for understanding and enlightenment. Seeing his physical state, a passing shepherdess offered him a bowl of rice porridge made with beans, rice, and milk. Gaining strength and spirit after eating the porridge, the Buddha began meditating under the Bodhi tree. Then, on the eighth day of the 12fth lunar month, he successfully attained enlightenment.

The celebration of the Buddha’s day of enlightenment appears to have emerged in the Northern and Southern Dynasties period (420 – 589), when followers chanted sutras in temples and prepared laba porridge as an offering for the Buddha. Buddhists also began offering porridge to all visitors to the temple. The celebration slowly entered into folk culture and became a widespread custom over time. 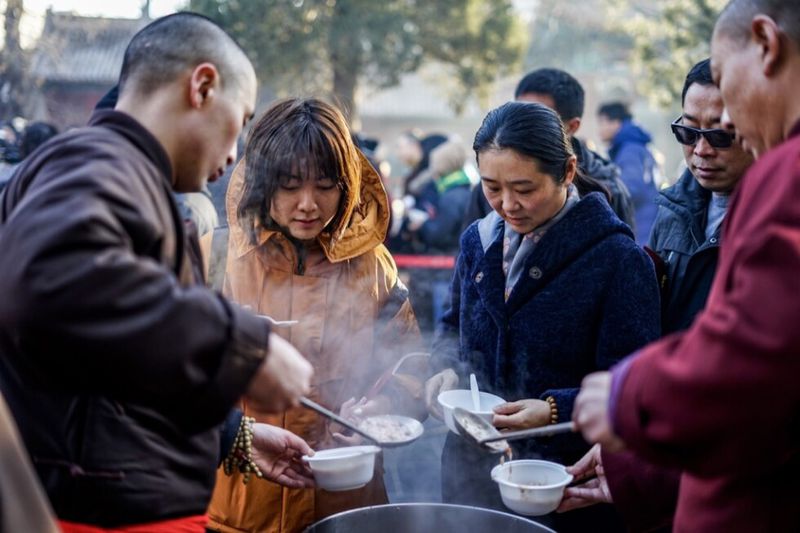 The festival became hugely popular during the Qing dynasty (1616 – 1911), when a grand ceremony would be held at the Yonghe (Lama) Temple in Beijing every year. According to historical records, a huge bronze cauldron (2 meters in diameter, 1.5 meters deep, and 4 ton in weight) was used to cook the laba porridge for the ceremony.

The palace held meticulous preparatons before the event. On the fifth day of the 12th lunar month, the Imperial Household Department (内务府), an institution that managed the internal affairs of the Qing imperial family and the activities of the inner palace, prepared the ingredients for the porridge, which by this time included cream and mutton (perhaps for the tastes of the Manchus from the north who now ruled China) in addition to grains and dried fruit.

On the sixth day, the heads of the Imperial Household Department and other ministers supervised the weighing of ingredients and the gathering of firewood. On the seventh day, the emperor sent a minister to supervise the whole process of cooking the porridge until it was finished before dawn of the eighth day, just in time for the festival.

During the ceremony, officials were led by another minister to present the laba porridge to Buddha before offering it to the court. The steaming bowls of porridge were decanted into six smaller cauldrons: the first one was offered to Buddha; the second to the emperor and the Imperial Palace; the third to aristocrats and Grand Lamas; the fourth to civil and military ministers; the fifth to other lamas at the Yonghe Temple; and the sixth to the common people as a symbol of generosity or charity.

Today, ceremonies and offerings of laba porridge are still made at Yonghe Temple and other Buddhist places of worship around the country (at least when Covid-19 restrictions on gatherings are not in place). The Laba Festival also marks the moment where anticipation begins for Chinese New Year, which takes place just a few weeks later. With new year feasts just around the corner, parents have to remind their children not to indulge in too much laba porridge. A popular saying goes, “Little child, little child, don’t be greedy; after laba the New Year will come (小孩小孩你别馋，过了腊八就是年).”