Yet even if one believes all the (dubious) claims about Yang’s extravagance, she was unfairly blamed for this particular excess. According to one legend, Emperor Xuanzong did indeed transport fresh lychees thousands of miles from southern China to his capital of Chang’an (present day Xi’an) in the north, but this was as a favor to Consort Mei, his lover before he met Yang. Lychee pork, or 荔枝肉 (lìzhīròu), a traditional dish of Fujian province, is also said to have been created for Consort Mei.

As the legend goes, Consort Mei was a native of Putian, Fujian, a major lychee growing region. After joining the emperor’s harem, she fell into low spirits and lost her appetite due to homesickness. To cheer her up, a chef surnamed Jiang, who had accompanied Consort Mei from home, rolled pork slices into the shape of lychees, fried them, and then stewed them with sweet-and-sour seasonings. This later became known as lychee pork.

Crispy, tender, and aromatic, the dish immediately won the hearts of Consort Mei and the emperor, who was soon invited for a taste. Seeing how much the consort missed home, the emperor ordered the delivery of lychees from Putian. Lychee pork was regularly served in Consort Mei’s palace during her lifetime, and after her death during the An Lushan Rebellion (755 – 763), Chef Jiang brought the dish back to Putian.

This heartwarming tale, though, has been refuted by many scholars, including the 20th century writer Lu Xun (鲁迅), who believed that Consort Mei was fictional. The earliest reliable record of lychee pork appeared in the recipe book Suiyuan Shidan by Yuan Mei (袁枚), a scholar and gourmand from the Qing dynasty (1616 – 1911). Yuan’s recipe calls for pork slices to be boiled in water, fried, and stewed in wine and soy sauce. In the modern version, the pork slices are finely cut in a crisscross pattern to make them easier to shape. Water chestnuts are added, or sometimes potatoes or sweet potatoes.

Water chestnuts, mainly grown in Guangxi, Fujian, and some regions of southern and central China, are nicknamed “underground ginseng.” They serve as a fruit, vegetable, as well as medicine in Chinese cooking. According to Ming dynasty (1368 – 1644) medical text Compendium of Materia Medica, water chestnuts can relieve internal heat, promote digestion, and nourish the lungs and liver. They’ve also been considered the ideal complement to lychees since at least the Song dynasty (960 – 1279) when poet Chen Mi (陈宓) praised them as “purple pearls…as tasty as lychee.” Consort Mei would surely have been sated. 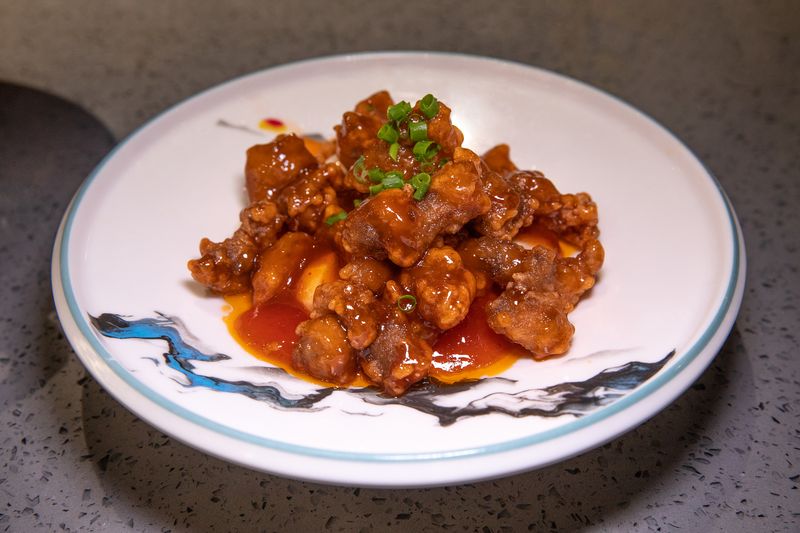 Fruit of the South is a story from our issue, “You and AI.” To read the entire issue, become a subscriber and receive the full magazine. Alternatively, you can purchase the digital version from the App Store.