If Tinder or Tantan were a rabbit hole, and Alice fell into it, she would emerge in a striking netherworld similar to AI: Love and Artificial Intelligence at Beijing’s Hyundai Motorstudio.

Faced with a wall-sized dating profile at the entrance, visitors to the September-to-January exhibition choose between two entrances into the darkened gallery: one framed by a checkmark on the right, and another with “X” for rejection on the left. Mimicking the act of swiping through dating apps, viewers meander through a jarring labyrinth of screens that obfuscate and interrogate the workings of intimacy in the age of artificial intelligence. 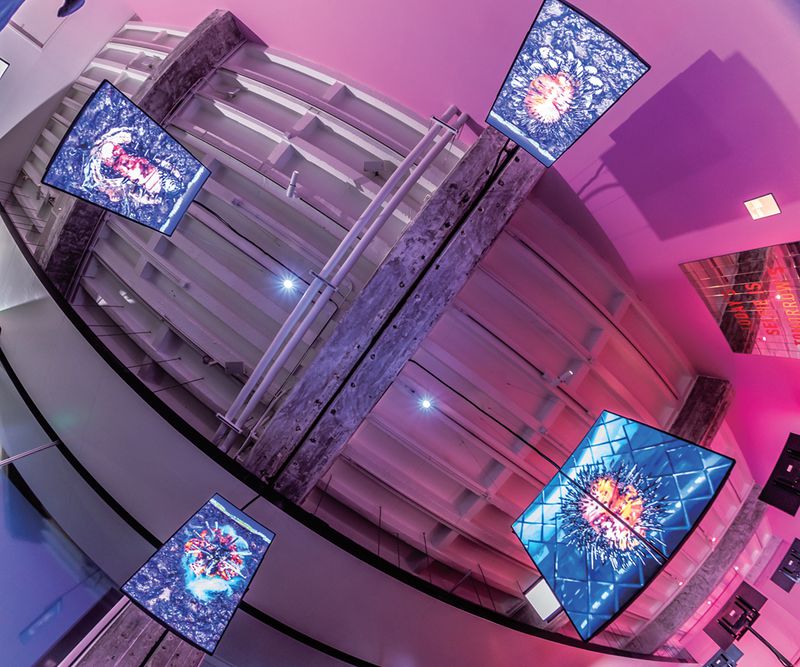 The title and concept of the exhibition hinge on wordplay: the linguistic overlap of AI, for “artificial intelligence,” and 爱 (ài), for “love” in Mandarin. The exhibition brings to life the 2019 Blue Prize at Hyundai Motorstudio, a competition in which young curators submit proposals for an exhibition. The winning exhibition on display, curated by Jenny Chen Jiaying, presents multimedia interactive installations, electronic games, and three-dimensional animations by a global roster of 12 artists.

Two paths diverge in a darkened room, but which one you take makes no difference: both will shock and unsettle. The faint halo of the phone screen is likened to a “blue hole” in Chen Zhou’s eponymous video installation Blue Hole. A young millennial crawls back and forth in a rocky cave cast in cold blue light, looking as vacant and lost as we feel when scrolling mindlessly before bed, searching for something indefinite. The smart phone becomes a liminal dreamscape, charged with expectation and quiet despair. 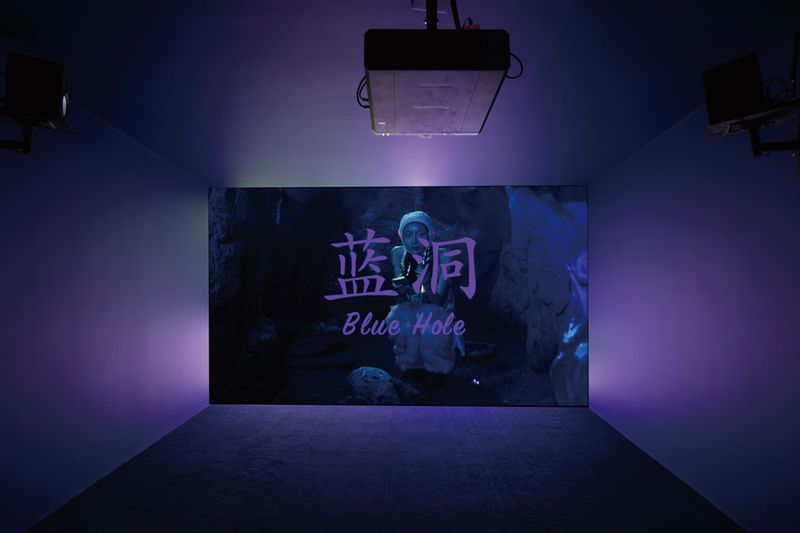 In Denmark-born artist Stine Deja’s The Intimacy Package, the darkness is punctuated by garbled barrages of unsettling sounds, barely audible until one’s back brushes up against a speaker. A screen depicts robots, which look like sewing machines, kissing on a twilit beach. The robots rotate along their axes in a way that somewhat mimics sensual necking, pushing the boundary of romance. What does two robots kissing sound like? It can only be described as a kind of slurpy, whispery, sighing buzz.

While some artists depict worlds of speculative fiction, the pieces grounded in reality are perhaps the most terrifying. Ashley Madison Angels At Work in Beijing, by the internet-based collective !Mediengruppe Bitnik, is a five-channel video installation portraying “fembots” that provided “entertainment” to 41,659 registered Beijing users of Ashley Madison, a Canada-based online dating service marketed toward married people seeking an affair. 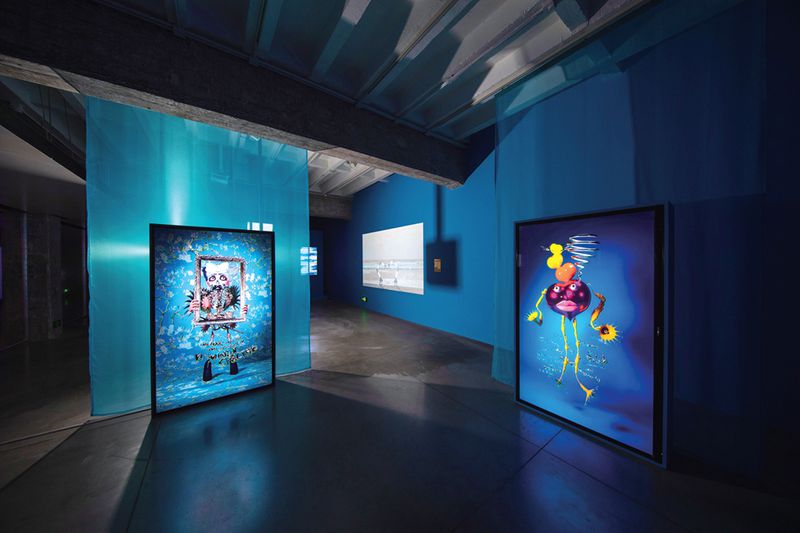 In 2015, anonymous hackers stole and released Ashley Madison’s operational code and customer data, revealing that the platform had created 75,000 female chatbot accounts to strike up conversations with its 32 million male users worldwide. The five Beijing-targeted fembots stare deadpan into space, paired with the fake name, age, and location of the bot. The piece is juxtaposed with Chinese artist Aaajiao’s I hate people but I love you, in which a stereotypically sci-fi Asian female android moans, “May I be your friend? Do I look real to you? I hope so—”

But what to do when the lovers are fictional, but the emotions are real? Visitors giggle as they play with American artists Benjamin Berman and Miguel Perez’s Monster Match, which invites users to swipe and interact on a fake dating app. Potential suitors include a blue-skinned yogi with a six-pack who “can’t live without fair trade oat milk,” and an overalls-wearing vampire who is an entrepreneur of “100 percent pure farm-to-table plasma.” (Count Daniel asks: “What do you do?” “I’m a farmer,” the user responds. “Cool, what do you farm?” “Garlic.” The screen shows: Count Daniel has left the chat.)

With humor and horror, visitors laugh and squirm through new metaphors for loneliness, love, and lust. The absurdities of our search for intimacy are laid out like laundry to dry in the darkness of the room in fabricated conversations with parodical beasts, or real instances of AI luring desperate customers into using expensive dating services. Facing the screens of tumescently writhing robots, AI: Love and Artificial Intelligence invites us to face the boundaries blurred by our all-too-human yearnings.

Gallery: AI Love You is a story from our issue, “You and AI.” To read the entire issue, become a subscriber and receive the full magazine. Alternatively, you can purchase the digital version from the App Store.