Within the heart of Nanjing lies Fuzimiao (夫子庙), a small district named after the Confucius Temple located within it. Aside from being a hotspot for historical sites, it is easily identified by the Jiangnan-style of architecture that lends the area much of its charm, surrounding the Qinhuai River (秦淮河) as it meanders through the district. Visitors need only look at almost any building in the area to see what the architecture entails.

Taking the “jiang” from “Changjiang” (长江, known as the Yangtze River) and mashing it with “nan” for south, you get Jiangnan (江南), a basic description for the area south of the Yangtze where this architectural style originated. It includes Shanghai and the southern parts of Anhui and Jiangsu provinces, along with northern Jiangxi and Zhejiang.

Although many of the buildings in Fuzimiao date back to the Qing Dynasty (1616 – 1911), much of the area was rebuilt in 1985 as part of a restoration project to give the area its historical cred. Well-heeled tourists can look into prices of trips on river-boats; the same goes for hotels in the area, but unlike the river-boats, accommodation can be found cheaper if you book ahead. 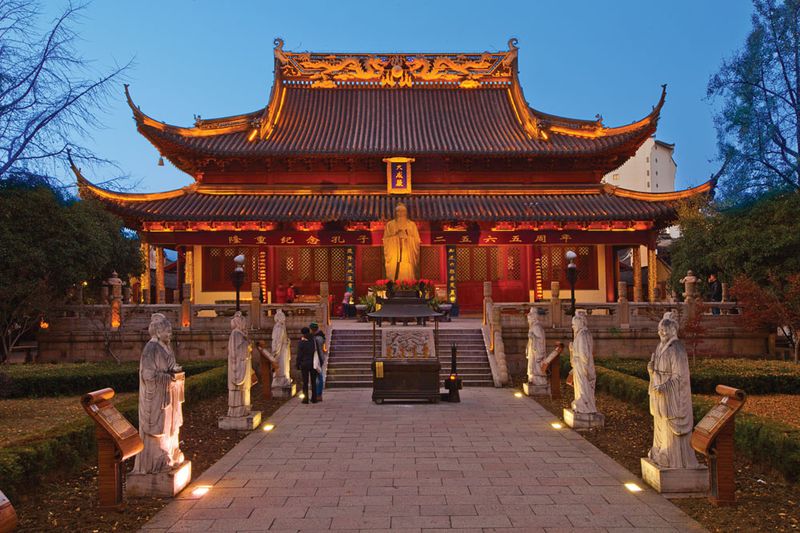 Located on the northern bank of the Qinhuai River, the Confucius Temple attracts many college entrance exam hopefuls who pray for a good score

But beyond the atmosphere of the bustling crowds, clean white surfaces, clipped terraces, and languid riverboats, a key attraction of the area is its history of romance and intrigue. This location was home to the Eight Beauties of Qinhuai, courtesans whose history has become intertwined with legend to produce some of the most compelling tales of the era.

The question of whether these women were prostitutes is not an easy one to answer; they were regarded as patriotic, beautiful women whose company was desired by men—though precisely what “company” entailed is open to debate. Literary recollections suggest that they provided educated conversation and decoration at social functions, and would later fall in love and in some cases marry.

The tragedies and triumphs of all eight beauties could occupy thousands of words of prose (and have), but none more so than Li Xiangjun (李香君), who lived in the 17th century and became a key character in the Kunqu opera Peach Blossom Fan (《桃花扇》). The tale is a love story between Li and her lover Hou Fangyu (侯方域) that uses the downfall of the Ming Dynasty (1368 – 1644) as a backdrop. Perhaps unsurprisingly, given the way history is used, the tale has become first and foremost one of patriotism, with romance as a key theme. 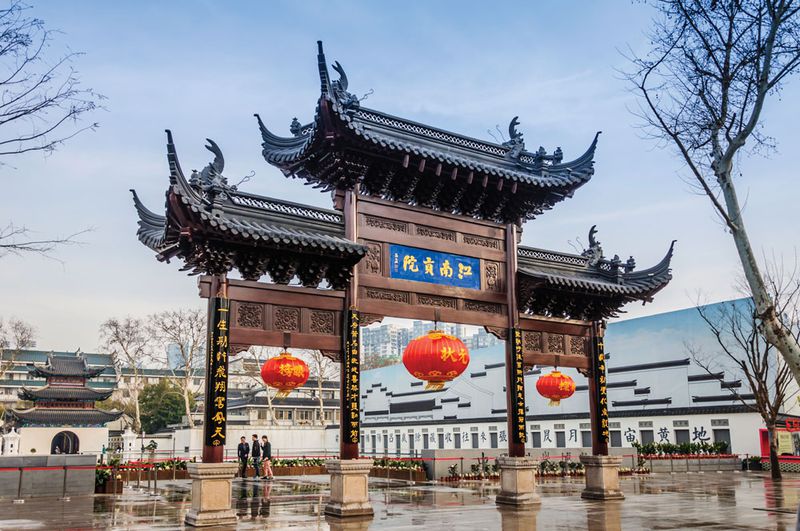 Hou was a member of a reform movement that aimed to tackle corruption in Nanjing under the Ming, but in the opera, he becomes caught in conflicts and is separated from Li after their betrothal.

Spoiler alert: though she is packed off to marry someone else, she prevents the wedding with a failed suicide attempt. The two protagonists do get together for a while but eventually opt for monastic lives because they decide it’s selfish to satiate their own desires amid such chaos.

Visitors to Fuzimiao can stop in at Li Xiangjun’s home, where much of her romance with Hou Fangyu no doubt transpired. From the windows and balcony, visitors have views of the Qinhuai River and the tour boats that meander past. While there, make sure you find the out-of-the-way hole in the ground, with a short flight of stairs leading to the pontoon where Li could board the boats coming along the river. Also, take note of the pictures on the walls—aside from stone carvings on the bottom floor depicting romantic scenes from the opera, there are collections of photographs of the various depictions of Li in popular media over the decades. 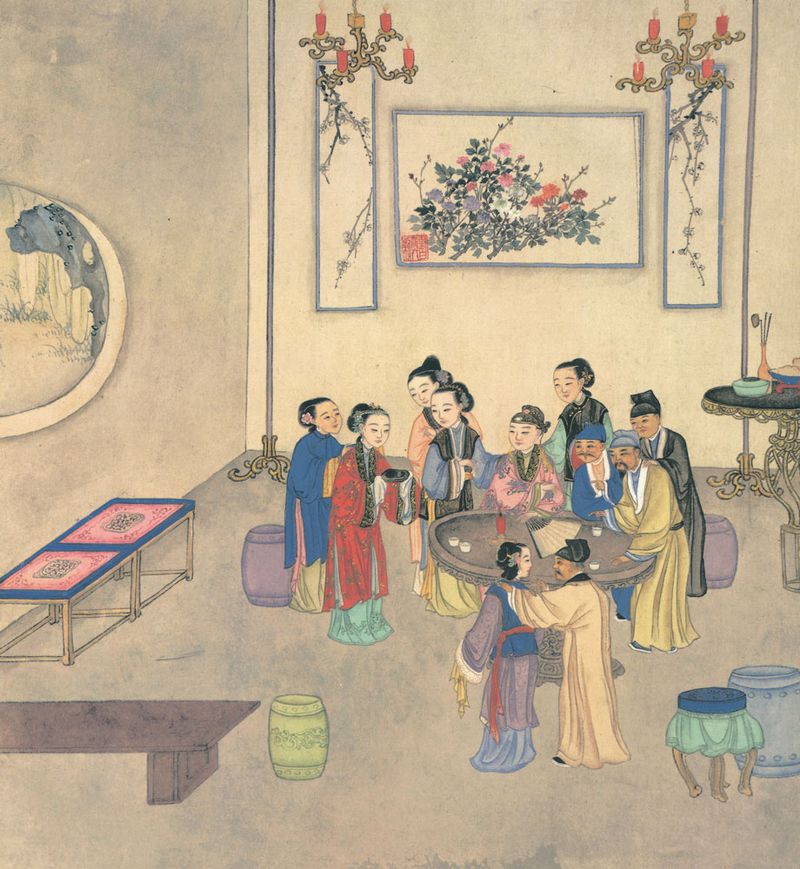 The area is a popular shopping district, so take some time to wander the stores. For lunch, the vast majority of Nanjingers will tell you that you simply must try the duck’s blood and vermicelli soup (鸭血粉丝汤). Originally said to have been created when a lowly commoner accidentally spilled some duck’s blood in his soup and found it quite tasty, other versions say it started as blood soup, and the vermicelli was the accidental garnish.

The meal itself is, well, much like a standard noodle dish with a watery soup. The duck’s blood forms congealed cubes which one can embrace or reject, depending on one’s squeamishness. Ingredients vary from place to place, with some cooks adding all kinds of ingredients from traditional Chinese medicine or duck organs. One thing most cooks can agree on is that the vermicelli ought to be made from sweet potato starch.

For those not interested in duck’s blood soup, fear not, the area is rife with restaurants. There are also places specifically geared toward tourist shoppers, so those interested in finding souvenirs and gifts have no excuses.

These shopping streets are also home to the Confucius Temple and Imperial Examination Center. The Confucius Temple, first built in 1034 (though it’s been damaged and rebuilt multiple times since), has the world’s largest bronze Confucius statue, flanked by two rows of statues depicting Confucius’s disciples. 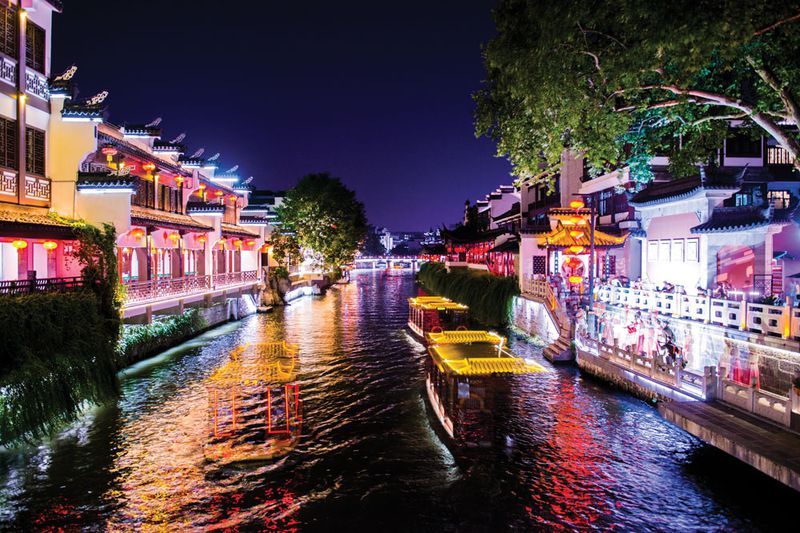 A night view of the Qinhuai River, featuring typical Jiangnan-style architecture along its banks

Anyone with a casual awareness of Chinese history knows that for about 1,300 years, the best route to the top for an intellectually-minded individual of modest means was to try his hand at the imperial examination. A good score on the test, which largely assessed knowledge of Confucian wisdom, allowed them to enter the civil service and find a position in government. Plaques throughout the center (with English translations) explain the various exam-related implements on display and even the food that was on offer during the grueling process. Apparently, the exam was so profoundly important it had dishes named after it: care to try the “Principal Graduate” or “Golden Billboard”?

And make no mistake, this was no mere exam.

At the site, you can see the stone boxes by the riverside in which the civil service candidates sat the exam. It is difficult to comprehend the full scale of the misery experienced by these poor young men. These stone boxes were out under the hot sun and the exam took nine days and six nights. The examinees slept in the cells as well, which measured 3 feet long by 4 feet wide, so lying down was out of the question.

Throw in the mosquitoes that came up from the river, and you have the recipe for a miserable experience that was as much a test of endurance as it was of knowledge.

Shang Yanliu (商衍鎏), who scored third place in the exam in 1904, the last year it was offered (he then went on to become the curator of China’s Research Institute of Culture and History), remarked: “Every time I remember the days in the examination cells, I can’t help laughing at my misery.”

At its peak in the Qing Dynasty, the Jiangnan Examination Hall had 20,644 of these cells, so it could test a truly staggering number of candidates in one hit. One can only imagine the smell of sweat from 20,644 hot stone boxes lingering in the air. 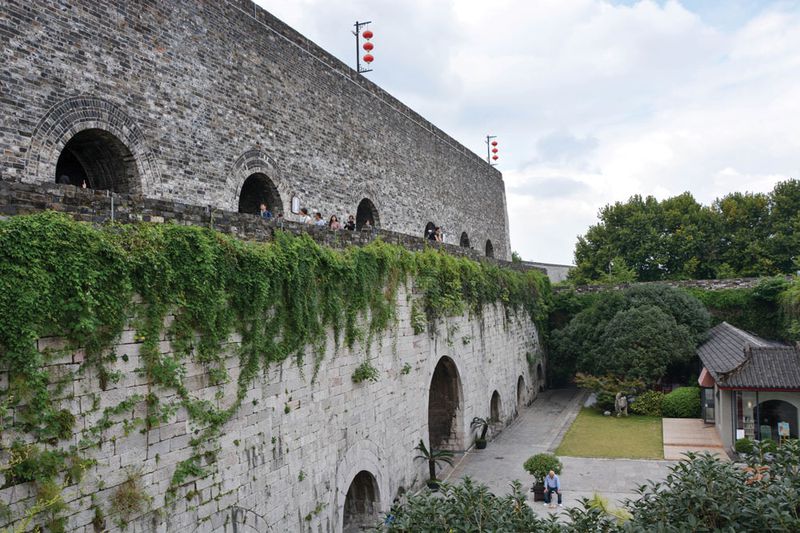 Zhonghua Gate, also known as the “Gate of China”, looks much more like a castle than a mere gate from its interior

Success brought esteem for the examinees families, who would hang up decorations in their household as a means of bragging about their offspring’s triumph. In many ways, there are similar attitudes toward today’s college entrance examination. Seen as a shot at the good life and a boost in status for the entire family, parents, both then and now, put massive effort into ensuring a good result. And as with today, significant measures were used to prevent cheating, such as a wall of thorns around the testing premises to prevent outside assistance.

The examination center was first built around 1168. It first served as a provincial examination site, but when Nanjing became the imperial capital it was commensurately expanded. Today, the museum on the site is much smaller than the 30 hectares the examination center once occupied, and probably has fewer distractions—a government-run brothel once operated directly opposite it across the river.

When visitors have checked out the parks and sites within the few blocks of Jiangnan-style buildings, they will also want to take the five-to-10-minute walk south toward Zhonghua Gate (中华门). Although the route takes you out of the tourist area, if you stay within a stone’s throw of the river you can’t miss the gate—it’s essentially a fortress.

Sometimes referred to as Zhonghua Castle, the site comes complete with ramparts and a number of courtyard areas, some of which were designed to allow invaders part-way into the facility so the soldiers on the wall could rain death upon them.

Nanjing has China’s largest and arguably most intact city wall, albeit as with all historical sites, much has been reconstructed. The wall that surrounds the city, including Zhonghua Gate, took 21 years to build, starting in 1360. Most of the structure of the gate itself has not been changed for 600 years.

Zhonghua Gate was a key point of entry to the city and security was most certainly tight. The gate was first called Jubao Gate (聚宝门, Gathering Treasure Gate) and was renamed “Gate of China” by the Kuomintang. This was because the opposition Beiyang Government in Beijing had named their southern gate “Gate of China”, and this, naturally, had to be countered.

From the top of the outer wall, visitors can look down upon the river and bridge, and envision the challenges any invader would have faced. The river acted as a moat, preventing attackers from getting close, while weapons of war inflicted casualties from the ramparts.

A selection of these weapons is on display at the top of the wall. Aside from cannons, there are also giant crossbows on wheels, designed to fire four giant arrows at one time over a large distance. There are also devices that resemble spiked barrels, which defenders could roll down stairs to wound those who sought to ascend. Visitors can also wander across the wide open space at the top of the gate for outstanding views of the city.

And from that vantage point, spare a glance back toward Fuzimiao. There, viewers can make out the elegant Jiangnan rooftops and marvel at how so many impressive historical sites and shopping streets can so compactly be organized along the sides of the river. Take a moment to wonder what defenders of the gate must have felt as they first looked out beyond the city limits as invading armies approached, then back across their gorgeous city.

“Jiangnan Style” is a story from our newest issue, “Climate Change”. To read the whole piece, become a subscriber and receive the full magazine. Alternatively, you can purchase the digital version from the iTunes Store