As of January 29, we will all be in the Year of the Chicken. Naysayers will point at all the iconography and billboards with roosters on them and tell you it’s the Year of the Rooster, but to them I say “Pah! Is your 宫保鸡丁 actually Kung Pao Rooster? No? Then back off.”

The character used in the Year of the Rooster is 鸡. Such is the ambiguity of Chinese, that this character applies to both males and females of the species. I submit to you, now, that the year itself does not discriminate in favor of roosters over chickens. It’s a year. It doesn’t care.

So then we come back to the cultural, historical, and social constructs that have led to this year being categorized as the Year of the Rooster. I suppose I should delve into these when making my case. You’re probably not gonna like the findings though.

So the key claim for it being the Year of the Rooster revolves around the great race which is said to have established the 12 animals of the Chinese zodiac. The tale involves a Rooster crowing at dawn, so if a bird crows in this story, then it stands to reason that the year, in fact, revolves around a rooster, right?

If we’re gonna go by all this ancient hokum, then I would draw your attention to the old Chinese saying: 牝鸡司晨 (pìn jī sī chén). The phrase refers to the hen that crows at dawn. It is said to mean that a wife who wears the pants in a family has usurped a man’s power, or that a nation with a female ruler will encounter trouble.

Two points I want to make here: 1)  If a hen can crow at dawn, then the main claim for it being the Year of the Rooster has been blown to pieces. Without eyewitnesses, how can we be sure that the fabled rooster of yore was not, in fact, one of these dastardly crowing hens?

2) Also, it would seem that more than a little ancient Chinese wisdom was sexist as hell, so it seems pretty likely that they’ll just hand all the sweetest gigs to the male animals by default. 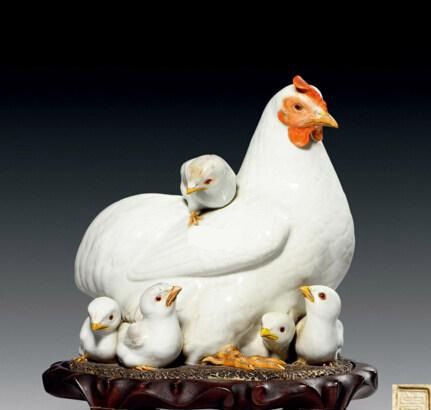 Boom. That work of art right there is themed around the chengyu (成语, four-character nugget of wisdom), 五子登科 (wǔzǐ dēngkē), which literally means “five children passing the imperial examination”. This saying was used in conjunction with good fortune in the year of what I can only assume is the chicken, and basically came about because the word “ke” (窠) is nest, and the imperial examination is “keju” (科举) and they sound similar. The point here is that hens are represented in traditional art as good wives and mothers, so they too have a place in all this good-fortune Spring Festival iconography.

Also, when discussing chickens or roosters as being a symbol of good luck, have a look at this ceramic plate on display at the national museum. Looks an awful lot like both males and females if you ask me. 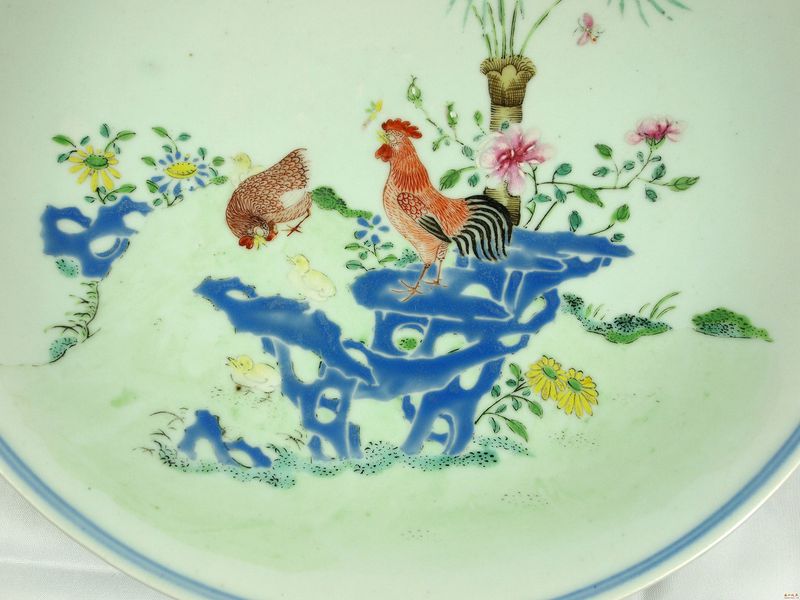 Or, perhaps, for a more modern display of the ambiguity involved, have a look at how this mall celebrated Spring Festival in the Year of the Rooster. The China Daily may have obliviously titled their gallery “Chicken Artwork Celebrating the Year of the Rooster” without being aware of the avian gender restrictions in the term Rooster, but the pictures used aren’t all roosters.

So next time someone wants to tell you that it’s the Year of the Rooster, feel justified in telling them “or the Year of the Chicken. It’s ambiguous.” This probably won’t win you new friends, but you do get to drop a knowledge bomb.

Then, perhaps, we can move on to litigating whether or not it’s the Year of the Sheep (羊) or Goat (羊).

Image of the “wuzi dengke” art piece from Artron.net, cover image from pixabay.com