Welcome back one and all to the wonderful world of the Viral Week. We hope that everyone in Beijing is enjoying the blue skies indirectly gifted to us over the weekend. Coming up on today’s edition, we bring you a security guard taking advantage, people pushing a train, a male pregnancy experience, and the THAADest rap around. But first…

On a scenic route in Hong Kong, one driver, in their Tesla Model X, attempted to get by a double-decker bus. Unfortunately, the road is notoriously narrow and the driver had clearly not stuck to their lane before the encounter. Fortunately, a drone was present to capture the whole incident in crystal-clear definition.

The road at the Tai Tam Reservoir is only five meters wide. Combined with the fact that the Tesla driver acted more like they were driving a bumper car than state-of-the-art wheels, it only took two minutes before other drivers decided to help out.

And as the Tesla finally untangled itself from the situation, it was greeted with insults and jeers from the line of cars behind the bus. But at least it didn’t try to U-turn itself out.

The quickest way off is down (Shanghaiist)

Have you ever been at a bus terminal in Zhengzhou and felt that the security guard was just a tad too handsy for your liking? No? Oh, you’re male. That explains it.

Recently, a woman complained to the bus terminal staff that one of their security inspectors had been too enthusiastic with his body-searching. Footage was then released to show this individual exercising gender bias in his work. 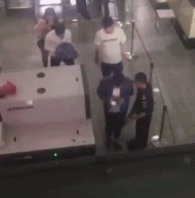 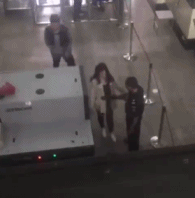 “I have to be sure you ain’t packin'” (Shanghai Daily) 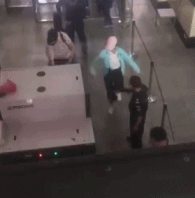 “Oh, you definitely look suspicious with that hat on” (Shanghai Daily)

Soon after, the man was detained, but it remains unclear what his punishment will be.

In a rare showing of unity, passengers on the Guangzhou Metro came together to help out an elderly woman after she slipped and her leg fell into the gap we’re supposed to mind between the train and the platform.

The video below shows passengers quickly rushing out and pushing the train in order to allow the lady to extricate her leg. Luckily, thanks to them, she escaped the situation without serious injury.

Having watched the video, one question still remains—if the people outside were helping to free the woman’s leg, what were the people still inside hoping to achieve?

Firstly, we here at TWOC hope that all mothers and soon-to-be mothers out there had an amazing Mother’s Day.

Secondly, in preparation for this holiday, a hospital in Chongqing held a special event in which men were able to strap on a device which would allow them to feel the pain of childbirth.

The machine had ten levels of pain, which is one more level than Dante’s Inferno. This should tell you all you need to know. The men reported that the first level was akin to a mosquito bite. By the end of the test, they were begging for the machine to be switched off.

In addition to this pain device, the hospital also provided belly sacks which simulated pregnant bellies. This was to allow the men to experience the discomfort and inconvenience that comes with pregnancy.

New South Korean president Moon Jae-in recently said that he was looking to help Hallyu—South Korean pop culture—make its way (and influence) back into China.

Previously, there had been a ban on all things Korean after the THAAD (Terminal High Altitude Area Defense, an antimissile system) fiasco. This deprived Chinese citizens of their much-loved K-Pop and K-Dramas.

But could this new regime make amends and get groups like Big Bang and Girls Generation back in?Not if the performers of the Chinese group CD Rev have anything to say about it. Hailing from the province of Sichuan, CD Rev released a video earlier this month in which they attack South Korea over their deployment of THAAD.

Their weapon of choice? Rap.

CD Rev are no strangers to politically-charged songs. Previous topics of raps include Mao Zedong’s legacy and the South China Sea.

“How many times do I have to warn you my lovely little neighbor boy?”

Cover image from the rap video above.

Missed last week’s Viral Week? Catch up on what you missed here.