It’s hard to imagine that any organization called the China Standardization Administration and General Administration of Quality Supervision, Inspection and Quarantine could manage to stir the (hot) pot of a years-old culinary controversy.

But like a bumbling yet well-meaning Chinese grandparent, the, uh, CSAGASIQ issued a policy to standardize the use of English on public signage (effective December 1)—“eradicating poor translations that damage the country’s image,” according to People.cn—and mentioned that malatang (麻辣烫 málàtàng), the Sichuan snack of skewered meat and vegetables cooked in spicy broth, shall henceforth be known as “spicy hot pot.”

Meanwhile, “hot pot” will still refer to 火锅 (huǒguō), that dish where you use chopsticks to cook meat and vegetables in spicy and/or non-spicy broth.

Rather than reducing confusion, the new classification merely fuels the fire among netizens on the difference between malatang and regular hot pot.

Questions on the topic are mainstays on Q&A platform Zhihu, often attracting peppery responses from Sichuan users who deplore ignorance of the subtle differences between their many reddish regional concoctions. Several news outlets led with news of the new malatang definition—“in the future when you see ‘spicy hot pot’ you’ll know right away that it’s malatang,” enthused Xinhua.

So what is the difference? A Sichuan acquaintance vouches for the following family tree of “foods cooked in hot oily broth,” which has been circulating on Zhihu: 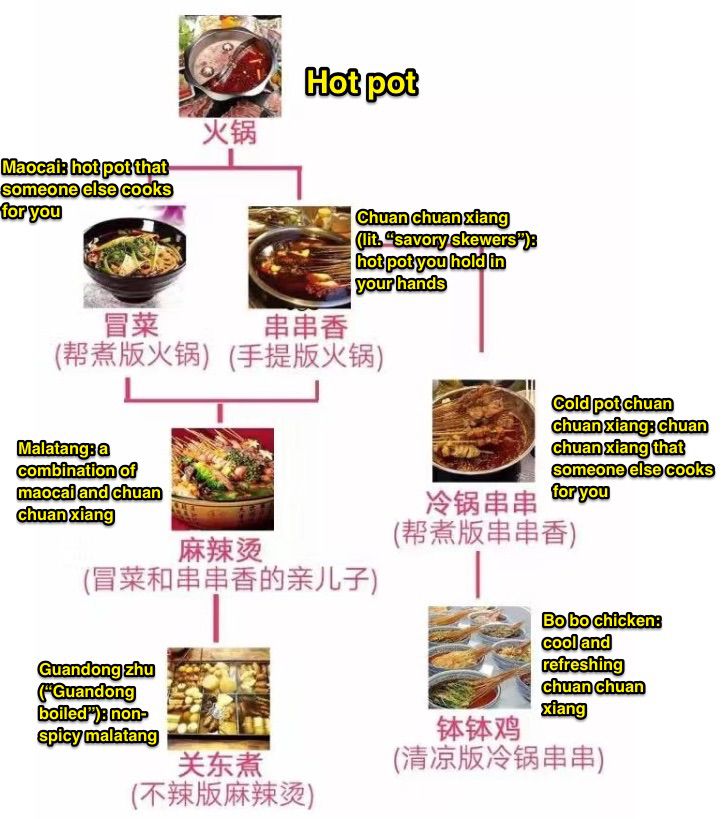 As the diagram shows, hot pot is the grandfather of all of these dishes; maocai and malatang are distinguished from hot pot in that you get your own pot and someone else cooks it for you; malatang is further distinguished in that traditionally, the food is prepared on a skewer before being dropped in the broth.

While hot pot has been well-known across China for decades (and northerners have their own version, 涮羊肉 or “Manchu hot pot”), malatang only became popular outside Sichuan within the last decade or so. Vendors in other provinces are also not very consistent with how they name their dish: At many malatang restaurants today, the food doesn’t come on skewers but simply a plastic dishes for the customers to choose from. Crucially, roadside stalls calling themselves malatang have a set-up that actually adheres more to the diagram’s notion of “chuan chuan xiang.”

So far the name changes have made only slight reverberations on social media, with netizens voicing mild disapproval after People’s Daily released the definitive list on their Weibo account. Instead, everyone has gotten incensed by a bigger controversy—as Xinhua states, “translating 豆腐 into English, it should be ‘doufu’ or ‘bean curd.’ The pinyin ‘doufu’ is already widely accepted internationally; remember not to write ‘tofu.’”

The ensuing outrage on Weibo is hotter than any malatang.

Cover image from 58.com and Mafengwo