Four upright officials from ancient history, and the lengths they went to avoid taking bribes

Chinese history is littered with tales of powerful officials who succumbed to temptation and bilked the system for all they could. To combat this, governments of the past and present did their best to create or cultivate role models they could promote.

Almost every dynasty has one of these characters—a figure so upright and honest, they grab attention for refusing to give in to earthly desires. In most of these cases, the official is presented with the opportunity to take something modest for himself, but has to find a tactful way to refuse.

No doubt the tales behind some of them have been exaggerated, even to the point that each became known by a particular nickname, but perhaps that’s why they’re still remembered today. 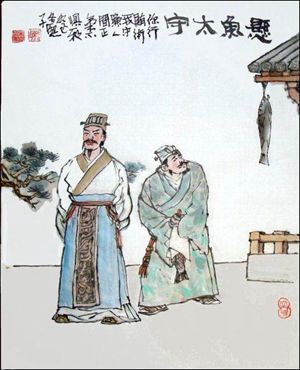 In 1947, Chairman Mao drafted the “Three Rules of Discipline and Eight Points for Attention” for the People’s Liberation Army, which contained a famous no-looting clause: “Do not take a single needle or thread from the masses (不拿群众一针一线).” This saying later became widely used as expectation for government workers. But for Yang Xu, a prefecture chief of Lujiang during the Eastern Han Dynasty (25 AD – 220 AD), this saying could be shortened to just “no taking.”

When Yang served as the prefecture chief, it was said he never took bribes and managed to get by on his meager salary. Jiao Jian, one of his subordinates, felt sorry for Yang’s penury, and sent him a live carp to cook for a meal. Though Yang understood that Jiao was not trying to bribe him, but just being nice, he still wouldn’t eat it. It would have been awkward to reject it entirely, so he ordered it to be hung from his house beam. Apparently, hanging the fish demonstrated his integrity, and he became known as the “fish-hanging prefecture chief.”

No word on how bad his house must have smelled.

Compared with Yang Xu, the attitude of Liu Chong, another prefecture chief of the Eastern Han Dynasty, was softer. Liu was in charge of Kuaiji prefecture, and made many contributions to locals. When Liu was set to leave office, the local people got together and raised some funds for him. As a clean-fingered official, Liu certainly couldn’t accept that, but he didn’t want to disappoint the people, so he picked one coin out of the pile as a souvenir and returned the rest. Because of this story, Liu earned himself the title “One-Coin Prefecture Chief.” 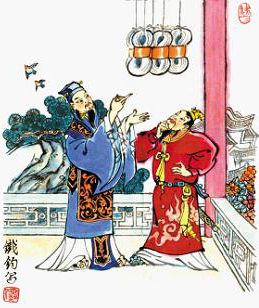 Ancient officials sure liked to hang things from house beams. Shan Tao, a famous litterateur and high-ranking official in the Western Jin Dynasty, was working in the Henan city of Luoyang as Minister of Personnel when a less scrupulous official named Yuan Yi came to his house with 100 jin (0.5 kilograms) of silk, hoping that Shan could help him get a promotion. Knowing that one man couldn’t stand alone against the climate of corruption at that time, Shan didn’t refuse to take the silk outright. He received it, put a seal on its wrapper, and hung it from the beam of his house. Later, when Yuan was arrested for bribery, those who had taken his bribes were all investigated. Shan was also investigated. But the investigators only found that silk still hanging on the beam, covered with thick dust. The unused silk proved Shan’s innocence, and people, as always, gave him the name—”The Silk-Hanging Minister.”

It seems that many officials believed that as long as they didn’t trade or use the gift, it wasn’t corrupt to take it.  But Yang Zhen, an official from the Eastern Han Dynasty, was not one of them. Yang served as the prefecture chief in Donglai. One day he was visiting Changyi county on business. One of his students, Wang Mi, was the County Magistrate of Changyi at that time. To welcome his teacher, Wang brought ten taels of gold to Yang at night, and said: “It’s dark now. No one knows.” But Yang didn’t accept the gift, and taught Wang a serious lesson, saying: “The heaven knows, the earth knows; you know, and I know. How can it be that ‘no one knows? (天知、地知、你知、我知，何谓不知?)”

Yang later became known as Mr. Four-Knows because of this story, though it’s really curious how other people got to know about the private conversation between Yang, Wang, heaven, and earth (perhaps discretion and humility weren’t in Yang’s repertoire). Wang’s famous quotation often appears in today’s TV shows. However, ironically，in some cases, when people say it, they are encouraging others to do something shameful. When they say “The heaven knows, the earth knows; you know and I know,” they mean, “Your dirty secret will be safe with me; there won’t be a third human who knows it.”

Cover image featuring Hai Rui, an upright official of the Ming Dynasty, from TV series Ming Dynasty in 1566, from sohu.com