It’s become cliché for Chinese travelers to claim that they are venturing into the Tibetan region to “purify their hearts” because it’s the closest place to heaven. But for many Tibetan Buddhists in the Deqen Tibetan Autonomous Prefecture in southwest China’s Yunnan, a pilgrimage to the “Holy Waterfall” in the Meili Snow Mountains is a genuine annual obligation.

This two-day hike takes visitors through mountains and valleys, natural wonders created from the Indian subcontinent’s collision with the Eurasian Plate, and includes overnight stops at some of the most secluded villages in China.

Our journey began with relative ease of access at Xidang village and reached all the way to Nanzhenglaya Pass, up to 3,800 meters in altitude. Once over the pass, a vast green valley unfolded before us, framed by misty mountains. Our next stop at the bottom were the Upper and Lower Yubeng villages, nested between three of the snow-capped mountains.

The upper village is en route to a hiking camp on the highest peak of the Meili range, Kawagarbo, spiritual home to a warrior god of the same name according to local belief. In 1990, an expedition of 17 Chinese and Japanese hikers set off from here to conquer the peak, only to meet their end in a deadly nighttime avalanche. To this day, no man has ever set foot on the summit and further hiking activity has been banned by the government, out of respect for local customs and to prevent another tragedy.

The road to Lower Yubeng village, on the other hand, leads to the Holy Waterfall, a three hour trip and our destination the following day. The round-trip back to Xidang, through Ninong and around the mountains, can be dangerous, with narrow paths, steep falls, and slippery crossings—there have been several deaths—but the path to the falls is generally considered safe.

Nevertheless, as we approached our destination, a middle-aged Tibetan man suddenly fell into the arms of his wife; we were told he had high blood-pressure. Two monks began massaging his neck, trying to relieve his discomfort while the crowd began to pray. Lacking first aid supplies, we stopped every returning hiker until we found two who rushed to offer their help.

Relieved, we arrived at the sacred falls. Locals believe the magical water is smuggled from heaven by Kawagarbo, and can wash away bad luck. It is only a small waterfall of ice-cold water from the melting glacier, but one in which we got dutifully soaked.

But a further shock available on our way back—we found the wife of the Tibetan man grieving as her husband’s body was wrapped in plastic, and a mule idled nearby to transport it. Some tried to comfort the woman, saying the man was lucky to be taken by the mountain god on his pilgrimage. Nature suddenly felt like an elephant, while we were ants, as powerless as a dying man on a remote mountain. 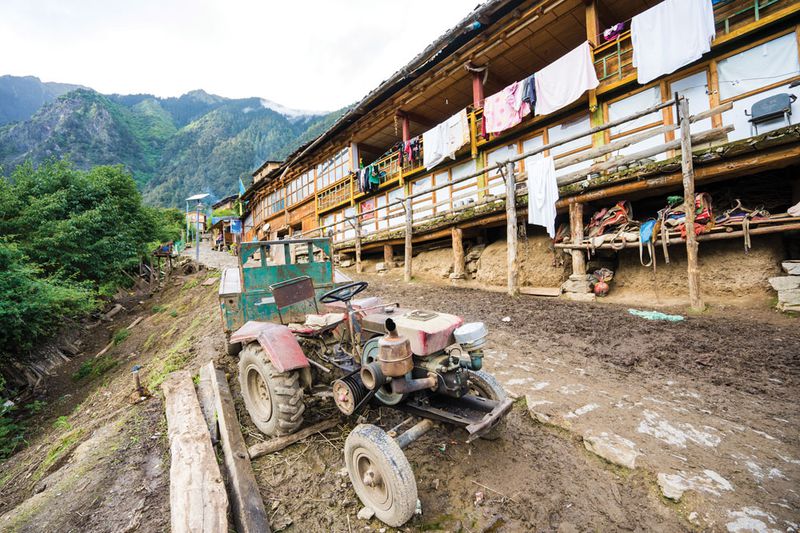 In lower Yubeng village, tractors and motorcycles are the most advanced forms of transportation 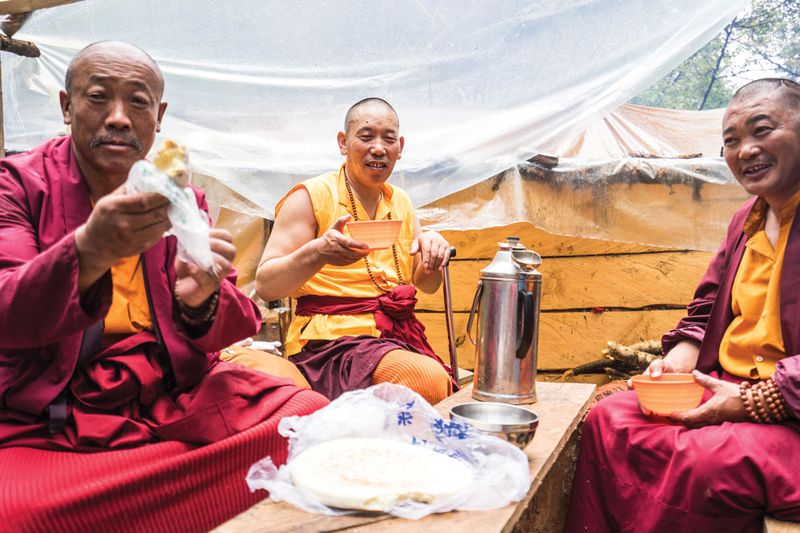 Monks making their pilgrimage from Garze county, Sichuan province, offer to share a lunch of cakes made with highland barley 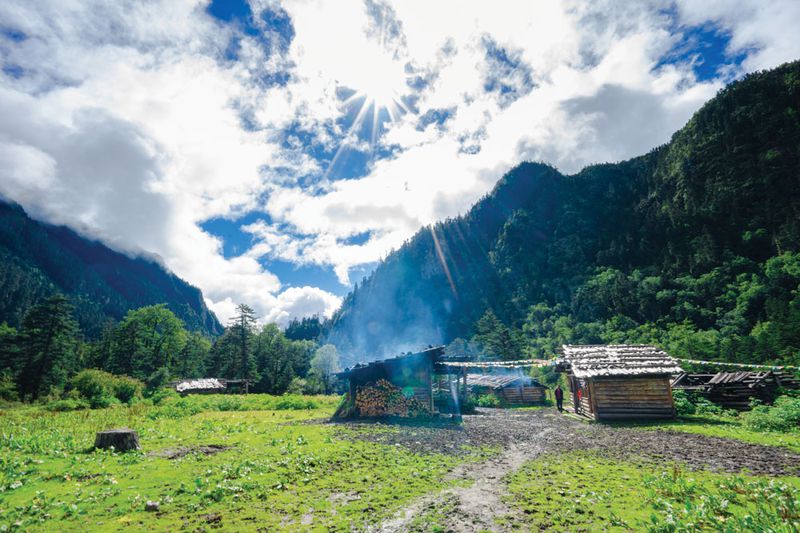 The camp at the base of Kawagarbo Peak has been abandoned since the hiking ban, and is now used either as a cowshed for local herdsmen, or a rest stop for visitors 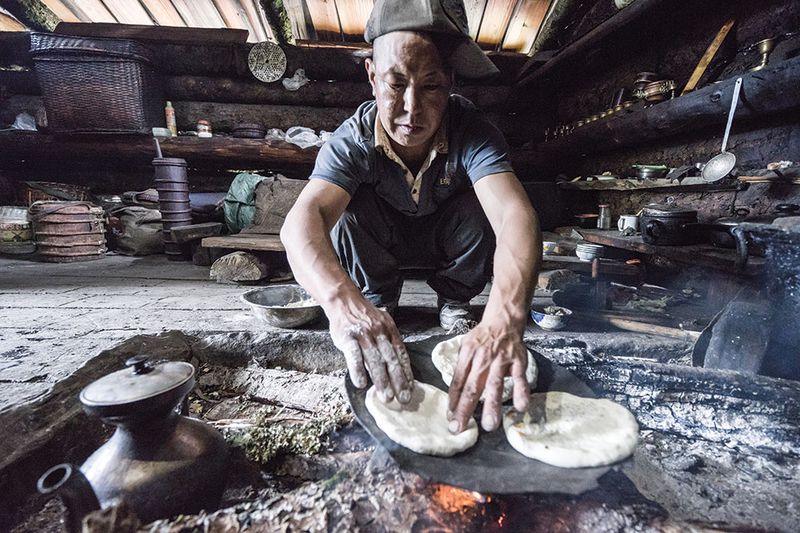 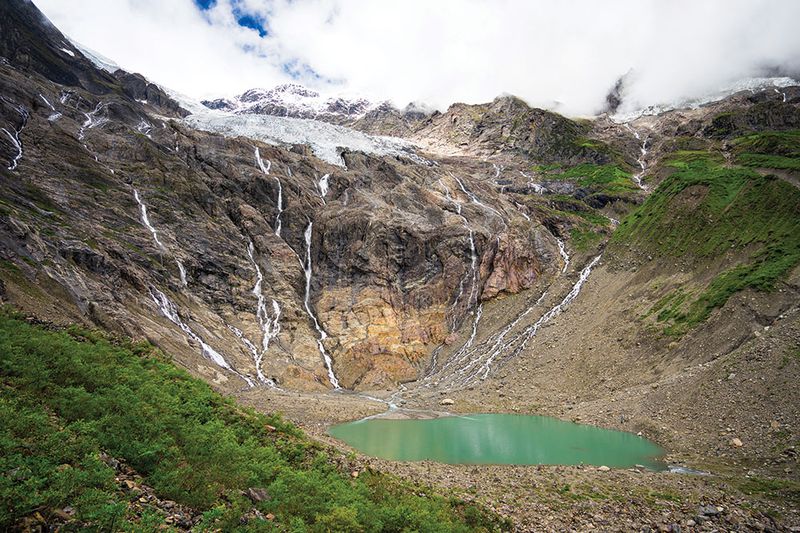 The ice lake on the Meili Mountains formed by melting glaciers

Shower of the Gods is a story from our issue, “Wheel Life China.” To read the entire issue, become a subscriber and receive the full magazine. Alternatively, you can purchase the digital version from the App Store.

Zhang Demeng (张德萌) is a contributing writer at The World of Chinese.