The enduring cult appeal of an 18th-century literary classic

The appeal, half-desperate and half-defiant, appeared at the start of the 2008 fall semester at Nanchang Aviation University. “Do you think it’s possible to start a Dream of the Red Chamber association at a school like ours?” a student posted online. “I think if a university doesn’t even have a ‘Red Chamber Association,’ then it cannot be called a university.”

Published posthumously (and unfinished) in 1791, Cao Xueqin’s Dream of the Red Chamber has been declared a masterpiece and “the book of the millennium” in translation, yet remains almost unknown in the West. In China, though, the book—a vast, allegorical portrait of Qing household life, sometimes known as The Story of the Stone—is so beloved, it has spawned its own field of scholarship, known as redology. For professional redologists, there are mysteries to solve and manuscripts to authenticate; while for regular fans, there’s period costumes, themed parties, and endless WeChat articles to share.

The aviation student’s plea in this case fell on largely deaf ears: The author updated the thread just two months later to say that he’d given up due to lack of interest, though he logged on five years later to urge new students to keep trying. But whatever stymied his efforts, it wasn’t because he underestimated the popularity of the literary classic in campuses and beyond.

Founded in 2005, the Renmin University Red Chamber Association (“Renda Hongxie”) is the kind of club likely envisioned by the student in Nanchang. Following similar organizations at Peking University and Tsinghua University, a group of students set out to create a space on campus where they could host literary lectures, throw potlucks, and socialize with others who shared their love of a 200-year-old book. Former Renda Hongxie president Wang Junyan says that, while the club followed its illustrious forerunners in inviting literature professors and scholars to give talks, over time, it has come to emphasize social aspects over the academic.

Wang says she first read Dream of the Red Chamber in middle school, but never full appreciated it until she picked it up again in high school. The novel closely mirrors the experiences of the author’s grandfather, Cao Yin (曹寅), once a prominent southern official for the Kangxi Emperor (康熙帝). When Kangxi died and Emperor Yongzheng (雍正帝) took over, the family fell out of favour and was purged; ruined, the Caos exiled themselves to a hutong in Beijing––far from the grandeur of their original mansion. Amid the dull, utilitarian texts she was cramming for her gaokao, the novel stood out to Wang for how well it was written. Zhengding county, Hebei, is home to the Rongguo Mansion, which was built to showcase scenes from the novel and was used in a TV adaption in 1987. This scene shows royal consort Jia Yuanchun during an imperial visit home (Liu Jue)

“There was so much beautiful poetry…the characters are so realistically drawn and nuanced; it’s a very moving story, handed down through history,” she told TWOC. “I’d read it every night after my homework. In my first year of university…[Renda Hongxie] was the only student club I joined.”

New members typically meet at a fall introductory session where, they went around the room stating their name, major, and year. But their icebreakers had a twist; members might be asked to name their favorite character from the novel and why they identify with them, or share their favorite chapter or poem. Activities include themed games or handicrafts, an annual pilgrimage to the author’s old home at the Beijing Botanical Gardens, and biweekly meetings where members discuss Red Chamber-related articles—but also chat about mundane topics over free snacks, with the assurance of having found a niche on campus.

“We don’t do those icebreakers much these days; people can just join the WeChat group and come to the meetings, and we might chat about anything,” Wang admits. “It’s more the idea that you get to talk to other people who’ve felt an interest and a connection…and, say, if you use an allusion [or] an old-fashioned figure of speech, you know everyone in the room will get it; or, if something happens to make you reflect on the novel, inspires you to write a poem, it can get published on our WeChat account.”

Plenty of other clubs take a more rigorous approach, though. The Red Chamber Cultural Society at Xi’an’s Chang’an University hosts regular talks on the novel, prepared by the student themselves. In March, Zhongshan University’s Red Chamber Study Society in Guangzhou held a workshop on the orchid-shaped hairpins worn in the novel’s hugely popular 1987 TV adaptation (just one of the reasons for the book’s enduring popularity). On a national level, the Red Chamber Fan Club has chapters in all major Chinese cities to help high school and university students start their own clubs. They also hold weekly public readings at their Beijing headquarters, and celebrate most lunar calendar holidays with traditional activities like kite-making or flower-watching, both described in lavish detail in the novel.

Though ostensibly a family drama about 18th-century aristocracy, Dream of the Red Chamber has long enjoyed an eclectic fan base. In the mid-1700s, when hand-copied manuscripts of Cao’s original chapters began to circulate, the text’s rich examples of foreshadowing, poetic verse, and literary allusion inspired scholars to add their own annotations as they transcribed the work. This interest only grew after Cao died sometime in the 1760s, leaving behind only 80 finished chapters of the 120 found in most modern editions of the work. 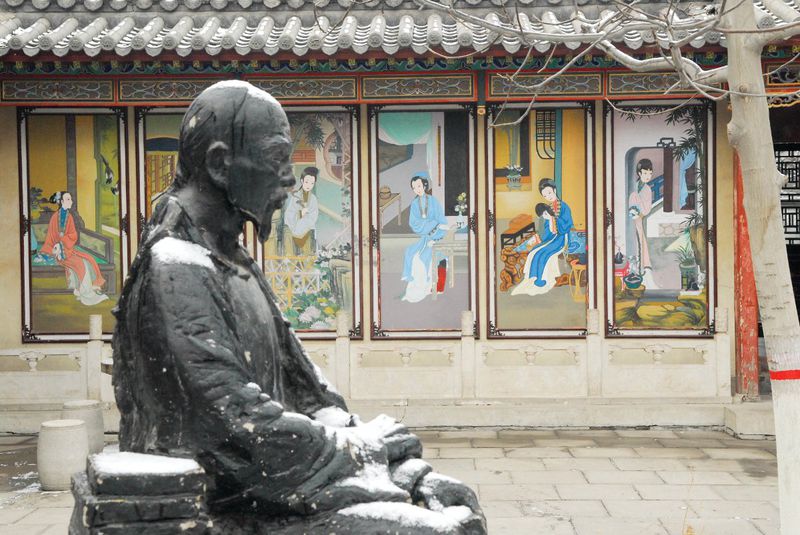 In the centuries that followed, scholarly commentary, speculation, and attempts to definitively conclude the saga grew into the discipline of redology, with a diverse body of adherents. Gray-bearded governors wrote poems and treatises on the tragedy of the novel’s central love triangle; prominent political scientists Hu Shi (胡适) and Cai Yuanpei (蔡元培) fought over the best way to infer the author’s intended ending. Writer Eileen Chang reused sentence structures and themes from the novel in her short stories, while Mao Zedong claimed to have read the novel five times, praising its critique of class relations: “To not read [the novel] is to not understand China’s feudal society…anyone who has not read it three times had no power to discourse.”

Mao’s endorsement ensured the novel was one of the few ancient works not banned during the Cultural Revolution, though China’s leading redologist, Zhou Ruchang (周汝昌), was imprisoned in a cowshed then dispatched to Hubei. To Liu Xiaolei, professor of Chinese literature at the Beijing Institute of Technology, this survival gave the novel a particularly strong cultural imprint. “It contains all elements of Chinese culture, traditional practices that are described in detail,” she says. “Also, the author wrote about very ‘soft’ subjects, such as love, the life of the aristocracy, young women—it’s very beautiful and poetic…These things made it easy to access.”

It’s also a work that’s adept at moving with the times, with multiple adaptations to TV, film, theatre and opera. The book’s wide embrace of culture ensures its appeal across many interests. At Renda Hongxie, Wang says, “We’ll perform at the annual student showcase with the hanfu (traditional costume) society or the guqin (seven-string zither) society, and introduce the show with a line from the novel, or act out a scene…we’re just one of many clubs on campus catering to those with an interest in traditional culture.”

As interest in the novel moves away from what Liu calls the “niche study” of redologists and their habit of “delving into hidden political meanings,” Weibo and public WeChat accounts have sprung up for and by the “grassroots,” rather than academic experts. These analyze and adapt the novel’s pertinence to issues as diverse as parenting or modern relationships. The Red Chamber Fan Club now streams its weekly public readings on WeChat, and a few accounts, like Shanghai-based “A Dream in the Red Chamber,” host events where fans around the country will read a chapter or related essay, then discuss afterwards in a WeChat group.

“Modern fans are definitely not like mainstream redologists, as their interests are much more varied,” says Liu, who runs her own Red Chamber WeChat account. “Some are fanatics, who never really ‘left’ the novel and actually imagine themselves to be the characters, but I think most people who follow me just love the novel and are looking for something deeper.”

The Red Chamber Study Association at Henan Normal University is a student-run group that hosts lectures, plays, and discussion groups based on the classic novel. TWOC asked the club to provide their favorite unanswered questions from the book.

Red All About It is a story from our issue, “Beyond Go.” To read the entire issue, become a subscriber and receive the full magazine. Alternatively, you can purchase the digital version from the App Store.