Want a makeover? The TWOC guide to the top selfie-editing apps and how to use them.

Just about every social-media savvy person in China has come across a suspiciously good-looking picture of someone they know isn’t that pretty or handsome. On women, their eyes are bigger, the chin is sharper and the whole photograph may have a suspicious glowing hue. The men seem to have lost those unsightly pores overnight.

There’s a word for this, of course. In a handy linguistic twist, “photograph” (照片, zhàopiàn) can very easily become “photo cheat” (照骗, zhào piàn), courtesy of a little wordplay and a lot of makeover apps.

“I can hardly imagine one would post selfies without editing them first, never me. It’s just a few clicks to make us look better,” a 28-year-old HR specialist at a joint venture company, surnamed Chen, told TWOC. “Many CVs we receive use beautified photos to make a better first impression, with probably greater potential to gain an interview.”

So which apps are the most popular in China? How do you go about creating your own “photo-cheats”?

To answer the first question, a report released in June by the Sootoo Institute, the research wing of a Beijing internet company, ranks MeituPic, BeautyCam, Pitu, Camera360 and Faceu rank as the top five. But Meitupic and Beautycam are overwhelmingly the most popular, with over a billion cumulative downloads; the former has even achieved international fame, with Time magazine ranking it 17th among the 25 “Best iPhone and Android Apps of 2017.”

The other three manage 0.2 billion downloads each. This is all ranked on data collected from six major app-download platforms including 360 Mobile Assistant, YingYongBao, and Hiapk.

Ease of use and positive feedback are key reasons for the success of some apps, and not others.  Unlike, say, Adobe Photoshop, mobile apps can be applied in a download-and-use approach, handy for beginners, and, crucially, (mostly) free of charge. It doesn’t take long to master all the key functions.

MeituPic, BeautyCam, Pitu, Camera360 and Faceu all have two main functions of camera and photo editing with various sub-functions, including filters, beautifying (makeup, smoothing, skinning, reshaping, slimming, brightening, highlighting, etc.), but differ in detailed design of those sub-functions. So how do you use them?

MeituPic was developed by Xiamen-based Meitu Inc in 2008. Based on personal information such as age, gender and favorite filters (decided during installation), the app provides a customized user interface. For women, naturally, it’s pink. There is so much pink. A clear layout allows users to explore and master each function in minutes, but total mastery takes longer.

In contrast to MeituPic, which emphasizes editing photos, BeautyCam, also from Meitu Inc, was originally designed as a dedicated selfie app. However, its functions have been increased and updated in many ways.

Created by Tencent, Pitu stands out with certain features, like “Crazy ex-face,” “GIF Emoticon,” and “It’s My Childhood”.

First up, no, the “Crazy ex-face” function does not allow you to angrily vent on past boy or girlfriends by defacing their pictures. Instead it allows users to make themselves resemble famous TV show and cartoon characters. After the TV show The Empress of China, featuring actress Fan Bingbing, was aired, a function on Pitu allowing people to resemble Wu Meiniang (Empress Consort Wu) became an immediate hit in many Asia-Pacific countries and regions, including Malaysia, Vietnam and China, along with Taiwan, Hong Kong and Macao, sending the app to No.1 on the downloads of many of those countries and regions. Created by Chengdu Pinguo Digital Entertainment Ltd., Camera360 was one of the “Top 100 Tech Products” in 2011. According to the official website, it now has over 200 million users worldwide. In addition to the basic functions of photo editing, it distinguishes itself with its own album for photo management, and a social platform where users can view, follow and start a hot topic, as well as share photos on other social media.

Faceu’s key feature is related to the idea of 萌 (méng, literally playing cute/innocent). It does this by letting users alter their  appearance for entertainment purposes. After starting Faceu, users can find the ready camera interface and choose the effect they want, add friends on the app, and share photos on other social media. Similar to Snapchat, photos by Faceu are only “available for a short time before they become inaccessible.” 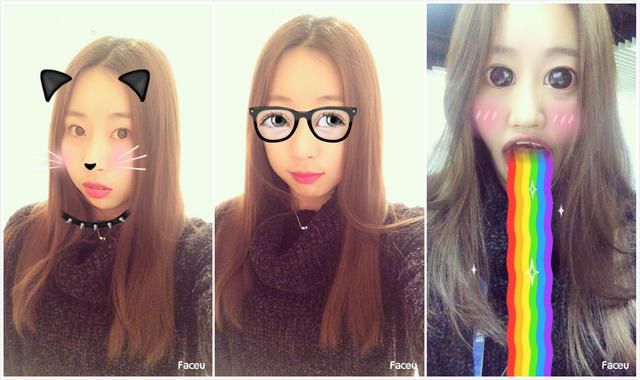 Sounds interesting? Give them a try. They’re certainly cheaper and less dangerous than plastic surgery.