Liu Ke’s looks often allude to military themes. He owns US Navy jackets, and it’s not uncommon to see army insignia sewn onto his pants. Today, doing light physical labor in 30-degree temperatures, he is “dressed down”: green fatigues, a US Marines t-shirt, and leather shoes by a company that outfitted naval officers during the Normandy landings.

These items are procured from cities like Seattle, Los Angeles, and New York, which Liu visits around three times a year. Aside from the clothes, these trips produce a bonanza of envy-inducing photos for his social media feed. A jaunt in April to Orange County boasted copious shots of blue skies and Elvis memorabilia, earning a respectable 101 Weibo “likes.”

But these posts aren’t made just to show off: As owner of Beijing’s Mega Vintage, Liu is a leading member of China’s budding community of second-hand apparel clothing aficionados. It’s a role that requires converting wary consumers to a particular collectors’ lifestyle, in addition to making sales. 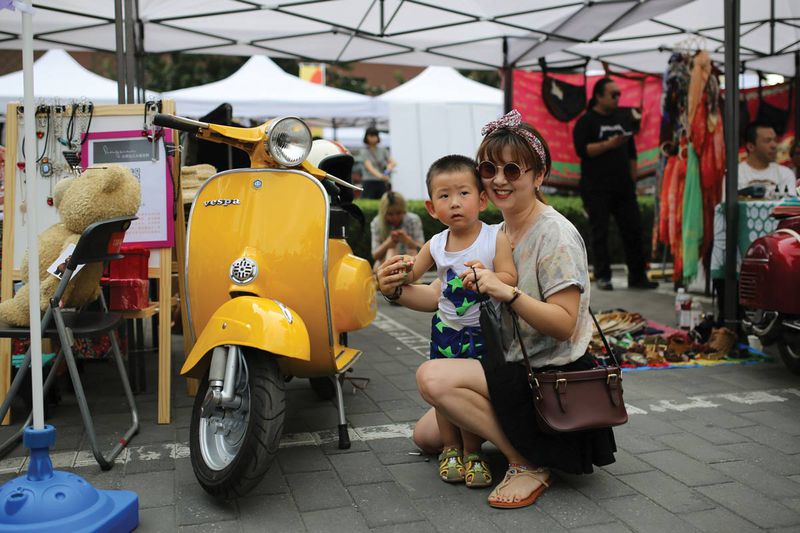 Though it only opened in 2009, Mega Vintage is one of the oldest shops of its kind in China. Liu specializes in American apparel primarily from the 1920s to the 1980s, which qualifies as “vintage” in fashion circles (anything older is “antique”). “When I first started, there was a complete gap in the Chinese market,” Liu says, “and what’s more, unlike Western countries, we don’t have this continuity in our fashion history: No cultural basis for appreciating, reviving, or improving old styles.”

Elvis snapshots offer ways to partly fill this gap, educating followers about the culture his products come from, as well as allaying fears about thrift clothing, showing vintage wear as a commonplace activity. “In the US, vintage is very much part of how people outfit themselves every day, and these shops can be found anywhere, but Chinese people still have many prejudices about the concept,” Liu says.

These are mostly a cultural aversion against buying second-hand—either the idea that it’s a loss of face to wear another’s “castoffs,” or superstition about used items containing the yin energy of previous owners—as well as persistent rumors that vintage clothing is actually “foreign trash” (洋垃圾 yánglājī). During the 1990s and early 2000s, factory rejects, donated castoffs, even clothes rumored to have been taken off dead people were regularly smuggled and sold in bulk in Chinese border towns—to many who lived through that less-prosperous era, going vintage is no different. 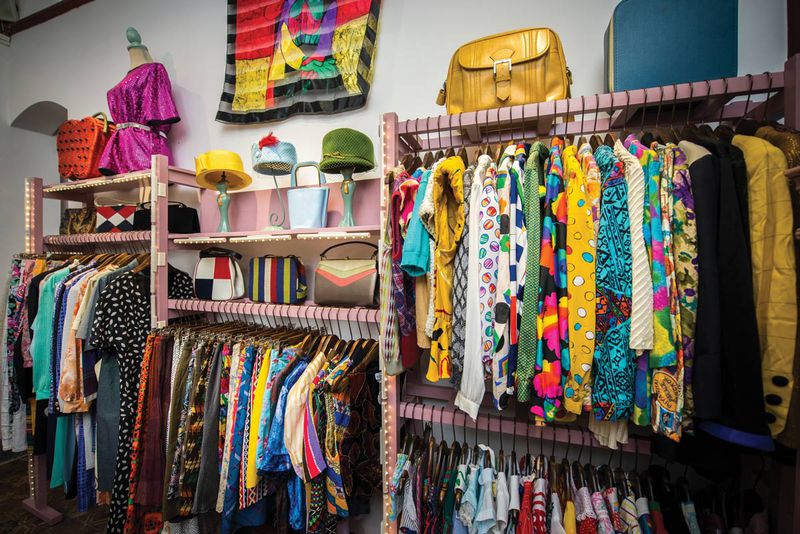 Even more adventurous consumers among the urban middle class grapple with the fact that the origin, styles, and the historical eras of vintage items all tend to be foreign. This means there still isn’t an exact Chinese translation for the concept of vintage. One can choose, like Liu, to scatter the English word in conversation like a trademark, or compromise, as other vendors and fashion bloggers do, along with the Chinese-sounding guzhuo (古着, “old wearables”)—which is actually a loanword from Japan. In the 1980s, Japanese consumers discovered furugi (as 古着 is read in Japanese) as a price-conscious way to keep up with global styles during an economic recession.

Today, in major fashion capitals of the West, charity and high-end consignment shops combine to offer a mix of preowned trash and treasure. But after authorities cracked down on the selling of “foreign trash” in the last decade, “vintage” or guzhuo in China now usually refers to high quality, one-of-a-kind items, curated from overseas at considerable time and expense by the vendors themselves—and as such, the industry is expensive, geared more toward fashion mavens and white-collar workers than broke students. 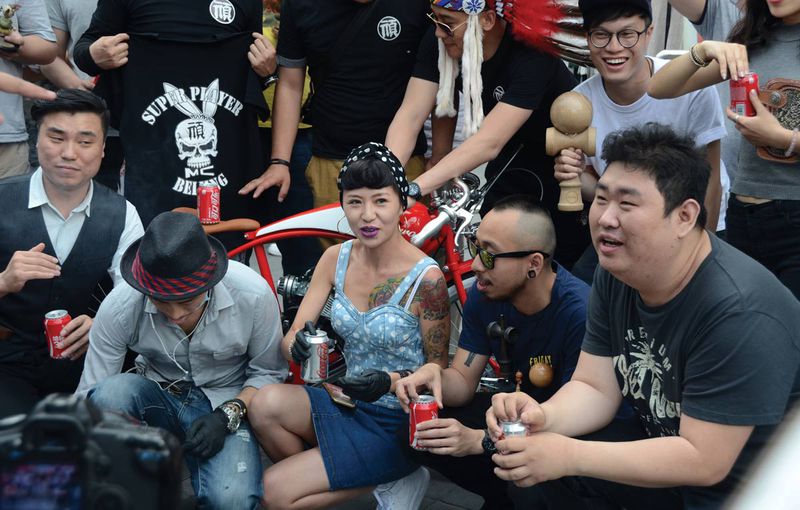 The prices reflect the market: Items rarely drop below the hundreds even in Liu’s store, which claims to sell “everyday wear” from the era. For the handful of vendors specializing in luxury vintage, such as Fendi luggage and Chanel suits, items can run into the high thousands or tens of thousands—but are nonetheless snapped up by regular customers once they appear on the vendor’s social media account.

All this means there are now businesses turning to Japanese furugi as a sometimes-cheaper alternative to Euro-American vintage. In lieu of a physical shop, vendors who are just starting out, have a day job, or live outside of major cities economize by starting an e-business, sometimes renting stalls with summer “vintage fairs,” which tour the country and double as opportunities to hobnob with related interest groups, like indie jewelry-makers or vintage motorcycle fans.

Though welcoming of this diversity among his fellow vendors, Liu is already afraid of an over-commercialized future. “Those who sell vintage simply because they think it’s trendy, or do it for money, it’s irresponsible,” he insists. Liu even refuses to sell his wares online, unlike most of his colleagues, saying,  “For this kind of product you need to come in and feel the ambience. Touch the clothes and try them on, talk to the owner, to feel its quality and understand its history, instead of just consuming a product or style.” 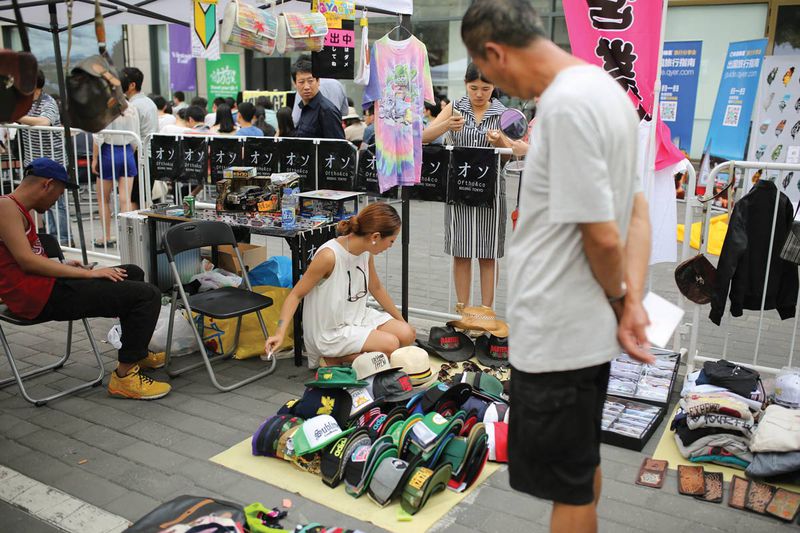 Some vendors eschew opening a physical store, and instead travel with fairs all summer long (VCG)

These concerns still feel like remote luxuries for the growing body of merchants based in second and third-tier cities, though. Song Zihang, a shop-owner in Chengdu, admits he “almost never goes a day without explaining to a customer what vintage is.” In Guangdong, formerly a hotbed for foreign goods hustled in via Hong Kong, vendor A-Mai says that her city is “always about half a step behind Beijing and Shanghai when it comes to fashion—we aren’t very open-minded.

“We’re still at the step of trying to get people to accept, then fall in love with vintage. My idea is that ‘vintage’ means it was ‘loved’ and cared for, not just used, by past generations,” A-Mai says. “In that sense, to sell vintage is more like being a cultural ambassador than a merchant.”

For Liu, on the other hand, this role is already filled by the clothes themselves. “They’re objects for connecting with culture in the past, and Chinese history doesn’t have them—well, all right,”—he corrects himself—“we have things like Zhongshan suits, but other than perhaps the qipao, clothes with Chinese characteristics aren’t part of fashion history the same way Western clothing is.”

“When you see Doc Martens being revived in the streets, traces of military ‘Ringer tees’ on items at Zara or Uniqlo, instead of just buying it because you think it looks nice, you can find out how these styles were inspired and how people used to wear them,” he adds. “That’s the experience I want to provide.”

Pick of the Mix

From cities to eras, vendors choose their favorites 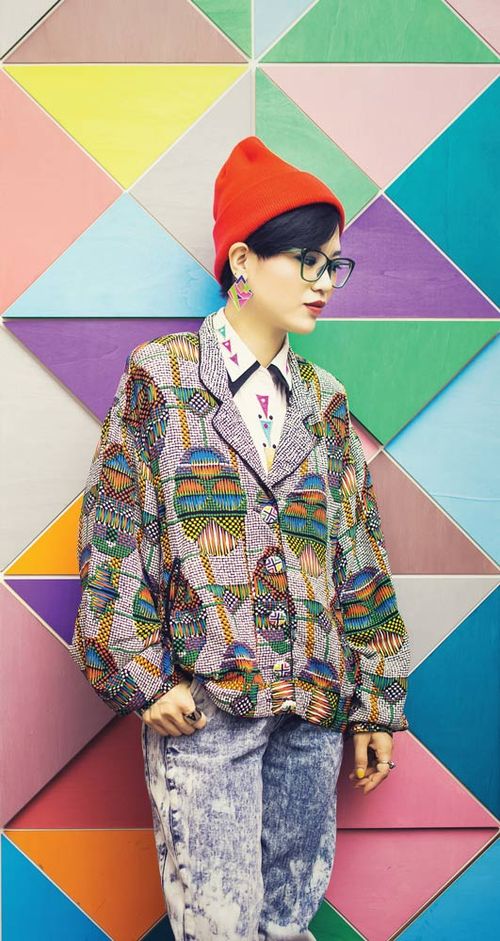 E-shop, 回首已是百年身 (“When You Look Back, 100 Years Have Already Passed”), Zhongshan, Guangdong 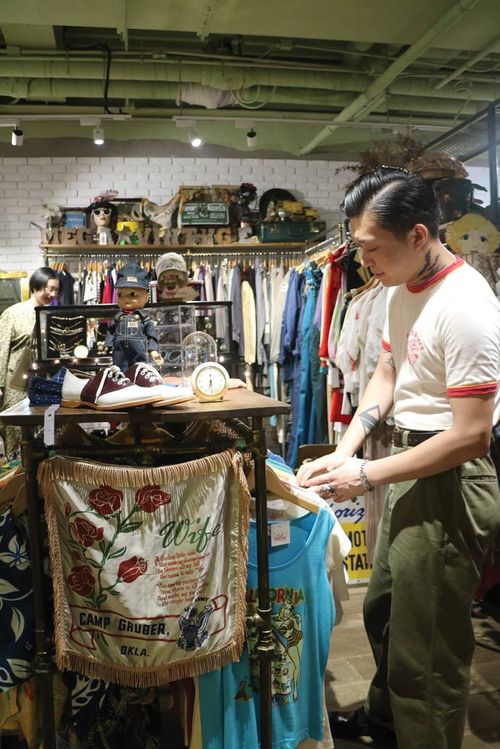 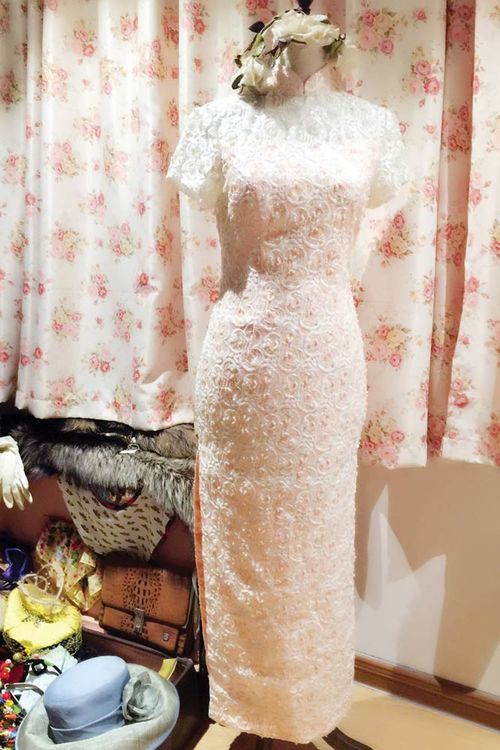 Vintage Values is a story from our issue, “Down to Earth.” To read the entire issue, become a subscriber and receive the full magazine. Alternatively, you can purchase the digital version from the App Store.