Founded as a tongue-in-cheek celebration for lonely college students in the 1990s, Singles’ Day has long since shed any association with its participants’ relationship status. Now it’s merely an online discounted shopping bonanza, similar to Black Friday or Prime Day.

But over the weekend, outraged WeChat users believed (as in previous years) that some Taobao merchants were taking both the “shopping” and “single” aspects of Singles’ Day a little too far, as the following pictures, offering “Vietnamese brides, Vietnamese wives, Vietnamese girlfriends”—with a side order of objectification—“seven-day returns…between a B and D cup size…guarantee that they won’t run away” suggest: 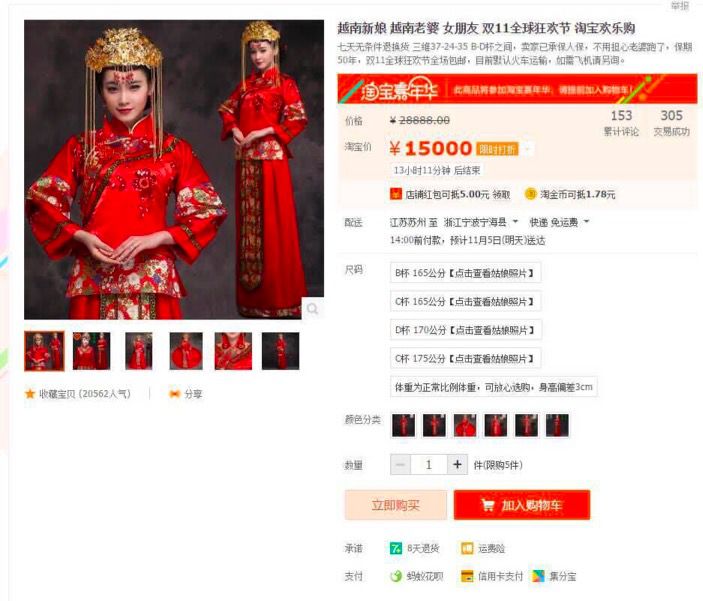 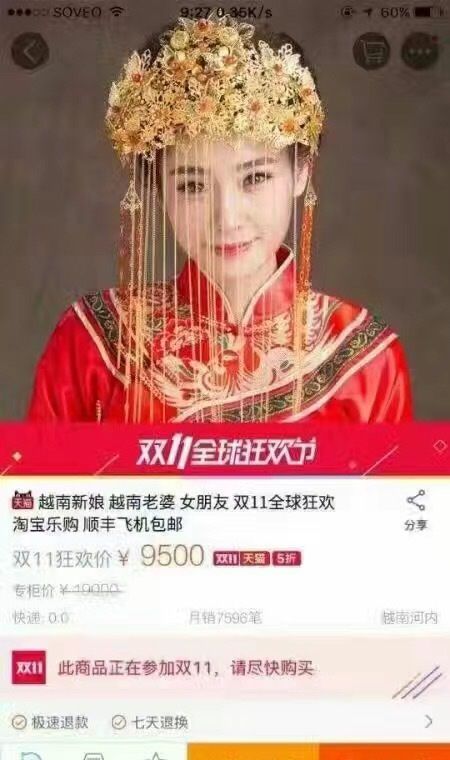 The ads, fortunately, appears to be hoaxes as far as anyone can tell: Similar pictures have circulated every November 11 since at least 2012, and the words return no search results on Taobao (though the Yangcheng Evening News has previously reported getting results for Vietnamese wedding outfits and gifts). In 2015, according to Youth.cn, a mail-order bride ad was put up to drive  traffic to a small-time Taobao store whose bestselling item were socks for 1.6 RMB—and was taken down shortly after it attracted criticism.

Taobao’s rules for merchants, of course, forbid “selling products prohibited under national law,” which trafficked humans certainly fall under. It can’t be denied, though, that the internet has made it more challenging to supervise the selling and buying of people. In 2013, authorities cracked down on several matchmaking sites offering Vietnamese bride “group buying” services. The practice had been reported since at least 2011, and referred to organizing single men to take trips to Vietnam and choose potential partners—20,000 men reportedly signed up on November 11, 2013.

The role of the matchmaking service is to arrange the itinerary, with paperwork for the woman and perks such as a wedding banquet and photographs included in the 30,000-50,000 RMB fee; since 1994, it has been illegal in China for third-party organizations to arrange cross-border marriages.

However, web platforms offering “Vietnamese matchmaking services” and trips can still be found on the web today, and “group buying” were being reported in 2015 and 2016, organized through shady channels on WeChat. Hong Kong’s Sing Pao Daily News reported that “matchmakers” could be found on WeChat who would send pictures of potential brides to men in China, and arrange a visit to Vietnam. Alternatively, according to China Daily, they could arrange video conferences with the women. WeChat has also been described as a communication tool between brokers at various stages of the trade, with translation software facilitating their communication across different languages.

By some estimates, 70 percent of all women trafficked from Vietnam have been bound for China. Trafficked foreign women in China also come from countries like Cambodia, Laos, Mongolia, and North Korea (where the threat of deportation makes them especially vulnerable). Many trafficked brides are sold to the impoverished rural areas, where the effects of China’s skewed gender ratio have hit hardest: of the 30 million “bare branches,” or unmarried men with no prospect of marriage, expected in China by 2020, 20 million could be in the countryside. These are also areas hardest hit by skyrocketing bride prices. In Guizhou, one of China’s poorest provinces, it costs 88,000 RMB on average to marry a local woman, up from 20,000 in 2013. In Shanghai, where it’s highest, the price has crossed the million mark, most of it “paid” in the form of an apartment. By comparison, it’s 60,000 to 100,000 RMB to “buy” a wife from abroad (the ultra-low “group buying” offer being an exception).

Chinese authorities have reported rescuing several thousand women of “foreign nationality” between 2009 and 2016, with more than 1,000 people arrested, and last year returned 207 Vietnamese women from a major trafficking ring. The rescues and crackdowns tend to be individual efforts by local law enforcement—in response to the Singles’ Day “group buying” scandal in 2013, the Department of Foreign Affairs’ statement reminded Chinese citizens to be aware of being scammed.

Aside from the dating sites themselves, internet platforms are not held accountable for trafficking information disseminated by their users, though the issue has been discussed in Europe. In September, the US Congress saw a bill that would allow state attorneys general and trafficking victims to take legal action against internet companies—Facebook, Amazon, and Google among them—for exploitative content provided by their users.

On the side of the trafficked women, it has been reported that social media tools like Facebook have enabled traffickers to lure increasingly younger victims in more ingenious and less detectable ways. China’s new internet law, which stipulate real-name registration on internet platform and hold moderators of social media forums responsible for content shared by users, could achieve a similar effect.

Even China’s infamous online “girl/boyfriend rentals”—once a fun way for singles to mock those with pushier parents at Spring Festival than themselves—have been reported to have lead to sexual assault for some women who’ve rented themselves out online. Taobao finally cracked down on these services in 2016, but on WeChat and internet forums, it continues to be a game of cat-and-mouse.