Belated Happy New Year to all, and welcome back to the first Viral Week of 2018. Coming up today, we bring you sexual harassment campaigns, soft drink prostitution, leggy competition between friends, and 10-year visas for foreign talent. But first…

PG One has X-rated week

PG One rose to fame in 2017 as a participant and eventual winner (one of two) of reality show The Rap of China.

Unfortunately, he seemed unable to carry his success and goodwill into 2018, as the last week has been alight with controversy surrounding the rapper.

Firstly, it was reported that PG One was seen going home with actress Li Xiaolu, who then left the following morning (December 30). Li is well known for her roles in Xiu Xiu: The Sent Down Girl and Personal Tailor, but also for being married to actor Jia Nailiang, with whom she has a daughter.

But PG One’s downfall was not done yet.

Due to unwanted attention that the scandal brought, the Communist Youth League decided to trawl through PG’s songs and found one that encouraged listeners to take drugs, and insulted women. They publicly criticized PG on Weibo for his lyrics.

PG has since apologized for the song and pledged to remove the song from online platforms—and blundered straight into another sorry controversy, by blaming “black people” for his vulgar opinions.

Meanwhile, Jia released a statement (again on Weibo) in which he explained his feelings, apologized to Li for perhaps not being a good enough husband, implored the public to let them handle the matter themselves, and ended with a cliche involving the rain and sun.

Has #MeToo finally come to China? Sort of. A PhD graduate from Beihang University in Beijing has posted accusations on Weibo that she was sexually harassed by one of her professors, Chen Xiaowu, 12 years ago.

In her post, Luo Qianqian says that she was influenced by the Weinstein scandal and #MeToo movement. She hoped that her testimony will encourage others like her to voice their experiences.

According to Caixin, Chen has stated that he is aware of accusations made against him (there are multiple), but denies them and will leave everything to investigators. The university has responded by temporarily suspending Chen while they look into matters.

But while many have spoken out in support, the hashtag itself has not taken hold the way it has in the West. Posts with #我也是# (Weibo tags with two hashes) are more light-hearted and positive and often have accompanying selfies.

Reports have surfaced on various Chinese media on a novel method of soliciting prostitutes in and around various university areas.

The content was allegedly originally published by Tianjin Normal University on their website, and then picked up by other media outlets. 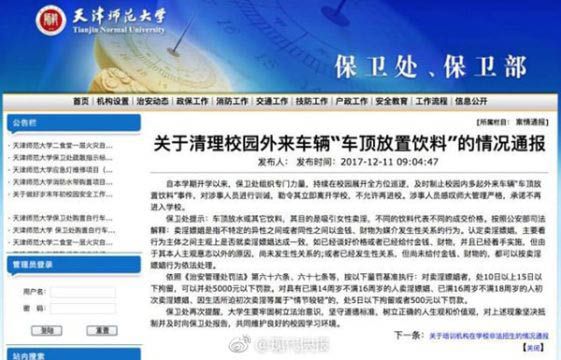 Unfortunately, much of this coverage has since been removed. The gist of the “soft drink prostitution” was that: A john pulls up in his car and places a drink on the bonnet or trunk; the type of drink indicates the price; mineral water means 200 RMB, green tea means 300 RMB, Red Bull means 600 RMB, and China’s state beverage, coconut milk, means 1,200 RMB; if a john doesn’t like what he sees, he can pretend not to know what’s happening, and explain he is just waiting.

The longer, the better

Discrimination against those with shorter legs or worse flexibility has been hitting the interwebs in China.

A compilation video was released which showed groups playing a “game” in which one shorter individual would ask, “Are long legs amazing?” and longer-legged participants would reply, “Of course they are.”

This video has encouraged those with proportionally lengthier bottom halves to, once again, display their physical attributes and lord over those whom they deem inferior.

Are you a genius? Maybe you have Nobel Prize in trophy cabinet? Or perhaps you won the World Cup a few years back?

If that sounds like you, then you may be able to obtain a new Certificate for Foreign High-End Talent, recently introduced.

With this, you will be able to apply for a new five or ten-year multiple entry visa for free! In addition, a visa will also be granted to any spouses and children (no information on whether same-sex partners are included).

The reason is because China want the best of the best to come and work on the mainland. If that’s you, congratulations. If not, then you’ll have to jump through numerous ever-changing hoops and pay a ransom just like the rest.