China is encouraging overseas experts to repatriate, but can it offer a truly welcoming environment for research?

Last February, a disbelieving US media declared scientists C. N. Yang and Andrew Yao’s resumption of their Chinese citizenship—renouncing American nationality along the way—as a triumph of Beijing’s soft power. In China, the reception was more polarized; in between state media paeans to the pair’s patriotism, a decades-old rumor reappeared on the web—that Yang, then aged 94, was out to collect Chinese retirement benefits.

“Scientist gave his best years to the US, comes home to live the high life,” began one diatribe against the Nobel laureate, who’d left China to study in Chicago in 1945 and technically “returned” in 2003, when he became a full-time professor at Tsinghua University. Underlying the patriotic bluster, there was a cynicism born of insecurity. “[It’s because] he can no longer hack it in the US,” stated another netizen, perhaps not realizing what this implied for the quality of academic research on the mainland. (Ironically, Yang who won the 1957 Nobel Prize for work on particle physics, has repeatedly urged Chinese academia to have greater confidence in its abilities).

The idea of a “brain drain,” the departure of a country’s brightest and best-educated individuals for a better international market for their talent, is a familiar heartache for most developing nations. China, however, may be the most proactive nation in the world for trying to reverse this trend. At the heart of its strategies is the Thousand Talents Plan, an umbrella initiative begun in 2008 by the Communist Party’s General Office to encourage universities, research institutes, and state-owned enterprises to develop recruitment programs for “high-level” foreign talent to lead China’s high-tech industries. Offers from local governments and institutions included not only high salaries and research funding, but in some cases housing assistance and, in certain “high-tech hubs” such as Beijing’s Zhongguancun, expedited paths to permanent residency.

While the broader initiative does not specifically target foreign researchers of Chinese origin, there are incentives like hukou assistance in Beijing and Shanghai’s programs, or healthcare from Party-affiliated hospitals in Zhejiang, that seem calculated to appeal to so-called “sea turtles”—returnee Chinese nationals who have studied and worked abroad, and who may or may not have obtained foreign citizenship. 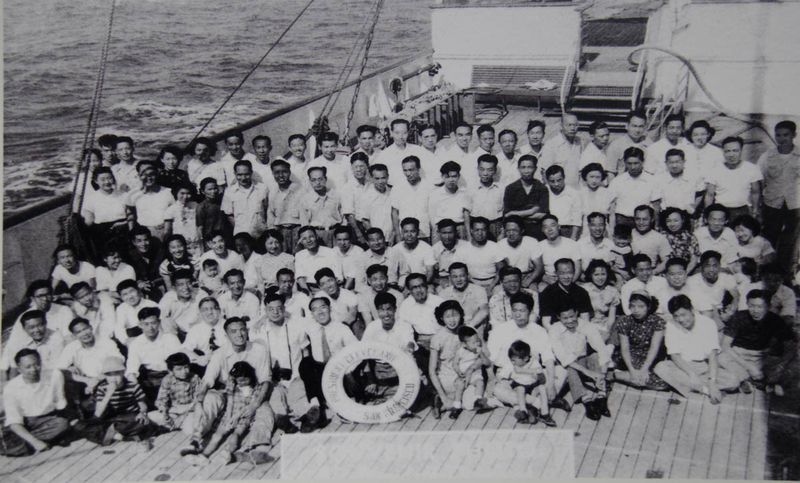 Overseas Chinese students returned from the US pose for a group photo on a ship in October, 1950. The establishment of the PRC in 1949 encouraged a wave of students, scientists, and scholars to return (Fotoe)

The pattern has served China well in the past. From Zhan Tianyou (詹天佑), the “father of the modern Chinese railway,” to “Father of Rocketry” Qian Xuesen (钱学森), the history of China’s modernization is dotted with luminaries who exemplified the ideal, once stated by famous Chinese educator Cai Yuanpei (蔡元培), of “studying without forgetting to repay the country, repaying the country without forgetting to learn.” Cai himself was a jinshi-ranked Qing scholar who went to study in Leipzig at the ripe age of 40, eventually becoming the principal of Peking University, which he tried to reform into an institution “[where] students see learning as their heavenly duty, not a step toward an official position or wealth.” As his most famous saying goes, “Knowledge will save the country.”

Cai’s thoughts were echoed by Lin Yutang (林语堂), his colleague, who spoke of “real education” being “the result of climate…a class of youths nurtured in a good atmosphere will all be erudite.” Atmosphere, however, appears to be China’s sticking point. In a blog post published on Q&A platform Zhihu in 2016, Zhejiang University biologist Liming Wang, formerly of the California Institute of Technology and UC Berkley, wrote of five factors contributing to the “research environment” preferred by younger returnees like himself: Reasonable funding to establish a lab, cooperative administrators, a fair and transparent process for research evaluation and grant application, a “natural and open” atmosphere of academic debate, and extensive opportunities for collaborative research.

On the first three counts, Wang, himself a Thousand Talents returnee, characterizes China as a crapshoot; resources and administrative support vary widely between localities and institutions. “In many, many places…your funding could be withdrawn at any time, [and] you have to run a gauntlet getting expenses reimbursed or purchasing equipment.” In 2014, the International Labor Organization reported that some scholars did not receive their promised housing benefits after coming to China, or did not receive a job at all despite sending CVs and participating in interviews.

Regarding his last two points, both addressing the culture within Chinese research institutions, Wang gives the verdict of “needs improvement,” generalizing American PhD students as “those who are passionate about research and want to make it a career…pushing the boundaries of human knowledge,” whereas, for many Chinese, an advanced degree is simply “more advanced and prestigious…making it easier to get rich or get a job.”

There are practical challenges that come with such an atmosphere: Wang writes of immense pressure for early-career scholars to publish, leading to squabbles among colleagues over the “first author” title on joint publications. Other Thousand Talents scholars and their students responding on Zhihu complained of getting bogged down with non-academic duties like administrative meetings and mandatory “social activities,” as well as the pressure to make “utilitarian” or small-scale, feasible contributions instead of groundbreaking research, and—a gripe from every respondent—constant overwork. 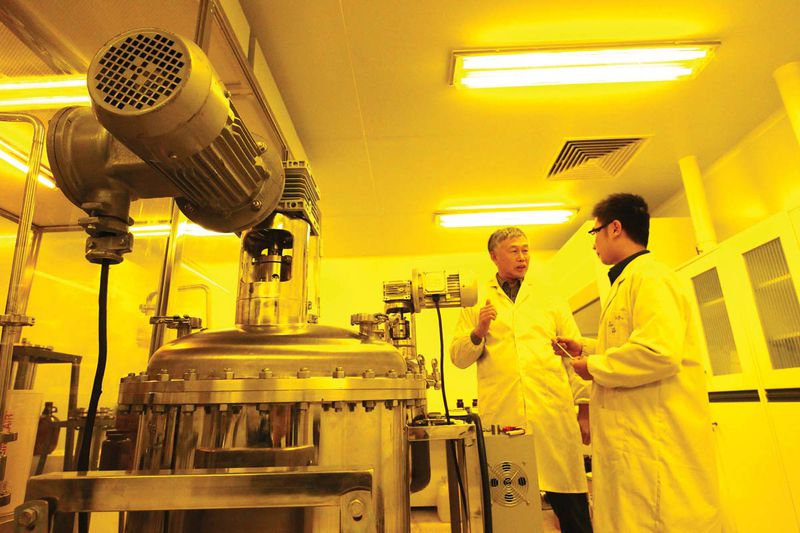 On the other hand, there are returnees who work in the private sector, or came through less prestigious sponsorship, or no official channels at all, who relish the freedom they found in the experience. Fang Tao, a scientist at Beijing AR technology start-up Futurus, had chosen to return to China to escape the pressure and what he called the “closed-off” atmosphere of another country’s research environment—in this case Japan, where he did his post-doc. “I chose to go to [where] they study the most groundbreaking topics in my field, computational chemistry,” Fang told TWOC. “But the academic field in Japan was very conservative; to get a position there you need a Japanese or perhaps a US degree, and many researchers’ ideas…are rather risk-averse.”

Thousand Talents returnee Shi Yigong, the former Princeton University molecular biologist who turned down a 10 million USD research grant in 2008 to become Tsinghua’s dean of life sciences, told The New York Times that Asians are still confronted with a “bamboo ceiling” when seeking career advancement in the US. Indeed, “push factors” could play a greater role at least for returnees from the US, as there’s evidence that the working environment is increasingly hostile to researchers of Chinese origin, as policymakers become more hawkish about the threat of a rising China. An ongoing lawsuit against the FBI by Temple University physicist Xiaoxing Xi, who was wrongfully indicted in 2015 for “unlawfully transferring technology to China,” cites a pattern of ethnic profiling and prejudice against American scientists of Chinese origin, stretching from the case of Sherry Chen of the National Weather Service, Guoqing Cao and Shuyu Li of pharmaceutical company Eli Lilly (charges against all of these individuals were later dropped.

A 2016 study by legal scholar Andrew Kim noted that the number of Chinese-heritage individuals charged under the federal Economic Espionage Act (EEA) tripled between 2009 and 2015, making up over half of all EEA defendants, and that Asian defendants received sentences twice as severe as other ethnic groups. Kim and a scientist from the US both declined to comment for this story, citing concerns for their career.

Wang cites family and cultural familiarity as other factors playing into his return, but stresses that what matters is finding the right environment for oneself regardless of the country. “Choosing a reliable ‘employer’ is the most important…China is too complicated, China has too many faces, many points of access, and it’s important to choose wisely,” he writes. Fang characterizes his own choices as “opportune.” “After I returned to China, I met up with a college classmate who started a company,” he said, “I wanted to find the right atmosphere, where there’s funding and people searching for new ideas, and this case, that was China.”

The personal and emotional pull factors also can’t to be underestimated. “In the United States, everything is more or less set up. Whatever I do [in China], the impact is probably tenfold, or a hundredfold,” Shi told The New York Times. Wang was more direct. Describing the Shanghai subway on his first day of work, he writes, “crushed by the crowd and sweating all over, I actually smiled…my first thought was, after staying abroad so long, I’ve finally come back to build the motherf-cking country!”

Rovers Return is a story from our issue, “Fast Forward.” To read the entire issue, become a subscriber and receive the full magazine. Alternatively, you can purchase the digital version from the App Store.