Smelly noodle on trains, ex-girlfriend teams up with CAS, Red Sea rises, and the consequences of a love confession—it’s Viral Week

Viral Week is our weekly round-up of the previous week’s trending memes, humor, rumor, gossip, and everything else Chinese netizens are chatting about. As non-smokers, we’d like to think of this not so much as a nicotine patch to help ease ourselves into the week, but a jolt of caffeine, or an early lunch, or that extra 20 minutes to turn on the computer and eat a leisurely breakfast before the day begins…

High-speed travel is highly stressful. A new viral video from last week shows a woman on a high-speed train in a high-powered four-minute rant against an instant-noodle eater, telling him that “everyone knows” it was prohibited to eat such foods on board and he was “scum” for doing so.

The incident triggered an online debate with most declaring that the woman was being unreasonable, though a minority believed people should eat smelly foods in the corridor or dining car. The woman now says she will brings charges against the man for infringing her rights by shooting and uploading the video.

The rail authorities have since clarified that noodle-eating is not, in fact, prohibited on board, though they urged passengers be considerate of doing so in an enclosed space. A regulation does stipulate that “food with irritant smell” are banned since it may affect “public hygiene.” Perhaps the smell of sodium and starch, along with sunflower seeds and baijiu, will soon be relegated only to the slow trains and memories of a simpler era.

Here’s a mystery for all you readers: Which researcher at the Chinese Academy of Sciences hasn’t been pulling his weight? Whoever it was, he is a drag on his team no longer, thanks to his ex-girlfriend.

Voice of CAS, the Academy’s official Weibo account, posted an article on March 8 on the efficient use of research budgets. The next day, a commenter wrote below, “Cut back on idle staff; my ex-boyfriend doesn’t do anything at CAS.” Surprisingly, CAS responded, “Which institute? What’s his name?” Then, the same afternoon, they announced, “Relevant personnel has been dealt with.” 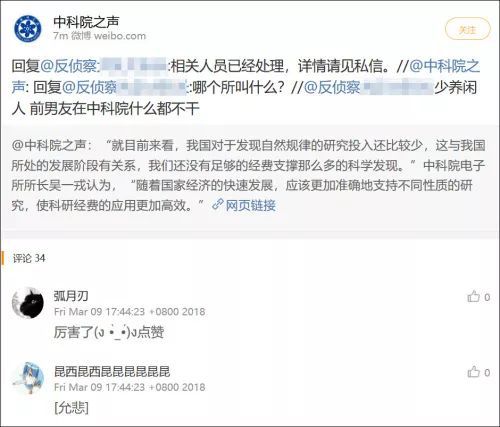 New method for dealing with ex-boyfriends and/or noodle-eaters

While this was undoubtedly a good demonstration on CAS’s efficiency, the Weibo post has since been deleted by CAS apparently at the request of the informant, and the ethics of such a swift and unorthodox response has been questioned.

Operation Red Sea has surpassed Stephen Chow’s The Mermaid to become the second-highest grossing Chinese film ever, having taken close to 3.33 billion RMB at the box office to date.

Hong Kong director Dante Lam’s film was released on February 16, the weekend of Spring Festival, and loosely based on the evacuation of almost 600 Chinese citizens and 225 foreign nationals by the PLA at the outbreak of the Yemeni Civil War in 2015 (Lam’s 2016 hit, Operation Mekong, was also based on the PLA’s intervention in the 2011 Mekong River Massacre). Like Wu Jing’s Wolf Warrior 2, the highest grossing Chinese film of all time, the patriotic flick was made with collaboration from the PLA, which provided real arms and weaponry to the filmmakers.

Zhou Xing, dean of the School of Art and Communication at Beijing Normal University, tells the Global Times that these so-called “New China military movies” succeed by adapting the Hollywood formula of “individual heroes…although they often have a close relationship with the nation.”

Fan confesses to director, everyone

Confession of romantic feelings can be an emotional minefield. This is doubly true if the object of your affection is a public figure, and already in a relationship.

On March 1, a seemingly over-ardent fan published a WeChat essay titled “I Love You, Director Zhang Yang” (which, among other things, compared herself and Zhang to the reincarnations of author Sanmao and her husband, Jose Maria Quero y Ruiz) that contained details of a past affair between the writer and Zhang, director of 1997’s Spicy Love Soup and 1999’s Shower.

On March 10, the author published a follow-up, “I Speak on Zhang Yang’s Behalf,” which not only explained Zhang’s lack of belief in marriage, but spoke on behalf of Zhang’s long-term partner, whom the author believes “will take him back,” as “the moment she chose to be with Zhang Yang, she already knew she must experience loneliness, sadness, and pain.”

Rounding things off by with a section called “Speaking on My Own Behalf,” she asked readers to “please don’t bother [Zhang and his partner] anymore…let me bear the consequences myself.” But then why go public in the first place? “When I feel like my small love story has become a societal incident, then I feel like it has value and worth.” How the hunt for soldiers and the soldiers themselves have changed