Traditional Chinese often regard procreation as a familial imperative, rather than personal choice—but not Huahua, a graphic designer living in Qingdao, Shandong province. In defiance of Mencius, the 2,000-year-old sage who advised that having no heir was the “gravest possible” filial offense, Huahua plans to remain childless, although she’s been married since 2010.

“I don’t like kids and have never thought of becoming a mother,” says Huahua. “It’s scary to imagine having a child in the family.”

Huahua had made up her mind even before she got married: “Kids are noisy. Caring for them is a hassle, and takes a lot of time and money. I want to spend my limited energy and money on my own life.” Huahua and her husband are just one of a small but growing number of families known to researchers as “DINKs”: Double Income, No Kids.

The term originated in Western countries during the free-spirited 1960s, and arrived in China in the incipient liberalism of the 80s. In the past three decades, this non-traditional lifestyle has attracted increasing public attention, though it still remains relatively uncommon.

In 2003, the analytics company Horizonkey published a survey that suggested there were over 600,000 “DINK households” in China, and more than 70 percent of respondents believed that number would increase over time. Nevertheless, exact figures are hard to come by as, technically, only those who voluntarily give up the right to become parents are truly considered DINKs. In its annual Family Development Report, though, the National Health and Family Planning Commission pointed out that the number of DINKs was “increasing rapidly” in 2014, and that DINK families began “emerging in large numbers.” 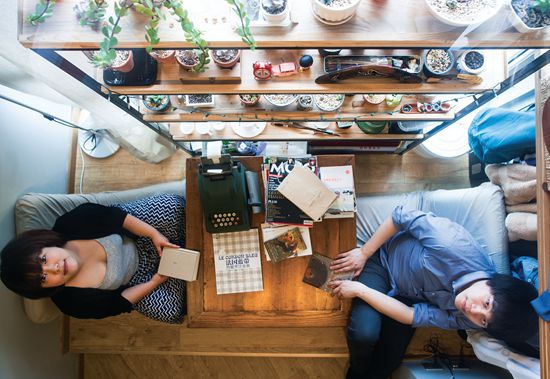 Perks of being DINKs include a cleaner home and more time for hobbies, one couple told a reporter in 2014

Interestingly, it was at the end of 2015 that Chinese officials began to gradually and formally phase out the one-child policy, as experts began to warn of a “middle-income trap”—the danger of China “growing old” before it got rich. For many middle-class Chinese, the burden of a second child appears too onerous; and for those like Huahua, even one is too much.

“When I see my friends’ kids, I never feel envious. I feel I am so lucky not to have a child,” she tells TWOC. “Most of my friends suffer from the loss of freedom, massive workload, and economic pressure of looking after their child, but I can do whatever I want, travel whenever I like, and go out at any time. It’s strange that some people think that you can’t be happy if you don’t have children.”

Experts say the rise of the DINK household is related to society’s development and increasing urbanization. There’s less pressure to have children in order to provide a family with a labor force, says Lin Xiuyun, associate professor from the Department of Psychology of Beijing Normal University, who specializes in marriage and family. “People have more freedom to focus on their self-fulfillment.”

On Baidu Tieba, the Chinese search engine’s online forum, a “DINK Bar” has existed for more than a decade, and attracted over 50,000 followers and more than two million posts. Here, fellow DINKs share their experiences and opinions about their lifestyle. Recent topics include venting about pressure from society to have kids, and horror stories about parenthood from friends—lack of money, bratty kids, and disputes about child-raising methods from old-fashioned grandparents and relatives. The slogan on the homepage proclaims, “Willing to Give Up Kids, Ready to End My Lineage.”

Unsurprisingly, such a hardline stance has instigated a backlash; there’s also an Anti-DINK Bar for users of the opposite camp. Though, to date, it has only generated 26,000 posts, most of these accuse DINKs of being “selfish.” One frequent poster believes that DINKs are simply shirking responsibility and will become a burden on society when they get older: “If everyone becomes a DINK, humanity won’t survive for long.”

Writer Guan Jun, though, believes that choosing not to have children itself is just because they want to be responsible. “Many DINK people, including me, are not insensitive to the beauty of children,” he observes in his book, Child-Free Is The Greatest (《无后为大》). “We are just worried that we may harm this beauty. This is about a life. There is no bigger decision…you can quit your job, end your marriage, even switch genders, but you cannot return a child after it is born.”

For Huahua, the argument is even simpler. “You only live once. Not everyone was put into the world for reproduction,” she says. “There are already so many people in the world; humanity doesn’t depend on me to sustain its existence.” 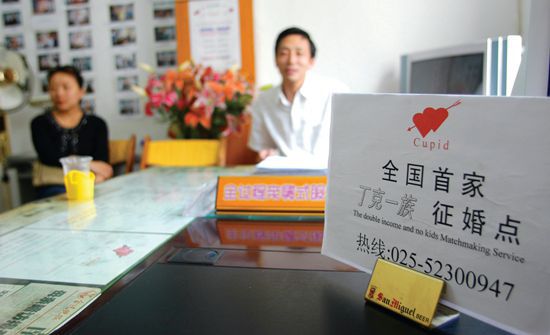 According to one Nanjing DINK matchmaking company, clients tend to be high-earning, highly educated, and born in or after the late 1970s

Of course, the real pressure many DINK couples face is not from anonymous netizens, but parents and senior family members, who can fret about issues like lineage and face to the point of obsession. “Some worry about their children’s old age; some are concerned about ‘having child to carry the family line’; some simply want to have a grandchild,” says Professor Lin. “Some others are just influenced by peer pressure: ‘My friends all have grandchildren.’ It’s like a competition.”

In ancient China, children were often seen as the sole responsibility of women. Indeed, in certain dynasties, childlessness was grounds for some husbands to divorce their wives. Nowadays, the child-free lifestyle is usually more attractive to women than men—who normally have far less involvement in the actual mechanics of bearing and raising a child anyway. “Between the two of you, who is more willing to be DINK?” asked a 2012 Netease survey aimed at couples. Over 54 percent of 2,000 respondents believed it was the female partner; only 26 percent said it was the male, and 19 percent suggested it was both.

For Sichuan businesswoman Ma Yuan, though, it was actually her husband’s idea to be childless. Now in her 50s, and one of the rare DINKs of her generation, Ma says she came to value the lifestyle over time: “Our [first] 10 years of marriage were so busy and happy, that I got used to it.”

Huahua’s experiences agreed with the statistics. Although her family has been accepting, and she has no regrets, Huahua’s husband has begun to raise doubts about the DINK lifestyle. “In the past, he said he agreed with me. But he was young; maybe he didn’t really know and just wanted to please me,” Huahua admits. Though her husband never pressured her, Huahua has been a little shaken. “If my husband and I weren’t so close, I wouldn’t care, but sometimes I think, if he really wants one…after all, he only lives once too.”

Concerns about enduring a lonely retirement spurs many couples’ reservations about remaining DINK. In Shilin Guangji, a 13th century book of folklore, “raising sons for help in one’s later life” (养儿防老) is explained as a common reason to have children. In a 2016 survey by China Youth Daily, 47 percent respondents agreed with the idea, and 38.5 percent said considerations about their old age would influence whether they decide to have a baby.

Chen Youhua, a sociology professor in Nanjing University, explains that in the past, before the modern social security system was established, the government relied on the younger generations to support its seniors.

Yet even as late 2013, China was passing legislation about filial piety, revising its Law for the Protection of the Rights and Interests of the Elderly to require those who live away from their parents to make time to visit them “regularly” (the controversial amendment was enforced only sporadically, such as in 2013, when a court in the eastern city of Wuxi ordered a woman to visit her 77-year-old mother once every two months after the pair fell out). In 2015, an unnamed beauty salon chain was revealed to be tithing some of its employees’ 3,000 RMB monthly salary to their parents to “inspire filial respect.”

Huahua points out that today’s young people often live and work apart from their parents, sometimes even in different countries—and there’s no guarantee they’d to look after parents even if they were around. “Many of the order generation don’t have much knowledge or spiritual sustenance, so they tend to spend their energy on their children,” she theorizes. “But our [generation’s] lives are more colorful; we can have our own hobbies even when we are old.”

Ma, who is now past the age of childbearing, doesn’t want to discuss regrets about her choice. “I just think the lifestyle is pretty good; love and marriage, and becoming DINKs are private matters between every couple,” she says. Huahua, for whom the question is still open, believes it’s possible she might long for a fresh familial bond in years to come, or, like generations before her, need future assistance.

But she remains realistic, even brutally so. “If I can enjoy a happy life for 60 years, why should I care about the last ten years, when I’ll probably be paralyzed?” she asks. “Today, takeout can be just sent to your door. Dozens of years in the future, what basic necessities won’t be covered?”

Some names have been changed at the request of the interviewees

“No Baby, No Cry” is a cover story from our issue, “Modern Family”. To read the entire issue, become a subscriber and receive the full magazine. Alternatively, you can purchase the digital version from the iTunes Store.