The first thing Yatou did when she found out she was pregnant was check whether she was allowed to be—until 2016, childbirth was only legal in China with a permit.

The previous year, a pregnant Yatou (pseudonym) had broken up with her boyfriend, but rather than opt for an abortion—legal, cheaply and widely available—the then-28-year-old decided to have the baby on her own. It was a decision not every woman would have risked, and for good reason.

It’s a tough business being a single mother in China. Traditionally, pre-marital sex is frowned upon and single parents stigmatized. But it’s not just being ostracized or gossiped about: On a policy level, there are obstacles as well.

For starters, the Ministry of Health bans Chinese hospitals and agencies from offering medical reproductive technologies, such as in-vitro fertilization (IVF), to single women and even couples whose reproductive plans are inconsistent with China’s family planning policies.

The current Population and Family Planning law dictates that, barring some exceptions, a married heterosexual couple can have two children. Women not in compliance with these provisions (most commonly, single females or lesbian couples) face a series of hurdles. Those who choose to brave the bureaucracy must first face a heavy fine, known as a “social compensation fee.” The rules vary from province to province, or even city to city. In Beijing, for example, the “social compensation fee” is equivalent to the average annual income. 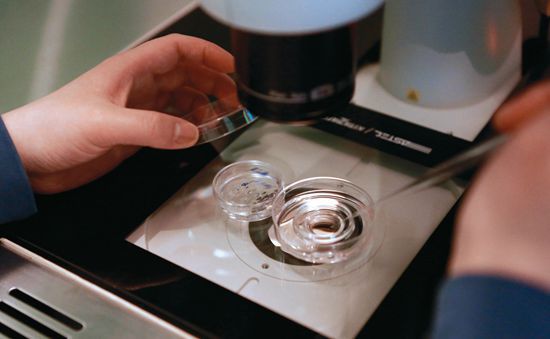 Next come obstacles regarding hukou, the household registration system that restricts Chinese citizens to receiving social benefits, such as education and healthcare, to their hometowns. Before January 14, 2016, public security bureaus would not issue a hukou without a legally registered father. Since then, the law has changed, but the bureaucratic obstacles can sometimes appear insurmountable, particularly for women of lower education or income.

“The [hukou policy] violates women’s reproductive rights and is essentially a defendant of marriage,” Fang Gang, professor of sexology at the Beijing Forestry University, told TWOC. “Women should have independent rights to decide whether they want children, even if they are single.”

Back in 2015, when Yatou made the decision to keep her child, the rules were even stricter: Most hospitals required parents to apply for a birth permit before delivery, and this needed both parents’ marriage licenses. Worried, Yatou called up former classmates, hoping to find someone in government who could pull some strings. A friend who worked in household registration had good news: Hebei province, where Yatou’s parents live, had just approved a new policy that allowed unmarried women to apply for a newborn’s hukou.

There are no official statistics concerning single mothers in China—but the government is as concerned about preserving “core socialist values” as promoting higher birth-rates to stave off an impending demographic crisis. Despite growing liberal attitudes and independence among China’s wealthier women, it’s still not widely accepted for a female parent to have a baby on her own; Yatou didn’t know what to tell her own family.

The PRC’s attitude to gender equality after 1949 had been remarkably progressive, at least initially: The emancipation of sex workers, along with the introduction of the 1951 Marriage Law, relieved millions from lifelong suffering and subjugation. The march of progress has suffered in recent decades, though, as patriarchal imperatives, family planning policies, and rampant materialism have all asserted themselves in the market economy.

In around 2000, state-affiliated groups like the All-China Women’s Federation began to criticize females who remained unmarried after 30 as “yellowed pearls” or shengnü—“leftover women.” The term became widely used in mainstream media, even as the numbers of shengnü increased: China’s last census in 2010 showed that the numbers of  unmarried women over 25 had nearly quintupled since 1990, to 14.5 million. Around the same time, the national marriage rate fell to 8.3 per 1,000 people, even as divorce rates rose 8.9 percent in 2016 alone.

Matchmakers and relationship gurus have meanwhile begun to multiply, urging shengnü “not to be picky,” and put familial obligations before their own financial independence. Many women increasingly resent this nuptial pressure, viewing it as archaic and unnecessary. Yet, still, few enjoy full autonomy over their bodies, as both the policy environment and mainstream values frame women’s reproductive rights as falling under a broader societal supervision.

The law lags behind social progress. Even with the 2016 amendments, for example, fines for extra-marital pregnancies persist, and single women must seek any fertility treatment abroad. 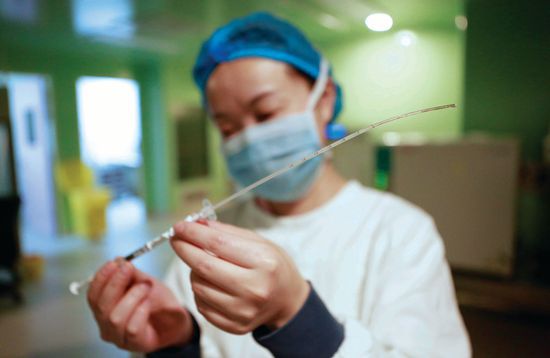 In 2018, the Family Planning Commission declared that couples using assisted reproductive technologies no longer need to apply for a family planning certificate (VCG)

In 2015, actress Xu Jinglei, then 41, had her eggs frozen in the US, telling Chinese media that “elective fertility preservation” was the only way she could justify the decision to delay having a baby. At that time, her decision roused nationwide discussion, especially among single women. China Central Television, making its position clear, immediately issued a Weibo post reminding viewers that unwed women were not allowed to pursue such treatments in China.

But the controversy refused to die: Toward the end of 2015, a woman called Wu Xia, along with her ex-boyfriend, Shen Bolun, jointly started a crowdfunding project seeking to raise 43,910 RMB to help pay the “social compensation fee” for their “illegitimate” child.

“We both felt the policy was unreasonable,” Wu told Rainbow Lawyers, an NGO who compiled a 2016 report on unmarried birth rights, hoping to effect changes to related rules and regulations. “It’s the first baby for us both, and we didn’t add any extra burden to society, so why did we have to pay ‘compensation?’ Why was having a child out of wedlock a violation of family planning policies?” Despite an outpouring of public support, there were many who called Shen “irresponsible” and Wu “shameless”; after a while, the project was forced offline.

By the time Yatou finished her first trimester, she’d finally decided to tell her parents—via text message. “Dad, I’m pregnant. I can’t tell you the father, but I’ve decided to have the baby and raise it on my own,” she wrote. There was no response, so the next day she apprehensively called to gauge their reaction. But to her surprise and relief, her father was completely fine with the situation; he had even read the message aloud to her mother when he received it.

Her extended family, on the other hand, was less than impressed.

Yatou was invited to appear on a Shanghai Broadcasting Network panel about the family-planning policy; filming, though, soon veered into a debate about the morality of unmarried motherhood. One guest used her own experience growing up in a single-parent family to list character flaws that she claimed children would be bound to exhibit without a proper father figure. 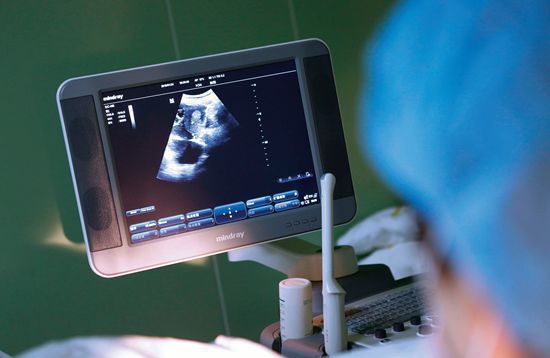 Parents applying to use assisted reproductive technologies must still present a marriage certificate, their ID cards, and a birth permit (VCG)

“Some of my relatives watched the show, and vehemently opposed the idea of me having the baby by myself,” Yatou recalled. “They kept calling my father and telling him to stop my ‘senseless’ actions.”

But Yatou’s example of motherhood proved better than her extended family expected. After her son, Jiu’er, was born in January 2016, she raised him by herself, all while running a small hostel in Dali—a popular destination in Yunnan province for foreign backpackers, artists, bohemians, and middle-class Chinese seeking a break from the metropolitan mill. During the off-season, she took Jiu’er on trips, sometimes even as far as Southeast Asia. Before Jiu’er was two, he’d acquired a passport; photos on Yatou’s WeChat Moments, a social media feed, showed her climbing hills and posing next to rivers, all with Jiu’er in a bamboo basket on her back.

“Gradually, nobody questioned me anymore,” she said. “People who saw my Moments knew we were doing just fine.”

There were certainly hardships. Money was often tight; Jiu’er’s father only paid a single month of child support, breaching his signed legal agreement. Yatou sued and won, but the verdict wasn’t enforced, and he continues to refuse to pay child support, citing various reasons such as being unemployed; Yatou had to find a second job to keep the family afloat.

Now, as more women become accepting of the idea, other prospective mothers have started looking into alternatives to China’s strict pregnancy policies.

“Lots of unmarried women reach out to us to try to have a baby, including LGBT groups,” explained a female representative at agency US-Sino Infertility Bridge (anticipating that the company would stonewall media, TWOC’s reporter visited as a potential client). Her answers showed ready experience handling questions, patiently explaining how the agency pairs requests from China with foreign donors from sperm banks in the US, then flies clients in for IVF treatment. A single full procedure costs 29,000 USD. 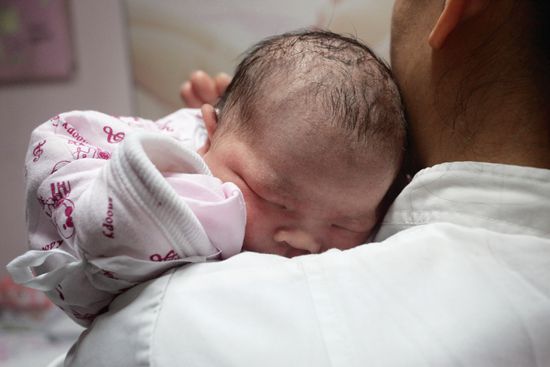 In 2011, the first baby in Shaanxi province conceived from frozen eggs was born (VCG)

According to the agent, clients have a full range of options, including the race, education, or blood type of donors. A sample document sent to TWOC showed a childhood photo of the donor, identified only by an ID number. The credentials also included his race, blood type, height, weight, eye color, hair color, education, career, family medical history, and hobbies, and even included personal observations from the sperm bank: “He’s shaped like an athlete, with strong bone structure and muscular arms. He has a friendly and warm smile…speaks in a kind manner, is considerate and thoughtful.”

On Q&A site Zhihu, China’s version of Quora, women frequently share their experiences and questions about the procedure. One user, in a recent thread, said she saved up 700,000 RMB to get IVF in the US because she couldn’t find anyone she wanted to marry; as she already has a house, car, and senior position at a multinational company, she didn’t feel the need to settle for any Tom, Dick, or Harry.

“I can see the reasoning behind that,” Yatou said. “Some of my friends, their husbands don’t really do anything around the house or help take care of the baby. It’s no wonder more and more [women] don’t want to get married.”

One exception to the rules regarding fertility treatment is Northeast China’s Jilin province, whose family planning regulations dictate that “women who are of legal marriage age [18], who decide not to marry…can take appropriate medical reproductive technology to have one child.”

According to the Rainbow Lawyers, in practice, Jilin’s guidelines have met with backlash from local hospitals, who fear going against national regulations. Ma Hu, one woman named in the NGO’s report, inquired at several Jilin hospitals and government offices whether an unmarried woman can use IVF to have a baby; instead of an answer, Ma found the buck was simply passed between departments.

To lobby for more progressive legislation across the country, Rainbow’s Zhan Yingying mailed Jilin deputies ahead of this year’s National People’s Congress in March, asking them to propose that all hospitals should allow fertility treatments for unmarried singles, including freezing eggs, and adding that the public was broadly supportive of the policy.

A week before the “Two Sessions,” Zhan finally received some positive feedback, with one delegate saying that he would be willing to hand in their proposal. “We were counting on the topic to be more widely covered, and hoped to force the government make a statement,” Zhan told TWOC. Instead, nothing further was reported by the relevant health departments—and the delegate simply stopped responding

Unmarried, With Children is a story from our issue, “Modern Family.” To read the entire issue, become a subscriber and receive the full magazine. Alternatively, you can purchase the digital version from the App Store.