The moment I stepped off the plane at Yanji airport in northeast China, pictures of Korean traditional marriage garments (hanbok) lining the sky corridor caught the eye. Hungry for some old-school Korean food, I made a beeline to a food stall selling tteok, a chewy, if often flavorless rice cake that, despite being a workout for the jaw, is a staple Korean dessert.

The tteok was exquisitely dull—as it should be—but the process of buying was essentially Chinese: Payment was through a WeChat QR code, the exchange of pleasantries conducted in Mandarin. The stall owners, wearing in purple and green hanbok, were ethnic Koreans, though, officially known in South Korea as jaeoe dongpo (“compatriots who live abroad”) and in China Chaoxianzu (朝鲜族). With a population of around 2.5 million, Koreans are one of the largest ethnic minority groups in China.

I had arrived in the county seat of Yanbian Korean Autonomous Prefecture, the officially designated home of Chaoxianzu and the city with the largest amount of ethnic Koreans in China. Although there are considerable Chaoxianzu populations in tourist hotspots like Harbin and Dandong, these cities have little to no overt traces of their culture. It is only in Yanji that the Korean alphabet’s straight lines and circles can be seen on the first row of every single shop, bank, and road sign, making this city “home” for China’s Koreans. 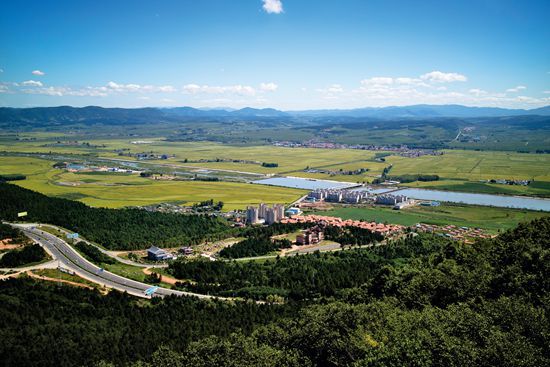 A view of Yanji from Maor Mountain, part of a national forest park

Classic South Korean tunes blared from a loudspeaker installed in front of one of many local produce stores. My ears pricked up upon hearing the deep, warbling voice and upbeat tempo of “What About My Age,” a cover of the 2015 Oh Seung-Keun song, beloved by middle-aged Koreans. It’s a song that nostalgically reflects on Seoul’s romantic 70s, when life was slower-paced and the city was less developed than neighboring capitals Beijing and Pyongyang.

Seoul has since become a modern metropolis, and it’s Yanji that’s now lagging behind. Apart from a few government buildings, well-lit bridges, and the nightclub-filled central avenue, Yanji’s aesthetic is rather gray and rugged. Its appearance reflects the city’s depressed economy, a consequence of emigration to South Korea that began after the establishment of diplomatic relations in 1992.

My landlady, Ms. Ri, was one of the few Chaoxianzu who had never worked or lived in South Korea. Instead, she grew up near Shenyang, the capital of Liaoning province, with few Chaoxianzu neighbors, never developing the bilingualism that is key to many Chaoxianzu’s job prospects in Korea—jobs which pay up to three or four times the average salary in Yanji. Embarrassed at being unable to converse with me in Korean, she called over her nephew, a high-school student, who, after some initial shyness, started reciting whole poems by Yun Dong-ju, a Korean poet born in Yanbian.

He went on to show me how his friends like to talk in a hybrid Korean-Chinese: “Let’s get a taxi” is oori chuzuche-rel taja, where for the Mandarin word for “taxi,” 出租车(chūzūchē), is “Koreanized” by adding the accusative particle rel. Watching the whole exchange with delight, Ms. Ri suddenly giggled. “My husband is lucky that my Korean is so bad.” 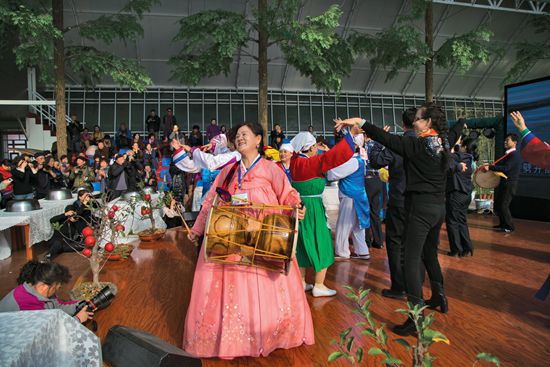 Ms. Ri explained that in recent years, Yanji has developed a common problem with unemployed Chaoxianzu men who are too lazy or scared to move to South Korea, choosing instead to stay home and drink bottles of fermented soybean wine, the Chaoxianzu’s favorite alcohol. Their spouses, used to making a living and being diligent housewives at the same time, often feel as if there is no other choice but to abandon their husbands for new lives in South Korea—either by landing a job or a Korean bachelor. Fortunately, Ms. Ri, chuckled, not only is her Korean not good enough to escape, but her husband is a hardworking policeman and dedicated father.

Gossip at the local Han Chinese-run hair salon also revolved around the incompetence of Chaoxianzu men, compared to women. Apparently, both Han and Chaoxianzu locals consider marriage between a Han male and Korean female to be a match made in heaven， the logic being that Han men are too proud to slack off work, while the industrious Chaoxianzu housewife is a pleasant contrast to the supposedly fiery and independent Han woman. Conversely, explained my stylist, everyone is against the opposite pairing: A Han woman is bound to rage at the chronic laziness of a Chaoxianzu husband, while her lack of domesticity will annoy the Chaoxianzu man, accustomed to strict patriarchal values that pervade even modern, progressive Korea.

Listening to these tales made me eager to hear Chaoxianzu men’s side of the story. Ambling around the streets, I spotted a traditional Korean BBQ restaurant; most of the customers were sitting with legs tucked under long, rectangular tables, enjoying ssam: grilled meat enfolded in lettuce with rice and a red chili paste called gochujang, devoured in one mouthful. I walked in and asked for two servings, and the waitress promptly brought pincers and a tray of sirloin cuts, which I began carefully barbecuing. 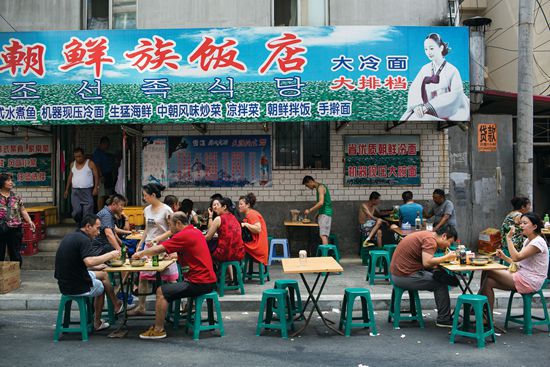 Three elderly-looking Chaoxianzu men caught my eyes. At a small table crammed with half-finished plates and empty bottles of soju, they were talking animatedly over the detritus of their meal, with hand gestures to match. After eating, I walked over, getting ready to respond in the exaggeratedly polite manner Korean etiquette demands.

Surprisingly, they were quick to invite me for a drink, and the conversation flowed. All three were retired, having worked many years in South Korea in two-to-three-year stints. They seemed grateful for the opportunity to increase living standards for their families and themselves. One proudly noted that, after a particularly successful business venture with Woori Mart, a Korean food chain seen all around Yanji, he had bought not just one, but two apartments in Yanbian.

But the lure of money was not enough to induce them to stay in Korea permanently; after experiencing life “back home,” they all preferred to retire to Yanji: “Even though we are all one people, South Koreans treat us like foreigners,” one complained. 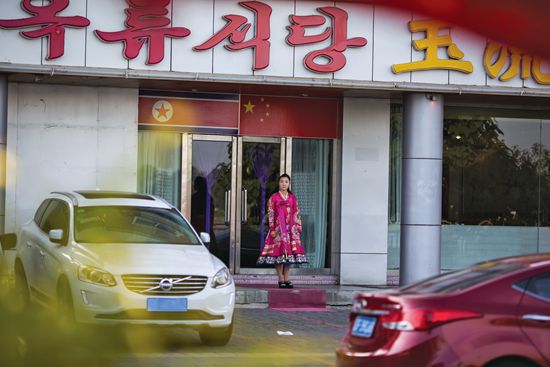 It is well-known that Chaoxianzu experience social discrimination in Korea: There are immigration policies that make it harder for Chaoxianzu to receive a working visa than other diaspora Koreans, and Yanji’s Chaoxianzu typically obtain manual labor jobs. In Korean cinema, they are associated with criminal activities.

At the same time, they feel the pressure of an increasingly competitive job market in China. According to one local shopkeeper, many Chaoxianzu parents are increasingly fearful that their children’s bilingual education will put them at a disadvantage when competing against their monolingual Han peers in the gaokao. These fears have led to the rapid decline of Korean-language public education in the prefecture over the last 30 years. In 1990, Yanbian was home to over 1,000 Korean elementary schools; by 2009, this number had fallen to 31.

But while the functional use of the language is dwindling, the city’s attachment to Korean culture remains strong, with organizations and museums dedicated to its preservation. Every other Sunday, thousands of Chaoxianzu flock to the Yanji People’s Stadium to watch Yanbian Funde Football Club, currently competing in the second-highest tier of the Chinese Super League. The team has three major fan bases, all of whom chant in turns in Korean and Mandarin, “Our nation is the greatest!” Over half of Yanbian Funde’s squad is Chaoxianzu, and the manager is South Korean. 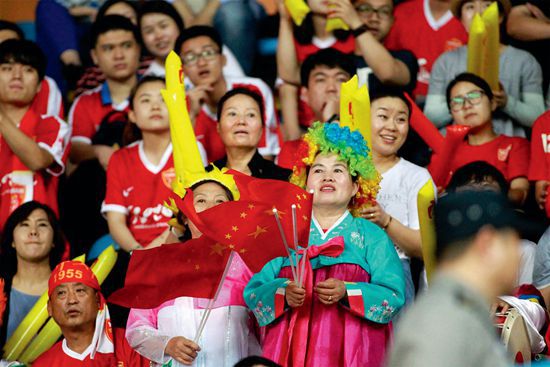 Only two blocks from my lodgings is a music center run by North Korean teachers, sent from Pyongyang to offer Korean drum classes to all ages. Sitting in on a class for senior citizens, I noticed the close relationship between the teacher and her students, most of whom were her age or older. I suddenly remembered something my uncle, a retired Seoulite and history buff, told me: The Korean dialect spoken by the Chaoxianzu is from Hamyong, a province now part of the Democratic People’s Republic of Korea (DPRK)—another reason for the complicated feelings between Chaoxianzu and South Koreans.

Although interactions with North Koreans are the exception rather than the norm for Yanji’s Chaoxianzu, the city itself gets frequently embroiled in relations between China and the DPRK. During Kim Jong-un’s two previous visits to Beijing, the prefectural government sent elite performers from the Yanji Cultural and Arts Research Center to entertain the Supreme Leader with traditional Korean music.

Perhaps the most memorable moment of my five days in Yanji was visiting the poet Yun Dong-ju’s birthplace, which has been turned into a permanent exhibition by the prefectural government. Located in the tiny village of Myeongdong, 50 kilometers from the city, the exhibition has received thousands of visitors from Korea since it opened in 2012, all looking to pay homage to a literary giant whose works they had read in elementary school textbooks. 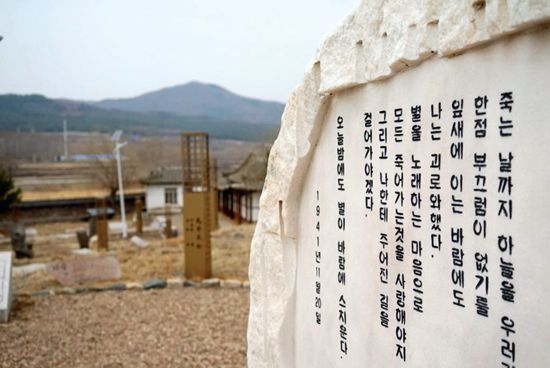 Poet Yun Dong-ju’s poem “Foreword’ is carved on a rock outside his birthplace in Myeongdong, Yanbian prefecture

Yun’s poetry combines a child-like appreciation of nature with deep introspection, using simple yet beautiful language that anyone can understand. Koreans’ admiration for him is also connected to his tragic fate: Born in 1917, seven years after Japan’s annexation of Korea, Yun was active in the Korean independence movement, but died at the tender age of 28, just six months before Japan’s capitulation to the Allied forces. His most famous poem, “Foreword,” reflects the sadness he felt as a Yanbian Korean, exiled from his ancestral home with no way to return:

Wishing not to have

So much as a speck of shame

Toward heaven until the day I die,

I suffered, even when the wind stirred the leaves.

With my heart singing to the stars,

I shall love all things that are dying.

And I must walk the road

That has been given to me.

Tonight, again, the stars are

Brushed by the wind.

Seeing these words engraved onto rocks, bronze towers, and marble plaques in the village allowed me to visualize poetry in a way I never had before. Against a backdrop of traditional Korean houses (hanoks) and pine trees, reading Yun’s poetry was like an exercise in remembering how to look again at the world with the eyes of a child. Simple happenings—a rainy night or household chores like laying the laundry out to dry—were immortalized in verse form by Yun, who seemed to find beauty in everything.

The village shares its name with another, much more popular tourist destination: the Myeongdong district in the center of Seoul. Large groups of Chinese tourists on shopping sprees can often be found in this area, which is known for its cosmetics industry. The tranquility of Yanbian’s Myeongdong is a startling contrast to the relentless consumerism symbolized by Myeongdong in Seoul, mirroring the fates of the two cities themselves.

Content with this fitting end to a five-day immersion in China’s Korean culture, I bought some dull tteok to eat on the plane—for want of hoisting one those poetry-hewn rocks to take home, as a souvenir of those precious few hours I spent wandering around, lost and starry-eyed among the verses that an uprooted poet wrote down a century ago.

“Korea Town” is a story from our issue, “The Masculinity Issue”. To read the entire issue, become a subscriber and receive the full magazine. Alternatively, you can purchase the digital version from the iTunes Store.