On select Fridays, TWOC will be presenting a basic lesson on speaking like a native of a certain region of China. This week, it’s the turn of Shaanxi.

In preparation for 2017’s acclaimed TV drama White Deer Plain, producers made the cast lose up to 30 pounds and get a tan in order to play turn-of-century Shaanxi peasants—but controversially, chose not to write dialogue in the characters’ regional dialect (fangyan).

This decision was explained in a press conference by creative director Zhang Jiayi, a native of the northwestern province where the drama (and the novel it’s based on) is set: “Learning Shaanxi dialect puts a lot of pressure on non-Shaanxi actors, and would have been a burden on their performance.” Indeed, in 2012, an all-dialect adaptation of the novel had gotten mixed reviews, in part due to some inauthentic examples of fangyan.

A branch of Central Plains Mandarin, the dialect of Shaanxi province has connotations of being down-to-earth and rustic, though this may just be confirmation bias. Decades of films like White Deer Plain and Chen Kaige’s Yellow Earth (1985), and Communist propaganda from Yan’an in the 1930s and 40s, have portrayed China’s northwest is an unending landscape of big skies, yellow soil, and hardworking folk living off the land. 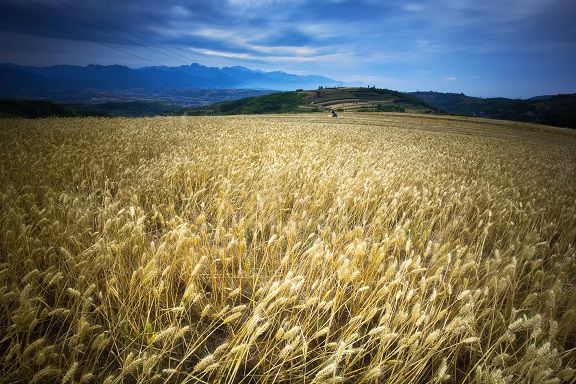 Shaanxi in the popular imagination (VCG)

Shaanxi’s fangyan is further subdivided into the Guanzhong (central), Shannan (southern), and Shanbei (northern) varieties. Guanzhong is considered the standard, as it’s spoken in Xi’an, the provincial capital. Shanbei is strongly influenced by the Jin dialects from neighboring Shanxi province. The central and southern varieties, though part of the same family as Standard Mandarin, have a number of unique features:

To help prepare for your next trip to the land of the terracotta warriors and roujiamo, learn the following phrases from a native speaker:

谝闲传 (piàn hánchuán) is a word in the Guanzhong, Shannan, and Jin dialects for idle small talk, and sometimes means “to boast.”

I’ve been under a lot of stress lately; don’t bother me.

包 (bǎo) is similar to 别 (bié) in Standard Mandarin, used to instruct someone not to do something. 木乱 (múluàn) is a Shaanxi word for anxiety or unease. It comes from a folk verse called the “Muluan Poem,” which goes: “The grass shyly sprouts/ The big tree hides the glare of the sun/ I ask you how you’ve been/ And hide my muddled feelings in my heart.”

I don’t have it here; go check over there.

No problem! I’ll take care of it.

么麻达 (memá da), or “no problem,” appears frequently in Shaanxi dialect, giving the locals a reputation for being frank and eager to lend a hand.

This roujiamo is awesome! I wolfed down two in one sitting!

One word that many non-Shaanxi natives often try to mimic is “嫽扎咧”(liáoza lie), which means “very good” or “awesome.” The first character, 嫽, comes from an oracle bones symbol referring to a beautiful and clever woman. “咥” (dié) is a word in Guangzhong and some Henan dialects, meaning “to eat greedily” or “wolf down”—quite a suitable reaction to Xi’an’s juicy pork sandwiches.

Special thanks to Vivian Wang for her contribution to this fangyan lesson.